Adam and the Eco-Fascists 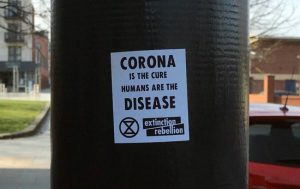 Yes, it would be a great name for a punk rock group. But the Adam in the title refers to the original one, the first man. And the eco-fascists are contemporary environmentalists gone wild.

Adam was placed in the Garden of Eden, famously, “to work it and to guard it” (Beraishis, 2:15). The latter phrase is regularly held aloft by some who are deeply concerned with humanity’s effects on nature. Preserving the state of flora, fauna and the landscape, they say, is nothing less than a Biblical mandate.

The Torah does in fact enjoin us elsewhere to not waste useful things, and that prohibition can certainly be applied to wanton destruction of any sort, including of animals and the environment. And we are charged, too, with preserving our health, so efforts to minimize harmful pollution are proper as well from a Jewish perspective.

But the Jewish religious tradition’s take on the words “to guard it” is radically different from conservationists who seek to draft it to support their cause. According to Midrash Rabbah, the “work it” refers to using six days of the week to earn our livings, and the “guard it” refers to ceasing work on Shabbos. The Zohar sees the “work it” as a charge to heed the Torah’s positive commandments, and the “guard it” as a warning to not violate its prohibitions. No true Jewish source interprets the verse as an ecological mandate.

Again, wantonly destroying nature is against the Torah’s guidance. But using nature, even destroying parts of it, for the benefit of humans is, well, precisely what nature is for. Man is no mere part of nature; he, as the creation with free will, is its lord.

Rejecting that reality underlies the ideology of the eco-fascist movement, which considers the supreme political model to be a world in which an authoritarian government requires individuals to sacrifice their own interests to the higher ideal of nature. Man, according to that conviction, is a mere fragment of nature, not its apogee.

Last week, Earth Day, the annual demonstration of support for environmental protection, was commemorated around the world.

Most who mark that day are simple conservationists, promoters of recycling and advocates for legislation to help ensure clean air and water. Some, though, are eco-fascists.

And this year, they celebrated the coronavirus.

As one particularly popular social media posting put it: “Air pollution is slowing down. Water pollution is clearing up. Natural wildlife is returning home. Coronavirus is Earth’s vaccine. We’re the virus.”

Another giddily gushed: “This isn’t an apocalypse. It’s an awakening.”

Others called attention to the wonderful “unexpected side effects” of the virus, like swans and dolphins swimming in the canals of Venice.

Leaving aside the fact that swans regularly appear in some of Venice’s canals and that an accompanying photo of “Venetian” dolphins was in fact taken at a port in Sardinia, hundreds of miles away, the thought of celebrating a deadly germ is mad. No, actually, it’s evil.

Most people don’t realize it, but contemporary radical environmentalism has its roots in an earlier fascism.

The Third Reich’s “Blood and Soil” propaganda campaign explicitly linked “non-Aryan” people on German soil with degradation of the environment. Hitler and his minister Hermann Göring were avid supporters of animal rights and conservation. Germans who violated Nazi animal welfare laws were sent to concentration camps.

Of late, white supremacists have adopted the Nazi “Blood and Soil” slogan, and it was chanted at the 2017 Unite the Right rally in Charlottesville, Virginia, by torch-carrying racists.

The gunman who murdered 51 people in Christchurch, New Zealand last year disclosed that he was an eco-fascist concerned about the threats of climate change, overpopulation, and immigration. “They are the same issue,” he wrote. “The environment is being destroyed by overpopulation… Kill the invaders, kill the overpopulation and by doing so save the environment.”

The shooter who later killed 23 people in the El Paso massacre was connected to a manifesto that lamented the fact that “The environment is getting worse by the year,” and, addressing the public, continued: “Most of y’all are just too stubborn to change your lifestyle. So the next logical step is to decrease the number of people in America using resources.”

Returning to last century’s eco-fascists, Nazi Propaganda Minister Joseph Goebbels, in his private diaries, described Hitler as someone whose hatred of the Jewish and Christian religions in large part stemmed from the ethical distinction these faiths drew between the value of humans and the value of other animals.

Well, the führer was on to something there. The eco-definition of “to work it and to guard it” stands in stark contrast to the phrases’ true meanings.

Humans are qualitatively different from animals. Imagining otherwise might seem like a harmless conceit. In reality,  it is a very dangerous one.