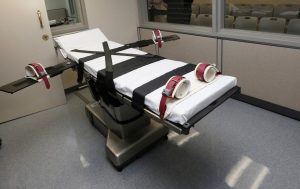 So accustomed are we to incarceration as punishment that it’s easy to forget that punitive confinement is entirely absent from the Jewish mesorah.

To be sure, the Torah allows for – and even describes two cases of – the jailing of suspects, but only as a temporary measure, until guilt is established or ruled out. The idea of prison as punishment is a relatively recent one, usually traced to the 18th century British philosopher and social reformer Jeremy Bentham.

And, at least in the U.S., prisons often seem to harden criminals. I have often wondered if corporal punishment might present a less onerous and more effective deterrent. That idea might be shocking, but, the concept of long-term confinement with other criminals, were we not so used to it, would be just as disturbing.

Ironically, Bentham conceived of prison as a replacement for capital punishment. But while Britain, like all European countries except Belarus and Russia, no longer has a death penalty, here in the U.S., both prison and execution survive as penal institutions.

With that move, executions are now an option in cases of serious crimes, most commonly murder with aggravating factors, for the federal government, the military and 29 states.

The case for capital punishment is robust. From the Torah’s universal statement in Bereishis (9:6) that “Whoever sheds the blood of man through man shall his blood be shed,” to the logic of death as a deterrent for would-be murderers, to the reasonable desire that potentially fatal menaces be permanently removed from society, to the high costs of lifetime incarceration, the idea that there are times when human life may properly be taken strikes most of us, “pro-life” as we may be, as rational.

There are those in other religious communities (and in some Jewish ones, too, that hew to values outside the mesorah) who disagree, of course, who consider the killing of a cruel murderer to be no different from what the murderer himself has done. But most of us understand that, as per Koheles Rabbah (7:16): “Anyone who is merciful in the face of cruelty will end up being cruel when mercy is in order.”

And yet, at the same time, that aphorism’s second clause indicates that there are times when mercy is, in fact, indicated.

Which leads to the strongest argument against capital punishment. No, not the “cruelty” of a possibly painful death. Opioid overdoses, which unintentionally resulted in the presumably pain-free, if tragic, deaths of more than 72,000 Americans in 2017, would certainly, administered purposely, seem to be a humane means of execution.

No, what makes the death penalty objectionable is the deeply disconcerting fact that it has led to the execution of innocent people.

Christopher Tapp narrowly avoided becoming one of them. In the end, the Idaho Falls, Idaho, man wasn’t sentenced to death but only to a 30-year sentence for attacking and murdering a local woman. Last month, though, after serving 20 years of his sentence, Mr. Tapp had his conviction vacated by the District Court of the Seventh Judicial Circuit. DNA evidence had led to a new suspect, who confessed to the crime. There are many such stories, including about people on death row.

In 2014, University of Michigan law professor Samuel Gross published a study in Proceedings of the National Academy of Sciences that determined that at least 4% of people on death row were or are likely innocent. Professor Gross has no doubt that innocent people have been executed.

Some wrongful murder convictions have been due to sloppy forensics, others to police or prosecutorial misconduct, others to mistaken identification, others still to alleged jailhouse confessions that turned out to be bogus.

Few of us likely need to be reminded of Rabi Elazar ben Azariah’s contention in the mishnah (Makkos 1:10) that a beis din that executed one person in 70 years was labeled “violent.” The standard of proof required in Jewish law in capital cases is exceedingly high. In American law, despite the common assumption, it isn’t.

Still and all, Rabban Shimon ben Gamliel’s caution, at the end of that same mishnah, that too much lenience when it comes to murder will increase the murder rate, can’t be ignored either.

Legislators aren’t clamoring for my advice about capital punishment. (Believe me, I’m no less surprised than you.) But if they were, I’d personally suggest that when there is even the slightest chance that an accused murderer, no matter how heinous the murder, might not be guilty – when it is only evidence or the testimony of one or two eyewitnesses that lead to a conviction – the death penalty should not be applied.

After the recent El Paso and Dayton mass shootings, President Trump announced that he would ask the Justice Department to propose legislation to subject those who commit mass murders to capital punishment.

In such cases, or others where the public nature of the crime leaves no doubt whatsoever about a perpetrator’s guilt, his execution is eminently defensible.

But where a jury’s guilty decision was based only on individuals’ testimony or indirect physical evidence, we should be very wary of applying so unarguably permanent a penalty.