The Final Volume of the Rav Soloveitchik Chumash 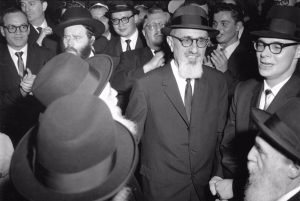 What would Rav Soloveitchik zt”l say about the separation of children and parents by ICE agents? The question is inherently silly, like all questions of the form “What would X say,” where X is someone important who has not graced this planet for some time. The question is not asked about people who are simple and predictable. We ask it only about complex, interesting people whose responses might surprise as well as illuminate. Their very complexity makes it impossible to know what they would say about a situation that they did not face in their lifetimes.

What is worthwhile considering is that we wouldn’t even ask the silly question about virtually anyone in a leadership position of the Torah world, because they all refrain from commenting on issues that don’t immediately impact Torah Jews. That realization leads to two questions. Why did Rav Soloveitchik choose to be different? And how did he bring his Torah personality to bear upon issues in the world outside the daled amos of halacha that he loved so dearly?

We have no choice but to leave the first question to the various interpreters, family members, etc., who have disagreed for decades about who R. Soloveitchik was. About the second question, our problem is where to begin to wade through the voluminous material that he left behind.

The serious students of R. Soloveitchik know where to begin. It is the rest of us who are bewildered. Some five years ago, a new door into the world of R. Soloveitchik opened up. With the recent publication of Devarim, the Mesoras HaRav Chumash is now complete.

What will the reader find here? Here are a few unrelated thoughts from the new volume, a kind of sampler, if you will.

Even groups that consistently supported the President called him out on the separation of children issue. While they saw the justice in incarcerating those who attempted an end-run around US immigration restrictions, they were uneasy with warehousing children, even if it was the parents who had put them at risk. We cannot put words into the mouth or Rav Soloveitchik. But we can draw on his words to give elegant form to our feelings:

Any law that is not tempered with sympathy and kindness, any statute that is merely a decree bereft of love and understanding, is classified as wickedness. Justice itself can turn into a system of iniquity and malice if it is administered with all its force. (pgs. 292-3)

What do we make of “proofs” of G-d’s existence? To some in our community, expressing even doubt about the existence of such proofs is proof of heresy. Others are equally adamant that at least some of those proofs simply don’t work today, and evidence incomplete knowledge of contemporary science. They find Rav Elchonon Wasserman zt”l’s argument unpersuasive and completely at odds with their own experience with agnostics they have met. Who is correct? R. Soloveitchik’s words are refreshing:

“Lift up your eyes on high and see, Who created these.” The religious consciousness does not offer decisive proofs, draw inferences, or make deductions. It “senses” and experiences G-d….These words of Isaiah…or the Rabbinic statement that there cannot be an illuminated castle without an owner or leader are not meant to refer to abstract logical proofs or complicated demonstrations of G-d’s existence. On the contrary, they refer to the immediate awareness that overcomes man who sees G-d in the innermost essence of the world as well as in its surroundings. (pg. 296-7)

Rav Soloveitchik here neither accepts nor disputes the validity of the proofs. He simply rejects them as unnecessary and even irrelevant to core belief, which grows out of the individual connection to HKBH.

A theme you heard much about in the Golden Age of kiruv a few decades ago was the enigma of global anti-Semitism. One of the items that was thrown out for consideration was the destructiveness of it – of how populous we would be if not for the scourge of Jew-hatred. Rav Soloveitchik has a different take on the size of the Jewish community:

Had Jews reproduced naturally over the generations like other nations, there would today have been at least 150 million Jews. As a result of repeated persecutions and assimilation, we are instead a tiny people…But that is not coincidental, for it reflects the abiding truth of the Torah’s statement, “For you are the fewest of all peoples.”…The greatness of its faith and people lies precisely in its remaining small in number…As a result of our small numbers we have avoided the fate of other peoples and faiths…Only a select group can be expected to maintain the strictures and responsibilities demanded by our faith. Had either Rome or Arabia converted en masse to Judaism, the result would inevitably have been the thorough dilution, distortion, and ultimately the disappearance of Judaism as a religion.

This passage should give us pause things happening in our community, as it grows by leaps and bounds, BH, while others shrink. Too often we are seeing that there is a cost associated with rapid growth – one of “dilution and distortion” of the real Torah mission.

It is only with the completion of the set of the Mesoras HaRav Chumash that we encounter an important biographical detail about my friend Dr. Arnold Lustiger, its editor, who has emerged as one of the most important voices in bringing the Torah of R. Soloveitchik to its widest audience yet. Contrary to what people might expect, Dr. Lustiger never attended Yeshiva University. He is a Philly product; his sons learn in Lakewood. He writes in the introduction to the new volume: “In 1973, I was a sophomore studying materials engineering at Drexel…In that year, the Rav was invited to deliver a faculty colloquium at UPenn. I was not at that time familiar with the Rav, and went to hear the lecture without any real expectations. In that lecture, the Rav explained the idea behind juxtaposing ge’ulah and tefillah…He interrelated halachah, psychology, and Platonic ontology. Upon leaving the lecture hall, I asked myself why it had taken so long for me to encounter this extraordinary figure…”

In sharing this, Dr. Lustiger captures an important element of his accomplishment. Many people in the larger Torah world could not care less about interrelating “halachah, psychology, and Platonic ontology.” There is nothing wrong with that. They are increasingly discovering the most important role of R. Soloveitchk, as a massive talmid chacham, whose chiddushei Torah have, in the decades following his death, spread throughout the Torah world. Yet there are others who very much are looking for ways to make the different spheres of knowledge less disjoint. Not to diminish the distinction, the havdalah, between kodesh and chol, but to show how the kodesh can illuminate the chol, without a dualistic assertion of opposing universes.

Those who indeed wish to show how “halachah, psychology, and Platonic ontology” can work together without sacrificing the primacy of the first will find a good introduction in the Mesoras HaRav Chumash. Devarim is now in the bookstores.