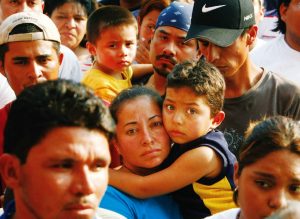 While Democrats and Republicans were trading verbal punches – and misinformation – about immigrant children last week, an adult immigrant riveted the attention of a crowd, and then the world, as he saved a child’s life.

Mamoudou Gassama, a 22-year-old Malian Muslim who, via Libya, took a perilous boat journey to Italy, and from there traveled to France, had been sleeping on the floor of a migrant residence in Montreuil, outside Paris, sharing a cramped room with six others and unable to work legally.

He has legal immigrant status now, though, and a potential job with the Paris fire department, after he saw a four-year-old boy hanging from an apartment building balcony railing in Paris and, in a feat of bravery, mettle and physical prowess, clambered up four stories, pulling himself from balcony to balcony until he reached the child, grabbed him, and pulled him back to safety.

The incident reminded some of the actions of another Malian Muslim immigrant to France, Lassana Bathily, who hid Jewish customers from an active shooter in a refrigerated room at a kosher grocery store during the January 2015 terrorist attacks in Paris.

The partisan spat on these shores concerned, in part, the separation of illegal immigrant children from their parents.

Some liberal activists tweeted photos of detainees at the U.S.-Mexico border in steel cages, including one of a cage occupied by young boys, and blamed the Trump administration for breaking up immigrant families.

As it turned out, though, the photos were from 2014, when Barack Obama was president.

Among those who gleefully pointed out the error was President Trump. But he erred himself in a subsequent tweet exhorting his followers to “put pressure on the Democrats to end the horrible law that separates children from there [sic] parents once they cross the Border into the U.S.”

There is no such law, and the policy of separating children comes, in effect, from current administration policy, which automatically considers all who cross the U.S. border to be violators of criminal law. Under U.S. protocol, if parents are jailed, their children are separated from them. As to the 2014 photos, they were of children who arrived at the border without their parents.

Immigration, particularly for us Jews, is a fraught issue. There is understandable fear of arrivals from majority Muslim countries that espouse rabid anti-Israel and anti-Semitic attitudes. And yet, on the other hand, immigration to the U.S. is overwhelmingly from Mexico, China and India. And most of us American Jews are ourselves descended from relatively recent immigrants. Can we refuse others seeking opportunity, and often refuge, in our country?

Thoughtful Jews, I think, have two issues here to consider: The optics and the essence.

By optics I mean: What do we want recent immigrants and potential immigrants, legal and undocumented, to see? Jewish hands raised in a gesture of “halt!”, or extended in welcome? Yes, there may be incorrigible bad apples among potential immigrants (like there are among citizens). But there are many more wholesome imported fruits, even exemplary people like Messrs. Gassama and Bathily.

Does being a vocal part of the anti-immigration, deport-the-undocumented political camp offer any practical gain, beyond garnering the appreciation of alarmists and xenophobes? And does that gain, such as it is, outweigh the potential achievement of good will from immigrants, current and future?

And by essence I mean whether immigration is itself something positive, and whether undocumented immigrants should be regarded with sympathy or suspicion.

The threat of immigrant terrorists, so often raised in the debate, is largely a dark fantasy. The libertarian Cato Institute informs us that, based on the record, the chance of an American being murdered in a terrorist attack caused by an illegal immigrant is 1 in 10.9 billion per year. Yes, billion. Fears matter, but not as much as facts.

All that said, when it comes to how to regard immigration, reasonable people can disagree.

But all of us might consider the recent words of National Review senior editor Jonah Goldberg, a writer whose conservative credentials are beyond challenge.

“Of course,” he wrote, “there’s a kernel of truth to both sides’ awful shouting points on immigrants, but they crowd out the greater truth: Most immigrants, even those who are in the country illegally, aren’t animalistic members of MS-13… Neither victims nor villains, they are human beings desperate to make the most of the American dream as they see it.”

But maybe he just doesn’t see traditional conservatism as incompatible with compassion.