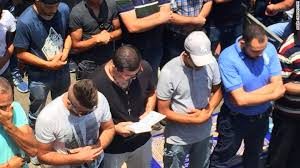 One needn’t be a Trumpaholic to know that certain media have a way of “reporting” that undermines truths.

The text, accompanied by a large photograph, elaborates:

“Nidal Aboud stood out as one among many. As the men around him bowed, he made the sign of the cross. As they chanted their prayers, he read the Bible to himself… He was the only Christian among thousands of Muslims at Friday prayers in the Wadi el-Joz neighbourhood, outside the Old City of Jerusalem.”  The prayers pointedly took place there because Islamic authorities forbade Muslims from entering the Temple Compound after Israel placed metal detectors at entrances to the site.

It was, CNN helps us understand, a “simple interfaith moment… a touching example of cooperation in a time of conflict.”

The conflict, of course, is the utterly deranged reaction of the Palestinian Authority, Hamas and the Waqf to the installation of the metal detectors, after two Israeli guards were murdered by a Muslim fanatic who emerged from the Temple Compound with a gun that he, or others, had smuggled onto the site.

No, the Christian’s joining in the Muslim prayer wasn’t “a touching example” but, rather, a typical one, of how, when it comes to irrational animus toward Israel, very different kinds of people, of entirely disparate beliefs, find common cause.