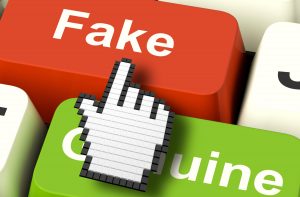 Even for someone who, in his day job as Agudath Israel of America’s public affairs director, is regularly sent dubious “news” stories from members of the public, a young man’s recent admission that he successfully purveyed total fabrications as facts was startling.

A reporter for the New York Times managed to track down Cameron Harris and convince him to talk about how, during the presidential campaign, when charges of a “rigged” election were made, he decided to make news. Literally.

The 23-year-old created an entity he called “ChristianTimesNewspaper,” and crafted a story for it that he headlined: “BREAKING: ‘Tens of thousands’ of fraudulent Clinton votes found in Ohio warehouse.” Even though no such thing had actually occurred.

Mr. Harris then located a photograph to run with the story, of a man standing behind black plastic boxes bearing the label “Ballot Box.” The photo was from a British election and the man was unidentified. But Mr. Harris gave him a name in the caption he produced for the photo: “Mr. Prince, shown here, poses with his find, as election officials investigate.”

The article beneath the headline explained that “the Clinton campaign’s likely goal was to slip the fake ballot boxes in with the real ballot boxes when they went to official election judges on November 8th.”

“This story,” a final note helpfully added, “is still developing, and CTN will bring you more when we have it.”

Electronic news moves fast these days – at the speed of light, actually – and the explosive story, well, exploded. Mr. Harris estimated that he made about $1,000 an hour in web advertising revenue as his “reportage” began to spread.

Not dissimilar was what came to be known as “Pizzagate,” another fictional claim, in this case, that the New York City Police Department had found evidence of the existence of a human trafficking ring linked to members of the Democratic Party.

The owner of one pizza establishment named in the story received hundreds of threatening phone calls as a result, and a gunman, seeking to “investigate” the situation himself, entered the eatery with an assault rifle, and fired the weapon.

Such shenanigans do not cast doubt on the election results. Even though he lost the popular vote by several million, President Trump just as clearly won the electoral vote, the decisive one. And it’s highly unlikely that fake news played any decisive role in any state. What’s more, there were mischief makers on the other side of the political contest too. Like prankster Marco Chacon, who, seeking to make the more gullible among candidate Trump’s supporters look silly, created what he called “RealTrueNews” which “reported” what Mr. Chacon assumed most people would recognize as over-the-top satire.

He overestimated the reading public, however, and many of the preposterous stories he posted were picked up and reported as fact, even by some reputable news organizations.

Fake news and hoaxes are nothing new. In 1835, a front-page article in the venerated New York Sun claimed that the British astronomer Sir John Herschel had discovered life on the moon. The story caused enormous excitement throughout the country and overseas. And it wasn’t even an election year.

It all brings to mind the words of Thomas Jefferson, who, in 1807, wrote that “the man who never looks into a newspaper is better informed than he who reads them; inasmuch as he who knows nothing is nearer to truth than he whose mind is filled with falsehoods & errors.”

The story is told that when someone told the Satmar Rav, zt”l, that the only truthful thing in a newspaper was its date, he responded that even that was an untruth, as the paper was actually printed the day before.

One needn’t take literally the charge that nothing in the media is true, though, to be healthily skeptical of anything one reads or hears. Such skepticism is all the more justified these days when the term “media” includes not only somewhat professional, if biased, reporters and interpreters of news but an army of piratical purveyors of partisanship (take that, Spiro Agnew!).

Some semblance of truth about current events can be reached with effort, by reading opposing editorial stances, doing some research to ferret out facts from falsehoods and then applying critical thinking to the results.

But the sad fact remains that, at least for consumers of mass media, the passage of more than 200 years since Mr. Jefferson made his comment hasn’t greatly changed the accuracy of his calculus.