How Assertive Should We Be?: Reflections On The National Prayer Breakfast 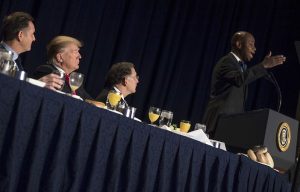 Ever since the Supreme Court decision on gay marriage, I’ve been telling evangelical audiences that communities can thrive, even when not part of the majority culture. They could learn some lessons from Orthodox Jews, I tell them. We can also learn some things from them.

Not so long ago, coming over on the Mayflower was the quintessence of Americanism. People knew the stories of the early colonies, especially as safe havens for religious practice and conscience. Religion – Christian religion – was part of modal American culture. That has changed, if only in the last few years. After a few Pew Reports on the falling retention rates of American churches, even evangelicals – the group with the highest retention rate – realize that cultural they are now swimming against a powerful stream of personal autonomy, antinomianism, and the banishment of all absolutes. They do not push back against my claim that they, too, are now part of the minority. How they have reacted to that was demonstrated, in part, at last week’s great religious event in Washington.

For 65 years, members of Congress and invited guests have gathered on the first Thursday morning in February to celebrate the role of G-d and religion in America. For many years, it has been held at the Washington Hilton, which is transformed into a huge networking landscape for political leaders and religious figures from 145 countries. Through good friends in the evangelical community, I was able to get a seat in the main ballroom (3000 seated; many standing), front and center. Another 250 sat in a satellite room and watched by closed-circuit television.

You have probably read about the President’s remarks about Arnold Schwarzenegger’s ratings on The Apprentice, as if that were the most significant part of his address. Those who sat there understood that it was Mr. Trump’s attempt at humor, and took it that way. The more substantive parts of the address got less attention. Those parts took up 90% of his time. Aside from the (irritating) bravado and some factual errors, the vast majority of the President’s remarks were serious, well-delivered, and Presidential in demeanor. Those who have not written him off, and are willing to give him and his team a bit of time to learn the ropes had reason for optimism.

The most interesting part of the presidential address did not seem to make its way to the traditional Orthodox community. In speaking about religious freedoms around the world, Mr. Trump turned to three problem areas. They were the barbaric treatment of innocent Muslims by ISIS; threats to exterminate the Jewish people; the plight of persecuted Christian minorities in many parts of the world. He mentioned them in that precise order. He is either picking up some pointers about presidential tact, employing more seasoned speech-writers, or both. Whatever our personal positions on Mr. Trump, we should be prepared to gratefully acknowledge the good things. As a community, we need to treat the office and the person with the loyalty and support they deserve, while firmly communicating with respect when we will need to differ.

The Prayer Breakfast’s embrace of religion is decidedly of one variety. The (bipartisan) organizers were extremely deferential to members of other faiths (including bringing in a sealed, reliably kosher breakfast for me), but did not adulterate their Christian message one iota. The presence of Hindus, Buddhists, Muslims, Jews, royalty (King Abdullah of Jordan was two tables over from me, sitting next to newly-confirmed Secretary of State Tillerson; I sat between the US Senator from Missouri – and put in a good word for the St. Louis Kollel – and the Serbian Crown Prince) and members of sundry parliaments did not convince the conveners to be somewhat more universal in their rhetoric. I, for one, could not blame them for that; it was their show.

The invocation was delivered by Ivanka’s rabbi, Rabbi Haskell Lookstein. I thought he was excellent. No fireworks, but he was thoroughly on target, and used perfect passages from Chazal. Where a paraphrase was more in order than an exact translation, he did so in the manner of R. Adin Steinsaltz’s famous radio series, meaning that his paraphrases did not distort the original meaning, even as they made it possible for them to be heard by outsiders.

It was impossible to determine who else was present in the room. The tables were closely packed against each other. We could not freely mingle during, or even after. In my section – close enough to make eye-contact (in my case, black yarmulke contact) with the President – I saw a sprinkling of yarmulkes. Rabbi Shalom Baum, head of the RCA, spotted me from two tables away.

Why would Orthodox Jews be there? Because it was an unusual opportunity to network with domestic and foreign political and business figures, and advance the causes near to us, including kavod Shomayim. (Yes, the Palestinians were there. So we had to be there for purely pragmatic purposes). Orthodox Jews are beginning to understand that they cannot survive in splendid isolation – not if they want to keep the respect of others, and not if they want to retain many of their own who secretly demand to be shown Torah’s relevance to a larger world.

The single person who does that best was there, and was a huge success. The Breakfast is the eponymous event in a three-day happening. Rabbi Lord Jonathan Sacks spoke a number of times with great success to smaller groups. I have been told again and again that his works on religion and science, on the need for religion, on belief in G-d, have become near-textbooks for serious Christians.

One of those was a very small gathering of moderate Muslims, Jews and evangelical Christians, exploring ways to lower tensions and increase understanding. I was asked by a dear evangelical friend to find some open-minded (but religiously serious) Jews to participate. I put out feelers in both the Modern Orthodox and charedi worlds. I found no responders in the MO community, but came to the meeting with two other charedi rabbi– and one female charedi educator! One or two non-Orthodox came, and may have understood that the Orthodox are beginning to fill the vacuum left by their shrinking numbers and shrinking support for Israel.

By now, I am used to conservative Christians volunteering that they make easy conversation with – specifically – Orthodox Jews. Aware as they are of irreconcilable differences in theology, they nonetheless sense the devotion to the Will of G-d, and the seriousness with which they regard Scripture.

This translates, again and again, into a willingness to listen to whatever wisdom the Children of Israel can bring to them from their older tradition. This, of course, is a welcome change from close to two millennia of religiously-inspired contempt and loathing for Jews. (Too many of us do not appreciate how far-reaching that change is in some churches.)

My fear is that there may be a great danger in this change. Jews used to be seen as especially evil. I sense that for some people, Jews still regarded as different, but in a more complimentary way. We are seen by some Christians as important to their understanding of their own roots, and as receivers of ancient, Divine wisdom. In some cases, this means – consciously or otherwise – that we are tolerated or respected only so long as we meet their expectations of behaving on a higher plane than others. They are often too polite to say so, but they are disappointed and confused by the many Jews who do not seem to have much regard for Scripture.

The faithfulness of Orthodox Jews to the Divine Word makes it easier for them to understand G-d’s commitment to the Jewish people. They say to us, “Surely a wise and discerning people is this great nation!” (This should not surprise us, since those are the words of the Torah itself,[1] even though we did not encounter too much of this attitude in recent centuries.) What happens, however, when the Orthodoxy that they encounter has nothing to say to them, or to inspire them? What happens when the only frum Jews they encounter show technical compliance with Torah law, but more passion for material things, rather than spiritual ones? Or speak the language of rejection, racism, or extreme isolationism? The new, positive regard for Jews and Judaism rests on assumptions about how we live, and what we have to offer them. If we don’t, will attitudes revert to the familiar ones of previous times? Could it be that our ability to engage the rest of the world is today as much of a survival tool as complete isolation was in the past?

This was the first time that I met a good number of Muslims from all over the world, all claiming to be moderate and tolerant. I had serious reservations about some. Others were so genuine, that they provided little room to doubt their sincerity. And here I encountered the same reaction that I had gotten for years from evangelicals. Muslims (from both of the groups I just mentioned) made a point of expressing their preference to speak to Orthodox, as opposed to non-Orthodox, Jews – because they understood that the Orthodox take G-d quite seriously, and because they shared their appreciation of His Absolute Oneness.

Senate Chaplain (and retired Admiral) Barry Black delivered the keynote, which was a breathtaking oratorical tour-de-force, in the best tradition of black preaching. He spoke truth to power, telling the President that neither he, nor Congress, not the Supreme Court controlled the fortunes of this country. Ultimately what mattered was only the Will of G-d.

The crowd was lifted up, energized, enthralled by his delivery. Except for the Jews – and perhaps some others. They appreciated his art and conviction, but were otherwise uncomfortable through his frequent citation of Christian themes, particularly his crossing back between speaking of G-d as Divine and as human.

Genuine goodness was very much in evidence at the larger event. As Jews, we saw for centuries the devastating effects of the power of religion when used as a force of coercion, destruction and worse. Witnessing its capacity for good is a welcome change, even when we must take strong issue with some of the fundamental assumptions of that faith. Despite those serious differences, we are left with the feeling that so many people respond to a strong inner voice speaking of the reality of G-d. They seem to become better people simply by seeking Him out, even when their conception of Him sells Him short. We can only imagine how much more transformative will be their fuller understanding of Him in future messianic times.

Dovid wrote, “I will speak of Your testimonies before kings, and I will not be ashamed.”[2] We understand the need not to be too demanding or pushy. (At least some of us do.) But we often go too far, becoming so meek, diffident and timid that we do not speak up with confidence about matters of importance to us. (The failure in some parts of the Jewish world to call out all anti-Semitic incidents comes to mind.) This is a squandering of whatever power and influence we do have, and a way to ensure that there will be even less of it in the future. We cannot compare ourselves to the numbers and influence of conservative Christians. But we should take away a bit of their assertiveness and confidence, something that they deploy even while conscious of having moved away from the bright orb of American culture, and into the penumbra.