From the Mouths of Mexicans 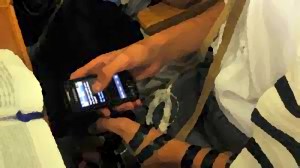 I’ll call him Pedro; maybe it’s even his name. He seems to be a custodian of some sort for a shul – though I have no idea where it might be. He wears a worn tee-shirt and speaks English haltingly; it’s hard to understand all his words in the short video a friend received from someone else and shared with me. I don’t know, or much care, whether or not Pedro’s a legal immigrant. What I know is that he has something important to say.

I’ll share his words below, but first, a word from the Sdei Chemed (Maareches Beis Haknesses, 21). Citing the Magen Avraham and the Chasam Sofer, Rav Chaim Chizkiya Medini concludes that any behavior considered disrespectful in a given society’s non-Jewish houses of worship becomes, as a result, forbidden in that society’s Jewish shuls. Even actions that are otherwise permitted by halachah in a shul, if they are regarded as disrespectful in local places of non-Jewish worship, are forbidden in a Jewish makom tefillah.

That’s something well worth pondering these days. There may be churches where congregants “warm up” in the chapel as services get underway by loudly discussing politics, business or the stock market, or just joking around.

My guess, though, is that there aren’t many.

Klal Yisrael is blessed, baruch Hashem, with shuls where proper decorum is the norm, that mispallelim enter with reverence and use only for davening and learning Torah. But, as we all know, there are many, too, that seem less of a mikdash me’at than a shuk gadol.

I understand, I really do, that shuls are seen as “home” by many Jews. As they should be, at least to an extent. After all, we spend good parts of our lives within their walls. We feel comfortable there.

But even a shul that was built – as most shuls are today – on the condition that eating and drinking will take place in it nevertheless remains a shul, and the condition made does not permit any less respectful behavior.

And when davening itself is taking place, the ante is upped considerably. Then it is not just the place that is holy but the time. Anyone who has learned the halachos of tefillah knows the parts of davening when mundane conversation is forbidden – and they include chazaras hashatz. Those halachos are in the same Shulchan Aruch as the laws of taaruvos and Shabbos. (And anyone possessed of common sense knows that even at times when talking may be permitted, if it disturbs others’ prayers, it is a violation of simple human courtesy.)

I write here about decorum, not quiet. There is nothing wrong, and indeed everything right, about saying Pesukei d’Zimrah and Krias Shma aloud. That’s what some of our non-Jewish neighbors refer to as “making a joyful noise” to Hashem, their translation of “hari’u l laHashem kol haaretz,” the first passuk of Tehillim 100.

But if the noise isn’t joyful, and not laHashem, then it’s just noise.

Davening demands dignity. A stranger to many a shul would surely be impressed by what he sees. But there are, reportedly, shuls where the stranger would be puzzled, where he would wonder at how worshippers could purposefully leave their phones on during services, allowing the devices to interrupt the proceedings with ringing and beeping and singing. Where those gathered for prayer actually answer their phones, or tap out text messages and e-mails.

Which brings us to Pedro. He has clearly not rehearsed his words, only observed something that bothers him. He smiles sheepishly at times but is determined to share his message, presumably with someone to whom he complained, and who then asked him to speak on camera. I quote the custodian verbatim:

“Me no understand. When they come to the synagogue – fifteen minutes, twenty minutes, thirty minutes, one hour, whatever – it’s for the G-d. Not for the phone… Oh, somebody call? ‘Oh, wait G-d! Somebody call me…’

For us, too, it should be no good.