The New RCA Resolution About Women Rabbis – What It is, and What It Is Not 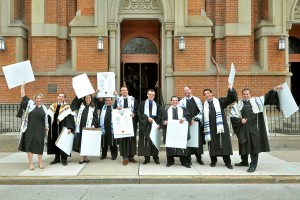 JOFA (Jewish Orthodox Feminist Alliance) continues to be disappointed by the RCA’s insistence that only men may assume positions of “rabbinic status,” which as far as we can tell, amounts to nothing more than an obsession with titles… We are disappointed that America’s largest association of Orthodox rabbis spends its time developing redundant statements (see 2010 Statement, 2013 Statement) absent of halakhic grounding…

The above JOFA advocacy statement and a petition in support of the ordination of women as rabbis, as pushback to the new Rabbinical Council of America resolution concerning women rabbis, have been posted on the Facebook pages of Yeshivat Chovevei Torah and numerous Open Orthodox constituents. Whereas I normally do not react to JOFA statements, in this case, JOFA’s statement evinces great misunderstanding and provides the opportunity to clarify and educate.

Although I am a member of the RCA’s Executive Committee and I voted in favor of the above resolution (which was voted upon by the entire RCA membership), I am not an RCA officer, nor an RCA representative, nor do I represent the drafters of the RCA resolution. I speak for myself only, yet as someone who has intimate familiarity with many of the issues and the background.

Contrary to the belief of JOFA and the Open Orthodox rabbinate, the RCA’s position that women may not be ordained as clergy is based on the clear rulings and direct counsel of Rabbi Aharon Lichtenstein, Rabbi Hershel Schachter, Rabbi Gedalia Dov Schwartz and Rabbi Mordechai Willig, all of whom presented their positions against the ordination of women to the RCA in 2010 and appealed to the RCA to vote in favor of a 2010 resolution to that effect. These preeminent halachic authorities presented a variety of reasons and analysis thereof for their decision, but the decision was uniform. (Please also see this incisive article.)

The RCA resolution of 2010 was, unfortunately, circumvented by some rabbis. Other rabbis, who are in the field and have been defending the position of the RCA poskim in the face of local Open Orthodox rabbinic and lay challenges, felt that something more specific was needed. Additionally, female clergy have been increasingly employed by Orthodox-identified congregations and schools over the past several years. It was against this backdrop and in response to these important developments that the 2015 RCA resolution on the matter was drafted, submitted for passage and adopted.

The new RCA resolution not only affirms the position of the RCA’s poskim against the ordination of women, but it stipulates:

Therefore, the Rabbinical Council of America

The drafters of the resolution sought to restrict the focus to the ordination of women, and not to address the propriety of Yoatzot Halacha and other newly-created women’s titles and the programs which grant those titles. Unfortunately, despite this intent, many have construed the wording of the resolution as actually endorsing the Yoatzot programs and so forth. Although this seems to be a legitimate reading of the resolution, this was not at all its intent. The drafters purposefully did not want to convey an opinion about the propriety of Yoatzot programs and the like, as the RCA has no official position on the matter, and many RCA members, this writer included, are not in favor of such programs. This is a critical point of clarification that must be made and publicized.

Some Open Orthodox rabbis have alleged that the RCA is placing people outside of Orthodoxy, discriminating against those who do not agree with the RCA position, and changing the rules. Nothing could be further from the truth. The RCA resolution is based on the 2010 pronouncements of the RCA’s poskim, whose articulation of the issues merely continued the rabbinic tradition of millennia and did not change anything. On the contrary, this problem was not created by the RCA, and those who broke rank with traditional Orthodoxy and introduced the problem and precipitated the present schism should think hard about their actions and trajectory.

I present here a snippet from a previous article on the ordination of women rabbis:

Within the week, three Orthodox-identified rabbinical ordination programs for women granted semicha (ordination) to their graduating classes. (Please see here and here.) While the mainstream organs of Orthodoxy do not recognize or approve of the ordination of women (here are RCA statements about the matter), the reasons for not accepting the legitimacy of semicha for women remain a mystery to some.

Various articles have been published about the topic (please see here for R. Hershel Schachter’s article); I would like to take one approach and provide some elaboration.

Halachic analysis of contemporary rabbinical ordination of women was first put forth by R. Saul Lieberman (please see here for R. Gil Student’s important presentation thereof), who in 1979 expressed his opposition to such on the part of Jewish Theological Seminary.

Although R. Lieberman’s tenure at JTS was the subject of controversy and was certainly not viewed favorably by Orthodox leadership, R. Lieberman was Orthodox and was very well-versed in our topic; his ruling on it is thus quite pivotal and precedential. R. Lieberman’s position was discussed in my initial article on rabbinical ordination for women, but that article focused more on the definition of Mesorah (Torah tradition). Let us turn here to the actual issue of semicha for women.

Lieberman demonstrates that even though modern-day semicha is not the original semicha that was conferred by Moshe upon Yehoshua and that continued to be conferred upon subsequent scholars until one-and-a-half a millennia ago, modern-day semicha is most certainly a carryover and model of the original semicha. The original semicha empowered one to serve as dayan, rabbinic judge, and that is exactly what contemporary semicha represents, as evidenced in the earliest of rabbinic literature that discusses the purpose and function of contemporary semicha. Since women cannot serve as rabbinic judges (Shulchan Aruch Choshen Mishpat 7:4, with the exception of cases of binding arbitration, in which the status of dayan is forgone [Sanhedrin 24, Rambam Hil. Sanhederin 7:2] – and modern-day semicha is decidedly not modeled on this), the rabbinical ordination of women is not valid and is distortive of the very essence of semicha. To grant semicha to women makes no sense, and to do so would “make ourselves objects of derision and jest”, proclaimed R. Lieberman.

The end of the matter is that it is clear from the sources that being called by the title “rav” (“Rabbi he shall be called”) reflects on the fitness to issue legal decisions and to judge, and we should not empty the title “rav” of its meaning from the way it has been understood by the Jewish people throughout the generations. Since a woman is not fit to judge, and she cannot become qualified for this…

Those who promote the ordination of women as rabbis either erroneously assert that modern-day semicha is a novel contrivance that has no controlling precedent, or they turn to the example of Devorah the Prophetess, who judged the Jewish People. (Shoftim 4:4)  However, Devorah did not have semicha and did not sit on the Sanhedrin. Rishonim (medieval halachic authorities) explain that she either was a leader and teacher, that she practiced binding arbitration, that she provided instruction for dayanim, or the like. To use Devorah – someone who did not have semicha and did not qualify for it – as the precedent for women rabbis is quite a stretch.