Where “Objective” is Defective 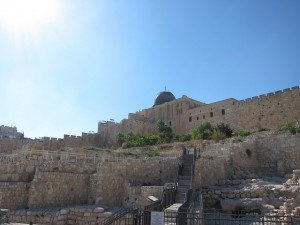 I’m not among those who grow apoplectic at the New York Times’ reportage from Israel. There are, to be sure, occasions when, in misguided attempts to achieve what passes these days for “evenhandedness,” the Old Gray Lady misses the mark. But I have found most (I wrote “most”! – please hold off with the angry letters!) of the dispatches from Eretz Yisrael to be informative and objective.

What isn’t either of those things, though, is how the paper has repeatedly chosen to characterize the Har HaBayis. In fact, “misleading” and “deceptive” are the most descriptive words to come to mind.

After a recent clash between Israeli police and Palestinians at the site, for instance, a September 16 New York Times report referred to the holy place as the site where the Jewish temples were “believed to have once stood.” Another story, three days earlier, described it as a site “revered by Jews” but “one of the three holiest sites in Islam.” Why not “revered by Jews and Muslims,” or “Islam’s third holiest site and Judaism’s holiest one”? Something is rotten in the state of New York.

Similarly, two years ago, a Times video referred to the Har HaBayis as the place “that Jews call the Temple Mount…” and that “Jews widely believe was the site of the Temples.”

Call the Temple Mount? That’s what it is. Believe? Yes, like we believe the sun is hot.

No historian, at least in a state of sobriety, entertains the slightest doubt that the Bayis Sheini stood on the mount for centuries, having been built there nearly 1500 years before Islam’s founder’s grandmother was born. Both Jewish and, l’havdil, Roman sources recount that korbanos were offered on the mizbei’ach there. (The historicity of the Bayis Rishon is part of our mesorah, but the lack of contemporary non-Jewish writings from the time deprives historians the documentary “proof” they demand.)

That the Har HaBayis was conquered by Christian, and then Muslim, forces, and that churches and mosques were built upon the site, is undeniable. Equally undeniable, though, are the site’s true Jewish origins – brightly reflected in the life and prayers of Jews over the course of known history.

Every observant Jew recalls the Beis Hamikdash every single day of the year, in each of his or her tefillos – recited, of course, facing in the direction of what we “widely believe was the site of the Temples.”

Then there are our holidays, like the one just past, where our Mussaf tefillos include a lengthy bemoaning of those Temples’ destructions.

The words “Yerushalayim” and its synonym “Tzion,” the city whose holiness derives from the holiness of the Makom Hamikdash, pass our lips at least ten times every morning. Before breakfast.

There is “shabchi Yerushalayim” in Pesukei d’Zimrah, “ohr chodosh al Tzion to’ir” in birkas Krias Shma, Boneh Yerushalayim in Shemoneh Esrei, another reference in Tachanun, and others throughout Shacharis. And let’s not forget Korbanos.

And then, after breakfast, well, if one had a bowl of cereal, his Al Hamichyah would mention Yerushalayim two more times. And if bread was consumed, one of the brachos of Birkas Hamazon, of course, expresses our hope that Hashem will be “boneh b’rachamov Yerushalayim.”

What distorts the vision of the “paper of record” is, of course, a deep commitment to fairness and objectivity. There is, after all, a “Muslim narrative,” too, a claim to the Makom Hamikdash by another religion, indeed one that, at least in numbers of adherents, dwarfs the Jewish one.

But fairness, of course, doesn’t mean considering every claim to be the equal of every other one. When the New York Times refers to the events of September 11, 2001, it describes them as a concerted attack by Al Qaeda on the United States, not as “a series of plane crashes believed by Americans to have been Islamist attacks but considered by many in the Arab world to have been the work of the American government or a Jewish plot.” At least it hasn’t done so yet.

It’s an unfortunate reminder of our galus that the Bais Hamikdash isn’t standing where it once did. But we must accept that sad fact. It is wrong to seek (other than through our tefillos) to change that current reality, halachically wrong to walk onto the Har HaBayis, and doubly wrong to endanger Jews by offending those who occupy the site.

But what’s also wrong (attention: New York Times) is to pretend that its history isn’t established and clear.