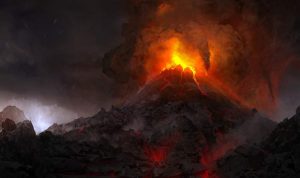 The centerpiece, if such a word can be used in the context of a parshah, of Vo’eschanan is generally assumed to be the Aseres Hadibros, the Decalogue.

But I think that the even more fundamental element of the parshah is the recounting of history at 4:32-36, beginning, “For ask now about the early days that preceded you…” In particular: “Has any people heard a Divine voice speaking out of a fire, as you have, and survived?” and “From the heavens [Hashem] let you hear the Divine voice to torment you…”

Every religion on earth touts a miracle or miracles as its basis. Judaism is different, something the Rambam explains in Mishneh Torah (Hilchos Yesodei HaTorah 8:1-2).

While there were many miracles in Egypt and the desert, he notes, only the revelation at Har Sinai truly cemented, without reservation, in the minds and hearts of the Jews, the fact that Hashem was real and had been the author of the miracles they had experienced.  Because, the Ramban observes, any “miracle” could in fact be trickery or sorcery, engineered by a talented magician or sorcerer.

So what made Har Sinai qualitatively different from the splitting of the sea or the mon? The fact, it would seem, that our ancestors directly interacted with the Divine there. The Sinaic experience wasn’t mediated by the senses. The Jews “saw” the thunder; the normal senses were bypassed (See Mekhilta d’Rabbi Yishmael 20:15:1).

It was a meeting, so to speak, of the minds – or, better, minds and the Mind.

Which is what the phrase “to torment you” above refers to. The experience – “Face to face Hashem spoke to you” (5:4) – was so wrenching to mere mortal men and women that the nation, after the first two dibros, begged Moshe to continue receiving the revelation, with the people continuing as bystanders, witnesses, but not direct recipients (See 5:22-24). The need for the initial “torment” or “torture” was to establish, which no mere miracle could, Hashem as Hashem.

And that establishment of relationship is absolutely singular. No similar claim to a mass Divine-to-mortals revelation is, or can be, claimed by any other people or faith.

A piece I wrote for Forward, about ending violence at the Kotel,  appeared before Tisha B’Av and can be read here.