Tazria – The Little Man Who Wasn’t There 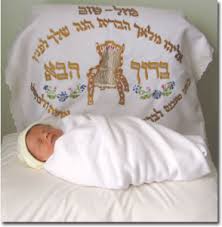 “On the eighth day yimol b’sar arlaso – the flesh of his foreskin shall be circumcised” (Vayikra, 12:3).

Rather than directly command circumcision, the Torah here employs the future passive tense – “it shall be done” – instead of just “do it.” That might hint to the fact that, while the baby’s father is the one responsible for his son’s bris, in the absence of the father, other paternal relatives are then obligated. And, in the absence of such relatives, the bris becomes a communal responsibility (Kiddushin 29a).

But the Talmud Yerushalmi (Kiddushin 1:7:2) seems to understand the word yimol to mean not “shall be circumcised” but rather “he should circumcise,” with the subject being not the foreskin but the father. (The Talmud Bavli derives the fact that the father is the initial responsible party from the example of the commandment that was given Avraham [Kiddushin 29a].)

But there is no previous mention of the father as the pasuk’s subject. The Yerushlami, in other words, perceives in the text a person who isn’t there.

There’s a similar “missing subject,” interestingly, in the brachah that the baby’s father makes at a bris: “Blessed are you Hashem… Who sanctified us with His mitzvos and commanded us to enter him into the covenant of our forefather Avraham.”

Who is the “him”?  Presumably the baby. But there has been no previous mention of the baby during the ceremony.

What gives? Why would there be missing subjects in the Torah’s text about milah and the same mitzvah’s brachah? Might there be some connection between the two “missing men”?

I pose the question but have no answer.

My most recent Ami column, “Comical Comparison,” is here.

And a piece I recently wrote for Haaretz is here.