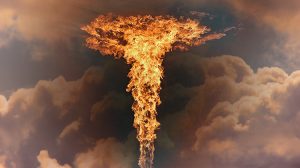 Fire descending from heaven was something our ancestors in the desert experienced nightly for decades, as the daytime pillar of cloud was replaced by one of flame. It had surely become an expected, regular event.

And so the question has been asked: Why, in our parshah, at the dedication of the Mishkan, when fire descended “from before Hashem” and consumed the korban olah on the mizbe’ach, did the nation react so passionately, by “rejoicing and falling on their faces” (Vayikra 9:24)? Fire from heaven? Was that not a daily occurrence?

One approach might be that this fire descent took place during daytime – think of how we might react were the sun to suddenly appear for a few moments at midnight. Or, as Emerson wrote: “If the stars should appear one night in a thousand years, how would men believe and adore…”

But the Shem MiShmuel points to something else here. The pillar of flame, like its daytime counterpart, the cloud, he notes, essentially served a destructive purpose, preceding the nation as it traveled and consuming any obstacles or threatening creatures in the Jews’ path. Here, though, the divine-directed fire’s consuming was of a korban, from the root meaning “closeness,” and thus was, beyond all else, a demonstration of Hashem’s love for Klal Yisrael. That is what so struck the people and brought forth their rejoicing.

Fire, indeed, is the obvious symbol of all that can be either powerfully destructive or constructive. In its natural, unbridled state, it is the former. Properly harnessed and directed, though, it can be the latter. And fire, in many midrashim, symbolizes the yetzer hara, the inclination to do what is wrong (see Kiddushin 81a).

Left unfettered, it leads to doom. But it is also what allows the world to work.

Rav Shmuel bar Nachman said that “Were it not for yetzer hora, no man would build a house, take a wife and beget children” (Bereishis Rabbah 9:7). When the chachamim tried to prevent the yetzer hora from operating, disaster resulted (Yoma 69b).

But, “pulled to the beis medrash” (see Kiddushin 30b), when its power is harnessed for good – it is invaluable.

My most recent Ami column, “Diversity in the Court!”, can be read here.

And a piece I wrote for Religion News Service that appeared just before Purim appears here.