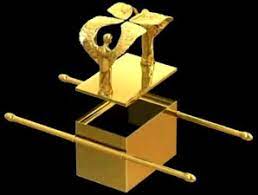 The pair of verbs describing Moshe’s placing of the luchos, the second set of tablets he received at Sinai, in the aron, or ark, to be placed in the Mishkan, is unusual: Vayikach. Vayiten, “he took and he placed” (Shemos 40: 20).

Those words likely reflect the fact that the luchos were being transferred from the temporary aron that they occupied into the one Betzalel made (See Rashi, Devarim, 10:1). Moshe “took” them from that earlier repository and “placed” them in the new one.

The aron itself was open at its top, and placed upon it as a cover was the gold kapores: “And you shall make an ark cover of pure gold, two and a half cubits its length and a cubit and a half its width” (Shemos, 25:17).

It is presumed that the aron hakodesh in a shul, which houses Torah scrolls, is intended to reflect the aron in the Mishkan.

I recall as a child hearing some older people in shul refer to the paroches, or aron hakodesh curtain, as a kapores. I assumed that they had inadvertently mixed up the words paroches and kapores. But several years ago I saw, gracing a yeshiva’s aron hakodesh, just above the paroches, the pasuk about the kapores.

But that leaves me with a question: Why, indeed, do we orient our aronos hakodesh as we do, resembling a wardrobe, not a trunk – like the original one? Why do we take the sifrei Torah out of the aron instead of lifting them up from it?

I have no answer.

To read my most recent Ami column, “The Collision Course,” please click here.