Parshas Vayeilech — Prepared to Not Progress 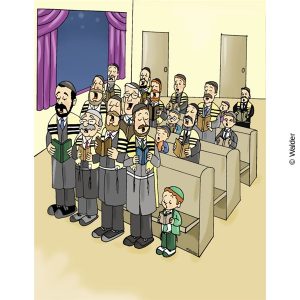 Children brought to shul need to be controlled by their parents, of course. They mustn’t be permitted to disturb those gathered there to daven. But, at least from an age when they can be effectively controlled, they should be brought.

Ah, but won’t controlling them perforce prevent their parents from focusing fully on their tefillos?

Too bad. That’s part of a parent’s job, being hindered.

The mitzvah of Hakhel, described in parshas Vayeilech, entails, in the time of the Beis HaMidkash, the gathering, during the first year of the Shmitta cycle, on the first day of chol hamoed Sukkos, of all the nation’s “men, women and children” (Devarim 31:12).

The men, Rashi quotes Massechta Chagiga (3a), in order to study (from the portions of the Torah the king reads); the women, to absorb the words; and the children… “to give reward to those who brought them.”

Seems rather circular. Bring them because it’s a mitzvah to bring them?

It is said in the name of R’ Nosson Adler (the first rebbe of the Chasam Sofer), and also of the Baal Shem Tov, that the meaning of the Gemara is that the parents’ reward is for bringing their children even though controlling them makes their fathers’ and mothers’ learning and listening difficult.

Chinuch, training children, in other words, is important enough to require parents’ discomfiture and loss of personal, even spiritual, opportunity.

The Amora R’ Yochanan (Chagigah 15b) said, based on a pasuk in Malachi, that only if a rebbe is similar to an angel of Hashem should one “seek Torah from his mouth.”

R’ Pinchas HaLevi Horowitz, the “Hafla’ah” (and, interestingly, another rebbe of the Chasam Sofer), suggests that, since angels are described (Zecharia 3:7) as “omdim,” “standers,” implying changelessness, R’ Yochanan means to say that a rebbe has to be prepared to not progress personally, if that is the toll of his dedication to his students.

And parents, of course, are the ultimate rabbaim, the most influential molders of their children. They must be prepared to be hindered in their personal progress for the sake of their young.