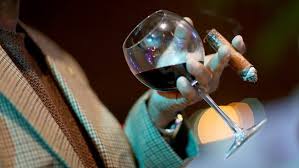 One would have been forgiven for assuming it an elaborate Purim joke.  In fact, assuming otherwise would have strained credulity.

But credible, unfortunately, it is. “It” — a new glossy magazine I prefer not to name, aimed, its marketing team says, at Jewish “men age 25-65 from the right and the left who are Conservadox, Modern Orthodox or Yeshivish; and live in Flatbush, Lakewood, the Five Towns and Bergen County” — is apparently all too real, a crazy cartoon come to life.

The new periodical is for you. If, that is, you “are enthralled by men’s luxury and higher end products.”  If so, the mag “has it all covered for you,” focusing on “all fine goods in the consumption industries for Jewish men,” from “an old fashion [sic] to bourbon or wine.” And, of course, cigars, grilling, cars, cologne, man caves and fancy watches.

And there will be photos! Of “first class dining, men’s hobbies & lifestyle,” depictions that will “captivate our readers [sic] attention for their elegant experience,” whatever that is supposed to mean.

An article in a Jewish newspaper about the new offering helpfully informs readers that “Sure, you have your chavrusas, seforim and shiurim,” but you need help to “make the best use of your precious free time, with premium content by experts in their fields about the rewards that come after a hard week of work and learning.”

Maybe it is a Purim shtick.

No, I checked again. It’s not.

Something is rotten in the state of Orthodox-ish. The “ish” is indicated because hedonism is as mixable with authentic Orthodoxy as cool spring water is with grease dripping from a succulent steak on a high-end barbeque grill.

Interestingly, in  response to the ongoing Covid crisis (and thankfully unaware of the magazine’s debut), the members of Moetzes Gedolei HaTorah recently issued a call to the Jewish community to recognize that the crisis’s challenges and tragedies should be regarded as “an appeal from Heaven to correct our ways,” in particular with regard to “a fundamental and broad point.”

The point? That “Klal Yisroel is a ‘nation of princes and a holy people’.”  And that Jews must, as a result, “distance themselves from the pursuit of excess.”

“There are among us,” the call to sensitivity continues, “those who, notwithstanding their care with mitzvos, pursue fine foods and expensive vacations; they boast of their clothing and furniture,” people who are not exclusively focused, as Jews should be, on living “a modest life centered around Torah, service to Hashem, and kindness to others; a life purposed on being close to Hashem.” Who ignore the “spiritual danger” of “a life of materialism.”

There are, to be sure, occasions when somewhat “fancy fare” may be excusable, for the enhancement of simchos and such. There are even times when we might need to pamper ourselves in order to revive our emotional energies, when treating ourselves to a special treat helps us to better serve Hashem bisimcha. But elevating luxury to an ideal, putting hedonism on a pedestal? Ugh.

The Moetzes members’ call will probably strike the new magazine’s machers as wildly preposterous, even insane. Just like the glassy-eyed fellow with the tin foil hat walking down the street mumbling to himself about Martians thinks everybody else is deranged.

As it happens, though, the Moetzes statement should stimulate introspection in the rest of us, too, we who don’t salivate at the prospect of a good bourbon or fine cigar. We may not be “enthralled by… luxury and higher-end products,” but can we say we haven’t drifted a bit from modesty toward excess ourselves?

Things that once were extravagant luxuries have bizarrely morphed into “necessities.” Larger and more elaborate homes than we really need testify to such change (not to mention that they draw resentment from others). The sort of cars we drive, the type of vacations we take, the foods and drinks we consume, the size and elaborateness of the simchas we host (something the current health crisis has in fact taught us are unrelated to true simchah) — all point to an imbalance in priorities.

Even, at least in some places, rewards given to talmidim and talmidos by rabbaim and moros have become extravagant; stars on charts and small tchotchkes no longer cut the mustard (even our mustard doesn’t anymore, having yielded to gourmet condiments).

Some candymen in shul have reportedly also felt the need to “upgrade” their offerings, lest the youngsters find more rewarding places for worship (or whatever).

Rewarding deserving children is undeniably important, yes, but so is teaching them about limits.

It’s a truth universally acknowledged in principle but increasingly ignored in practice: Even in times of plenty and even for the financially fortunate, there is dignity in modesty.