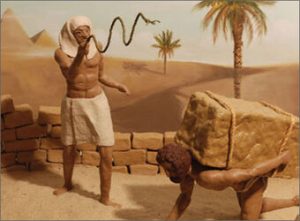 As the Jewish population in ancient Egypt swelled, the Torah tells us that vayakutzu — The Egyptians “were disgusted” (Shemos 1:12).  Rashi explains that “they were disgusted with their [own] lives.”

A superficial reading of vayakutzu would lead to a simpler understanding, that the Egyptians, out of fear (as pesukim 8 and 9 describe), found the Jews, not themselves, disgusting. What is the significance of Rashi’s comment?

The Mei Marom (Rabbi Yaakov Moshe Charlop, 1882-1951) posits that the pasuk is teaching a psychological truth: It is impossible to embitter the life of another unless one is embittered with himself. Anyone who appreciates and cherishes his own life will perforce be concerned about the lives of others.

And so, Rabbi Charlop concludes, if one sees someone oppressing another, one can surmise that the oppressor’s cruelty is fundamentally sourced in self-loathing.