The Parachutist and the Rabbi 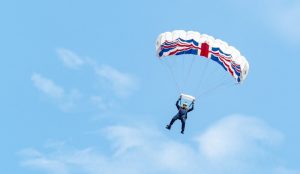 At age 29, Rabbi Boruch Boudilovsky, former IDF combat paratrooper, parachuted into London as the associate rabbi for the Borehamwood Synagogue. Along with him came his Rebbetzin, Esther (nee Poupko) and several small children. It was Rabbi Jonathan Sacks, z”l, who made it possible for the Boudilovsky family to have a soft landing.

For the shloshim of Rabbi Sacks, I would like to cite the experience of Rabbi Boruch, reflecting the nuts-and-bolts aspects of Rabbi Sacks’ work that have been little discussed. This complements Rabbi Adlerstein’s moving tribute and his brilliant closely-argued Defending Rabbi Sacks where the discussion is on a theological-halachic plane.

Rabbi Boruch Boudilovsky, described his first meeting with Rabbi Sacks, as he eased into his first pulpit in England:

I received a phone call from the Office of the Chief Rabbi. He would regularly meet with the new rabbis. I showed up and found myself alone in the room with the Chief Rabbi. After some standard introductory questions, he asked who inspired me. When I mentioned Rav Yosef Dov Soloveitchik,z”l, the conversation turned to the latter’s seminal essay, Ish HaHalacha, Halachic Man. Thereupon Rabbi Sacks explained that Rabbi Soloveitchik had left something out. I was startled and puzzled by this seeming critique. Then Rabbi Sacks continued and explained that the Ish HaAggadah was also important. Judaism is not only halachic; it also has an aggadic facet. There was a need, posited Rabbi Sacks, for an emphasis on Aggadic Man next to Halachic Man. And he went about to fulfill that need, to explain Judaism’s relevance in the language of the age in which we were living.

Our conversation touched on issues of emunah. At one point, he not only suggested a book on faith by a contemporary observant thinker, but also went to the next room and asked his secretary to order it under the heading of Rabbinic Development. A few days later I received it, with a dedication from him.

R. Boruch had rounded many bases before that first meeting. Born to a father who was a baal teshuva from Russia, R. Boruch had grown up in Glasgow and New York. After graduating from yeshiva in Denver, he enrolled in a Hesder program, completing his IDF service as a paratrooper with a number of jumps to his credit. He then went to talmudic boot camp in Jerusalem’s Mir Yeshiva for several years. In 2010 he was recruited in Israel by scouts from the United Synagogue in the UK and was drafted to serve as associate rabbi in Borehamwood and Elstree, the largest kehillah in England. In 2016 the Boudilovsky family returned to Israel where R. Boruch took the pulpit of Young Israel of North Netanya.

He organized and led Lunch & Learn sessions with the young rabbis. I would not miss those for anything. Before the holidays, he would meet with rabbis for a chabura-style shiur. In preparation for the Yamim Noraim, all the rabbis would have a two-day conference. In addition to more learning, he would brief us on public and governmental issues that would affect us. He would invite guest scholars to teach. Throughout the year, he organized United Synagogue study sessions and residential days, and would come to speak to us. I still have notes from those sessions. There would be lighter kumzitz-style sessions, too. He would talk to us about how Rav Soloveitchik and the Lubavitcher Rebbe had impacted him.

At one of those sessions, Rabbi Sacks expounded on the responsibility of a rabbi in the particular milieu of British United Synagogue. “The role of the rabbi,” elaborated Rabbi Sacks, “is similar to that of a good chazzan. A chazzan should inspire.” Rabbi Sacks did just that.

He not only inspired, but he made Judaism relevant and beautiful. This is reflected in his sermons, shiurim, lectures, and most of all in his exceptional writing. The weekly derashot are wonderful. However, his books and longer essays are masterpieces, especially the introductions to his siddur and machzorim. They are not just informative in content; they are graceful in style. I tried to use his written words as a way to reach out to people. There was a large segment of people who would come to shul only for the high holidays, and as guests for a bar mitzvah. Some of them did not know how to hold a siddur. I would say that those who were able to participate, by all means they should do so. However, there were many who could not follow the service, so I invited them to read the introduction to the siddur by our chief rabbi. This inspired people who were not able to follow the service; instead, they read Rabbi Sacks’ introduction to the siddur or machzor. This had an impact on them and sparked a desire to come closer to tradition.

The Borehamwood kehillah had 1500 families. A large percent would come to shul only a few times a year. Rabbi Sacks addressed this, ‘Those who are religiously observant have a rabbi. But for the Jews who don’t go to shul on Shabbos, I am their rabbi.’ That is how he saw his role.

How did he reach them? No one put out a red carpet for Rabbi Sacks during those first years as Chief Rabbi. He earned his wings through dint of hard work and imagination.

He wrote hundreds of articles in the British papers: the Guardian, the London Times, and others. He went on radio and television. He had a pre-Rosh Hashanah talk on the BBC. He reached out to Jews who did not have a shul rabbi. He put out CDs with music and commentary; videos with animation and text. Every Rosh Hashanah when the ‘Jews who had no rabbi except Rabbi Sacks’ came to synagogue, they found a thoughtful pamphlet on their seats, containing essays to enrich their yom tov. The Chief Rabbi’s Office printed up tens of thousands of these pamphlets. I still have some of these gems. Rabbi Sacks published over two dozen books. He innovated ways to get his message across. In this, he was second to none. I cannot think of any Orthodox rabbinical figure who had such influence on the non-Orthodox public in modern times. In the end of the day, he was also revered by the non-Jewish public and by leaders.

Rabbi Sacks had a doctorate from University of London and could hold his own in academe. R.Boruch illustrated this as he related an incident he witnessed. Among the several professorships Rabbi Sacks held was that of Professor of Law, Ethics, and the Bible at King’s College. A public event was held where Rabbi Sacks and a non-Jewish Bible scholar were invited to lecture.

I had done my M.A. degree there, so I went to see the discussion which was open to students and faculty. The hall was SRO; among them were some Jews with kippot, and many whose kippah was the dome of the sky. A highly regarded Bible scholar from Oxford was the first speaker. Afterwards, Rabbi Sacks lectured in an energetic and engaging manner. It was like day following night. The Q & A session was embarrassing because 80 or 90 percent of the questions were directed to Rabbi Sacks, among them a question from a non-Jewish student who asked how he could reconcile his faith with ‘scientific’ study of the Bible. You could hear the urgent anxiety in his voice. Rabbi Sacks answered. ‘My dear friend. You have to separate authorship and authority. Take for example the process by which English law is legislated. There is a procedure involving the House of Commons and the House of Lords, and when the law is ready it is brought to the Queen who signs it. Is she the author? No. But by her authority, it becomes law. So take for example the rabbinic discussions about the last verses of Deuteronomy after the death of Moses. Whether the authorship is Moses or Joshua, the authority is the Creator.’ The feeling of relief in the questioner was palpable.

I asked R. Boruch what was the most surprising aspect of Rabbi Sacks. R. Boruch had come to England from a very yeshivish milieu. He was surprised to find himself inspired by such a different approach. Rabbi Sacks’ oeuvre resonated with Jews in the diaspora, especially with centrist Orthodox Jews.

With respect to Israel, Rabbi Sacks saw that the center of action would gravitate there and thus he tried to bring his message to Israelis. His books were translated into Hebrew and Israelis began to respond. Ever willing to innovate, Rabbi Sacks participated during the lockdowns in several online sessions organized by Sivan Meir with Ishai Ribo, a popular religious singer. Rabbi Sacks’ writings are somewhat less relevant among the national religious in Israel whose concerns are differently focused. However, there has been surprising interest among the modern haredim.

R. Boruch was very emphatic about the legacy of Rabbi Sacks:

I want to tell you one last thing. Many of Rabbi Sacks’ endeavors are very special but not indispensable. There is no monopoly on scholarship; there will be new scholars, creative rabbis, and gifted communicators who will emerge, please G-d. However, there is one aspect lost forever: Rabbi Sacks was sui generis with respect to the stature he brought to Yiddishkeit. The Jewish nation became impoverished on Shabbos Vayera with his demise.

We pray for the prestige of our nation in Avinu Malkeinu when we say:Hareim keren Yisrael amekha. Rabbi Sacks translates this in his siddur: “Our Father, our King, raise the honor of Your people Israel.” Similarly, we say on Rosh Hashanah: U-v-khen tein kavod Hashem l-amekha; “And so, too, HASHEM, grant honor to Your people.” When our nation is held in high regard that is a massive Kiddush Hashem.

That high regard does not come from having the greatest Olympic athlete, or the most famous actress, or the most skilled intelligence network. The one who revealed the beauty of our Torah on an unprecedented level was Rabbi Jonathan Sacks, zichrono livracha.