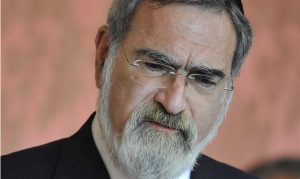 One could have spent all day Sunday reading the tributes to Rabbi Lord Jonathan Sacks and still not finished them. Without examining their content, the sheer volume of laudatory material assembled in the hours after his passing – including from the Arab world and from Prince Charles – testifies to his greatness.

My practice (and I believe it is that of the other Cross-Currents writers) is to weigh in only with some insight or angle that others have not contributed.[1] Is there anything left to say? Yes, I knew him, was privileged to spend time with him, and even interviewed him for a short biography of him. But I would not say anything different about those interactions than everyone else who spoke of his wisdom, his eloquence, his vision, and the great kiddush Hashem that he created in front of audiences of all backgrounds and faiths.

What more, then, remains to be said? Two points, I believe, that I have not seen stressed by others, although I could easily have missed them: