You May Be a Frum Boomer… 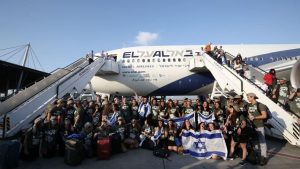 If you remember Tisha B’Av afternoon as the time that the standard fare was a shiur in the gemara of Kamtza and Bar Kamtza. No more. Today, it is our national movie day.

I’m not complaining. Quite the contrary. I’m marveling at the rapid transformation of the way we take in the day’s message. It has strengthened the message of our national day of mourning. The video presentations touch us deeply, and bring home our longing for the presence of the Shechinah, and the impact of losing the Temple. They remind us of the horrors of two thousand years of exile, and those of the Holocaust in particular.

In the last hours, I’ve been processing all kinds of accolades, from different parts of the Orthodox world. All of them spoke in superlatives about how uplifting this year’s fare was. No one who messaged me expressed anything but gratitude for Yoel Gold’s inspiring stories; Benzion Klatzko’s chilling animation of the destruction of the Temple; the mega-events of the Chofetz Chaim Heritage Foundation and Project Inspire; Rabbi Zev Leff’s wonderful accompaniment of kinos for well over three hours, all themed around Covid-19. (I’m not leaving out the others by design. I suspect they were equally wonderful. But there was such a rich assortment available, even a large group of friends and relatives didn’t get around to all of them.)

It occurred to me that there is a secondary message in all of this worthwhile mining, especially since it is upbeat and optimistic. Bringing some cheer to people is a mitzvah. If it isn’t, then it should be.[1] Forgive me, then, for trying, even if the attempt might sound artificial or saccharine to some.

Maharal writes that the essence of galus/exile is pirud/separation and dispersion. Furthermore, the fates of the Jewish people and Torah itself are linked and intertwined. What happens to one, happens to the other. When Jews come together, he says, they escape galus no matter where Waze reports they are located.

And come together they should. Certainly in the physical sense of a return to the Land. Our absence from the Land is entirely unnatural. The natural state of a people is to be united with its place. When that ceases to happen, they stop functioning as a people. The survival of the Jewish people is guaranteed by G-d. Thus, they must be forever pulled towards a return to the one Land promised to them as their place. Galus, then, should disappear over the course of time, pretty much on its own.

It doesn’t, because what caused us to lose our possession of the Land still has not been repaired. So HKBH keeps galus going – artificially, we might say. (We are used to hearing the opinion of the Yaavetz that the single greatest miracle of Jewish history is our very survival during the exile, despite everything that they could and did throw at us.[2] Interestingly, according to Maharal it is not only our survival that is miraculous, but the continuation of galus itself that requires an ongoing miracle!)

Let’s put this together. We’re drawn magnetically to the Land. We’re not ready for the full return yet, so Hashem props up the mechanisms maintaining the existence of a Diaspora. Torah is subject to the same treatment.

Now, something happened in 1948 which many of us hope and pray was an irreversible step closer to our eventual full redemption. For the first time in close to two thousand years, Jewish authority over the Land resumed. Many Jews returned. Rav Menachem Kasher zt”l (among many other things, author Torah Shelemah) noted that there was an ingathering, so to speak of Torah itself around the same time. Although the gemara in Shabbos observes that in the pre-messianic days it would be hard to come by Mishnah berurah and halachah berurah/accurate teaching and accurate comprehension of that teaching in one locale, things had begun to turn around. Not that we were getting smarter, but that a new genre of Torah literature had appeared that created a virtual Torah location where much was united. Works were beginning to appear that gathered Torah opinions from all over the world and all ages, and processed them in topical manner. He saw this as yet another in a series of harbingers of an age of Redemption.

If that was true, then we are now witnessing Harbinger 2.0 The presentations we watched on Tisha B’Av brought together Torah talent from all over the world, and brought it straight to the homes of innumerable Jews all over the world. And just a few months ago, we saw small groups of world-class talmidei chachamim conquer physical separation/pirud by meeting via Zoom to consider some of the weightiest halachic issues relating to the treatment of Covid-19.

I hope this reflects a real silver lining to the corona cloud. The dispersion of Torah has diminished in the last year. May Hashem continue the process, and bring it and the remnant of the Jewish people back home quickly.