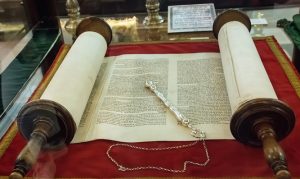 An Open Letter to the Torah Community

The unhealthy confusion of Torah values with politics brings disrepute to Torah and harm to Torah Jews.

No party platform can substitute for our mesorah.

As a community, we ought to clearly and proudly stand up for the Torah’s stance on societal issues, embracing a worldview that identifies with no party or political orientation. Our interests may dovetail with a particular party or politician in one or another situation, but our values must remain those of Sinai, not Washington.

Moral degradation infects a broad swath of the American political spectrum. In the camps of both liberals and conservatives, many political players are on a hyper-partisan quest for victory at all costs.

Good character and benevolent governance are devalued, contrition is seen as weakness and humility is confused with humiliation. Many politicians and media figures revel in dividing rather than uniting the citizens of our country. Others legitimize conspiracy theories. None of this is good for America, and certainly not for us Jews.

Shameless dissembling and personal indecency acted out in public before the entire country are, in the end, no less morally corrosive than the embrace of abortion-on-demand or the normalization of same-gender relationships. The integrity and impact of what we convey to our children and students about kedusha, tzni’us, emes, kavod habriyos and middos tovos are rendered hollow when contradicted by our admiration for, or even absence of revulsion at, politicians and media figures whose words and deeds stand opposed to what we Jews are called upon to embrace and exemplify.

These are not new problems. But the challenge seems to grow worse with time. If we don’t stop to seriously consider the negative impact of our community’s unhealthy relationship with the current political style, we risk further erosion of our ability to live lives dedicated to truly Jewish ideals.

We Jews are charged to be an example for all Americans.

Serious moral issues — truth, loyalty, contrition, vengeance, tolerance — are at the heart of much of today’s political discourse. Whether we realize it or not, many of us have come to be guided in such matters, at least in part, by politicians and media figures with whom we share neither values nor worldview.

We are a people charged with modeling and teaching ethical behavior and morality to others. It should be inconceivable for us to be, and be seen as, willing disciples of deeply flawed people who are now the de facto arbiters of what is morally acceptable. We should be ashamed when Torah leaders seem to have been replaced as our ethical guides by people of low character and alien values.

As Orthodox Jews, we live in a benevolent host society to which we have rightly given our loyalty. It is thus important that we not be regarded by the American public as turning a blind eye to the degradation of our moral climate in exchange for political support for parochial interests.

We must not allow ourselves to be co-opted by any party.

There are issues of great importance to us, like education funding, anti-discrimination laws and the affordability and safety of our neighborhoods, and we rightly advocate for our positions.

But we must reject the efforts of those who, for self-serving electoral gain, seek to turn Jews against any party or faction. Our practical focus should be on recruiting allies and building alliances, and we ought to shun partisan posturing that only alienates us from those who govern us.

We must ensure that Israel is not used as a political weapon.

We must oppose efforts to turn support for Israel from a broad consensus into a wedge issue. Although we may rightly be concerned about trends regarding Israel in some corners, indicting an entire party as anti-Israel is not only inaccurate but has the potential of becoming a self-fulfilling prophecy. Nor should any party’s strong support for Israel become a justification to blindly support its politicians in every other matter. We should advocate for Israel’s security and other needs without painting ourselves into a partisan corner.

We should vote as Jews, not partisans.

Nothing stated above is intended to address anyone’s voting choices. We write simply to caution against the reflexive identification of Orthodox communal interests with any particular party or political philosophy.

To that end, let us commit to being guided only by Torah perspectives and strive to insulate ourselves, our families, students and congregants from being influenced by the objectionable speech and conduct that have come to infect many parts of the political spectrum.

When we vote, let us do so as Torah Jews, with deliberation and seriousness, not as part of any partisan bandwagon. We are not inherently Democrats or Republicans, conservatives or liberals. We are Jews – in the voting booth no less than in our homes – who are committed, in the end, only to Torah.