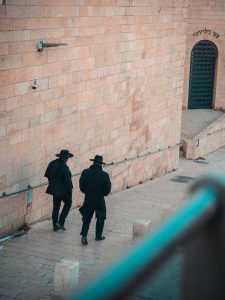 (Due to an overwhelming amount of work from my “day job”, leaving me so little free time, I am unable to read and address comments. Comments will therefore be turned off for this article. Also, for an hashkafic perspective on the COVID-10 pandemic, readers are directed to my Yated article of a few weeks ago.)

In these most trying times of suffering and crisis, one would expect people not to take advantage of the situation and turn it into an occasion for harsh condemnation of other well-meaning religious Jews. But alas this is precisely what Rabbi Irving “Yitz” Greenberg has done in his April 21 Jewish Week screed (there is no other word for it) “How Charedi Orthodox Theology Failed Its Followers“.

Greenberg starts with a tone of apparent compassion and understanding:

Our hearts go out to the members of the charedi Orthodox community in Israel and worldwide. Charedim are found in disproportionate numbers among the sick and the dead of the coronavirus epidemic. They are civilian casualties of the cruel, unrelenting war on all humanity being waged by Covid-19.

Numerous people have angrily blamed the charedim for the high losses in the community, arguing that initially their leaders rejected medical instructions. Various charedim have continued religious gatherings and Torah learning after health authorities called for social isolation. Those religious activities spread the disease much more in their midst…

Bad judgment does not justify rejection or hatred of innocent victims… The charedim are flesh of my flesh and bone of my bone and of the Jewish people. They deserve compassion and care at this time of their troubles.

Greenberg then proceeds to bluntly strike the major facets of Charedi belief, and then relentlessly goes after Charedi leadership, starkly departing from his call for sympathy and understanding:

At the same time, respect for the truth — and the commitment to prevent a recurrence — require that we critique the flawed charedi theology that leads to greater losses in these communities. First and foremost, they follow a biblical model in which God controls and does everything in history…

After proceeding to nastily refer to Charedi belief as “the folly of a theology that makes the Torah unlivable for a whole society”, Greenberg continues:

The second serious misinterpretation in charedi theology is to see sickness and natural catastrophes as divine punishment for sins rather than as natural phenomena. The Talmud disagrees: “The natural order operates objectively”; it does not differentiate between righteous and wicked people. (See Talmud Avodah Zara 54b.)…

Pre-modern, magical thinking is the sad outcome of the lack of a secular education… Unfortunately, the Gedolim — the Torah greats — who make these rulings are as uninformed as their followers.  The community has paid a terrible price for its leadership’s ignorance of science and secular knowledge…

In the last century, when they opposed Zionism, the charedi Gedolim, overall, were guided by the same defensive, insular theological thinking and lack of secular information. As a result, the Jewish community in pre-state Palestine became more secular, while the fervently religious in Europe were exposed to the catastrophic Nazi assault. Their leaders should have been turned out of office (as would happen in a democratic political system) — or they should have begun integrating modern thinking and Jewish religion.

A central target of Greenberg’s fire is a major, 92 year-old Charedi rabbinic leader who initially advised that yeshivos should remain open, upon being told that the government ordered yeshivos to be closed without really compelling justification. Once it the true nature of the issue – COVID-19’s acute threat to life – was explained to this rabbinic leader, he ordered that all yeshivos and shuls shut down without exception.

The fact that this rabbinic leader changed his position when provided with the real story was glaringly omitted by Greenberg, as were other dispositive facts.

Greenberg largely blames the large number of COVID-19 casualties in the Charedi population on the alleged Charedi refusal to close down their institutions and practice social distancing. He fails to note that the overwhelming majority of Charedi yeshivos and shuls did indeed close down upon being instructed to do so, and that nearly all Charedi communal events were canceled; the number of institutions which remained open for a brief time, as well as the number of public gatherings, were the exceptions, yet Greenberg portrays these as the norm, playing the blame game and scoring big against the Charedim. These exceptions were surely high-profile and of course should not have occurred, and even one exception was too many; yet the vast majority of Charedim were in full compliance, in contrast with Greenberg’s insinuations.

Please see this important, facts-on-the-ground article by Rabbi Menachem Bombach, this article about the immediate closure of Beth Medrash Govoha, the world’s largest yeshiva, as well as this video from the Novominsker Rebbe, of blessed memory, about the importance of social distancing; the video was issued by Agudath Israel of America, which is the largest Orthodox/Charedi organization in the world. I also urge everyone to read Rabbi Avi Shafran’s excellent article on the matter.

Greenberg’s article repeats a canard that has gained traction among some anti-Charedi Jews: that Charedi rabbinical leadership in Europe, by not encouraging aliyah due to “defensive, insular theological thinking and lack of secular information”, to quote Greenberg, caused the death of many European Jews. The truth is that Hitler and Grand Mufti Haj Amin al-Husseini had plans to build crematoria in Samaria’s Dothan Valley, so as to rid the Holy Land of Jews. (Read all about it and the Mufti’s Nazi ties in this article; please also see here). Had British forces, under Second Lieutenant-General Bernard Montgomery, not defeated the German army in the battle at El Alamein, Egypt, the Jews of Eretz Yisrael would have been annihilated and incinerated into ashes. Thank God this did not occur. If the Charedi rabbis of Europe had been exposed to the full complement of secular information that Greenberg condemns them of rejecting, they would have been even more forceful in opposing aliyah at the time, and non-Charedi Jewish leaders in Europe would also have warned their constituents to avoid immigration to Eretz Yisrael. The Charedi rabbis, and most Jewish leaders in Europe and America, unfortunately were unaware of Hitler’s real plans for European Jewry until it was too late – blaming them for lack of timely information is foolish and cruel.

Greenberg’s screed is an incredible distortion of Torah belief, as he rejects the “biblical model in which God controls and does everything in history…” and asserts that catastrophic phenomena in the world happen on their own and are not part of Hashem’s plan, grossly misrepresenting a statement in the Gemara of “olam k’minhago noheg” (Tractate Avodah Zarah 54b) to mean that Hashem does not control what occurs. This is not at all what the Gemara states there, and it is fact how our sages describe the ideology of Amalek, as attributing occurrences to chance rather than to Divine Providence. (See commentaries on Devarim 25:18.) In contrast, it is eminently clear throughout the Torah that God runs the show, so to say.

Greenberg would do well to review the Rambam in Hilchos Ta’aniyos (1:1-3):

It is a positive commandment in the Torah to cry out and sound the Chatzotzros (Trumpets) upon every calamity that comes upon the public… And this is from the ways of teshuva – that when a calamity comes and people cry out and sound (the Chatzotzros), everyone will know that it is due to their negative actions that evil has befallen them… And this will help cause the calamity to be removed from upon them. But if the people do not cry out and sound (the Chatzotzros), but they instead say, “It is merely part of how the world operates (‘Minhag Ha-Olam’) that this has come upon us, and it just happened by chance”, this is the way of cruelty, and it will cause the people to retain their evil ways, and additional calamities will therefore come…

Although it is not our job to tell people why evil has befallen them, for we are not nevi’im – and the Sages tell us that Hashem can bring suffering upon pure tzaddikim people, as “Yissurin shel Ahavah/Punishments out of Love”  (Berachos 5a) – we dare not profess that the world operates by chance; all that transpires is from Hashem. We often do not understand why things happen, but Hashem is the Master Force of everything, in the absence of whose Will nothing can occur. This is a clear Torah axiom, and Greenberg’s assertion otherwise totally contradicts this most basic of Jewish beliefs.

It is most interesting that Greenberg chose The Jewish Week as his venue to castigate Charedim and purportedly attempt to help them see the light. The Jewish Week is not a Charedi or even an Orthodox publication, and the Charedim whom Greenberg claims he is trying to set straight do not read The Jewish Week and quite likely have never heard of it. Why did Greenberg choose such a forum for his attack? Does not a scathing disparagement of one group of Jews in a publication they do not even read amount to a hateful adding of fuel to the fire, as an unnecessary vehicle to stoke the flames of ill-will and hostility between Jews? If Greenberg sincerely intended to help, why did he not instead pen his piece in an Orthodox publication?

In contrast, readers are advised to see the exhortations of Rabbi Uren Reich, Rabbi Meir Twersky and the Karliner Rebbe, who delivered their important and instructive messages of warning and reproof directly to those who needed to hear them, rather than to potentially hostile audiences which had nothing to do with the matter. Why did Greenberg not do the same, rather than smear and malign a large community in a secular publication – an act which could only contribute to animus and divisiveness?

Greenberg has yet again proven that he does not represent Orthodox Judaism and that he is no friend of the Orthodox community. From his days of espousing beliefs that some felt were heretical while serving as a history professor at Yeshiva University, to Greenberg’s later declarations that God rescinded His Covenant with the Jewish People and that “Jesus is not a false messiah, merely a failed one” (!), to his current leadership role in the Open Orthodox movement – Greenberg is the last person whose perspective on Torah and the Torah community should be given any sense of credibility.