An Open Letter to the Ribbono Shel Olam 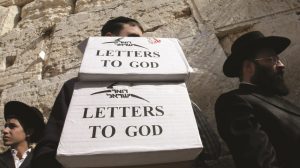 Please forgive the temerity of addressing You in this way. Actually, for mortal Man to address You altogether doesn’t really make sense. Why would You listen? Why should You care? But You do. You tell us You do in Your holy Torah. We don’t need any more than that.

Furthermore, You teach us that Man has the ability to rattle the gates of Heaven so much that You get up from the seat of Judgment and move to the throne of Compassion.

You’ve also taught us that we cannot really know You, for to know and grasp You, we would have to be You. Moreover, as You showed Moshe Rabbenu, we cannot understand what we (who are locked into time) call present and future. We can only know Your back – the imprints You have left behind in which we can discern Your activity.

So, absent a prophet (whom You have not sent), we cannot begin to discern what these cataclysmic events unfolding around us are all about. We only know that You not only are good, but the very essence of good. But we cannot answer the question of “why.”

On the other hand, You have taught us to always, in such times, ask the question “what.” What is it that You might be asking of us? We know that it begins with teshuvah, with repentence. We are taking the words of the Rambam very seriously, when he writes (Taaniyos 1:3) “Should the people fail to cry out [to G-d] … and instead say, ‘What has happened to us is merely a natural phenomenon and this difficulty is merely a chance occurrence,’ this is a cruel conception of things, which causes them to remain attached to their wicked deeds. Thus, this time of distress will lead to further distresses.”

We realize that we must do teshuvah. But teshuvah from what?

Your holy gemara offers various opinions about the identity of Eyov, whose bewilderment at what was happening around him preceded ours. One of those who is now certainly in your immediate presence (when he was with us, his name was Rav Yaakov Kamenetsky) explained that when there are so many explanations that make sense, our job is to learn from each and every one of them.

You have also reminded us again and again that the changing attitudes is not enough. You want to see something concrete. You want action, behavior. This is where I come in, if You will please excuse the chutzpah.

Again, it is in Your own precious Torah that I find the license to speak up. When You offered the Torah to Klal Yisrael at Har Sinai, You had Moshe climb down the mountain, speak to his flock, receive their response, and climb back up the mountain to present it to You. You knew what they would say. You knew when they actually said it. Why make Moshe formally present the answer to You? It is because this is the way You, despite being an Infinite Being, choose in Your greatness to deal with us mortals, limited by time and space. You deal with us on our terms.

I am well aware that I am not even a nitzotz of Moshe Rabbenu. But someone has to do this. If someone already sent you a formal report, You can ignore mine. But if not, let me make explicit what You already know, but perhaps are waiting for mortals to enunciate:

Your children are doing what You want them to do!

They are doing so much, that only You can keep up with the sheer volume of wonderful things that they have generated.

If only the Berditchiver Rebbe were alive! Certainly, he would do similarly to what he did in the past, and declare something like, “I, Levi Yitzchok, son of Soro Sosha, tell You that You need to deliver them now!

But I am not the Berditchiver, nor do we have anyone alive close to his greatness. So Your Torah will once again have to substitute. You taught us that the reason for the Nidah restriction is to make a wife precious to her husband like a bride, after a separation of a week. Yet a theme of Shir Ha-Shirim is that You are like a groom, and Knesses Yisrael is Your bride. And the separation between us has gone on already for longer than a week! Is it not time to relent, and welcome us back?

I am not including my address. You know where to find me. It would greatly help, however, if You would give us some better pointers on where to find You at this time. We miss You so much.

We hope You miss us.