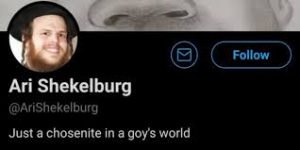 The message came from a fake account, like similar racist sentiments from similarly nonexistent “Jewish” users that flooded the social media giant Twitter a few months back.

A tweet, for example, from the fictional “Elaine Goldschmidt” who, “frightened by the string of anti-Semitic attacks,” bemoaned the fact that blacks (the tweet uses a much-reviled slur) “were supposed to be on our side. Now we have lost control of them.” The photo used in the profile was lifted from the account of a Scottish woman, Janey Godley, who, when she found out, was not pleased.

The tweet garnered hundreds of “retweets” and “likes,” including one, ostensibly from the unsubtly named, fictional “Ari Shekelburg,” who addresses “Fellow Chosen Ones…”

When first notified of the misleading and inflammatory messages, Twitter responded that “we didn’t find a violation of our rules in the content.” Soon afterward, though, the company reconsidered, and suspended the disingenuous account.

The social media incendiary devices above are samples of the work of white supremacists seeking to intensify anti-Jewish feeling in parts of the black community, and to sow the same among more educated blacks who may currently harbor no hatred for Jews. As one anonymous message on a site associated with white racists observed about one anti-black canard maliciously attributed to a Jew, “Posting this on black twitter would definitely stir the hornets [sic] nest.”

The bad players play both sides of the game, too, sharing concocted anti-Semitic sentiments by African-Americans or presenting actual ones as more representative of blacks than they truly are.

What apparently inspired the trolls was the fact that, while the Pittsburgh and Poway killers were white, more recent attacks on Jews, like the murders of Jews by a black couple in Jersey City, the attempted murder of Jews in Monsey last month and the obnoxious actions of some Brooklyn goons, were perpetrated by African-Americans.

What an opportunity, the race-baiters realized, to stoke the embers of hatred, to “divide and conquer” the two groups they most despise, Jews and blacks.

They mustn’t be allowed to succeed.

It was heartening and surprising to read of how Al Sharpton condemned the recent attacks on Jews, saying he was “terribly disturbed” by them, “particularly because they were perpetrated by members of the African-American community.” Mr. Sharpton, of course, was accused, and not without reason, of employing bombastic rhetoric that helped fuel the 1991 Crown Heights riots, in which 29-year-old Yankel Rosenbaum was surrounded by a large group of young black men and fatally stabbed.

Also heartening, and not surprising, were the words of Bernice King, the daughter of Rev. Martin Luther King Jr. and chief executive of the nonprofit King Center, who described the Monsey attack as an assault “against a people and a promise.” She tweeted that she was “praying for our Jewish family members” and encouraged “us all to refuse to adjust to anti-Semitic stereotypes and to rhetoric/language that dehumanizes,”

“We can’t pretend,” she concluded, “that hate is dormant.”

Radio host Larry Elder, also African-American, decried the fact that African-Americans are constantly being told that Jews are becoming wealthy by exploiting them, and asserted that “all this anti-Semitism coming from the black community against the Jewish community” shows “ignorance [of] the role many Jews played in the civil rights movement and as freedom-fighters.”

It might be futile to hope that black leaders’ exhortations will be able to cure the sort of cluelessness leavened with animosity toward “the other” that infects urban youths like the Brooklyn hoodlums who amuse themselves by harassing innocent Jews. Unfortunately, the diametric, odious messaging of rabble rousers like Louis Farrakhan strikes a more resonant chord in the imaginations of witless belligerents.

There will always be demagogues, Hitler wannabes like the “Nation of Islam” leader, and they will always manage to attract those whose aptitudes for critical thinking are no match for their susceptibilities to mental poison.

But one thing we can, and should, do is not let those vile actors and their gullible followers become the image in our minds of the larger African-American community.

If we do, we only play into the hands of our, and its, worst enemies.