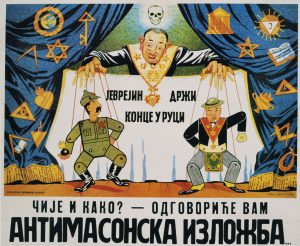 Last week saw the launch of an initiative born of a strange shidduch – between the foundation of famously progressive philanthropist George Soros and that of libertarian donor Charles Koch.

The “Quincy Institute for Responsible Statecraft” was introduced as a “transpartisan” think tank whose focus will be on promoting diplomatic agreement instead of military solutions.

The new enterprise takes its name from John Quincy Adams, the sixth American president, who, as Secretary of State in 1821, made a speech warning against the U.S. going abroad “in search of monsters to destroy.”

There are, however, in fact, a number of fearsome monsters out there, some of whom threaten our allies and our own country. It’s nice to imagine that diplomacy might contain them but, alas, sometimes military action is really the only effective course.

The hope for a pre-Moshiach peaceful world, unrealistic though it is, is vintage George Soros. The Jewish Hungarian-American investor (original name: Schwartz) has spent billions to spread democratic values and human rights worldwide.

He also has expressed some repugnant attitudes.

He revoltingly likened President George W. Bush and his administration to Nazis. Asked once about his thoughts on Israel, he replied: “I don’t deny the Jews to a right to a national existence – but I don’t want anything to do with it,” and he has blamed anti-Semitism on Israel’s policies.

At the same time, Soros has himself become a favorite bugaboo of anti-Semites, like Turkish President Recep Erdogan, who denounced him as “the famous Hungarian Jew Soros.”

His status as a prime target of haters came up during the House Intelligence Committee hearings last month.

Former top National Security Council staffer Fiona Hill delivered what was to many the most riveting testimony of the hearings. She told of a smear campaign against former U.S. Ambassador to Ukraine Marie Yovanovitch.

Ms. Hill pointed out that a conspiracy theory associating Ms. Yovanovitch with the much-vilified Mr. Soros was at the heart of a smear campaign against the respected ambassador, who was fired from her position by the president.

“When I saw this happening to Ambassador Yovanovitch…,” Ms. Hill said, calmly but forcefully, “I was furious, because this is, again, just this whipping up of what is frankly an anti-Semitic conspiracy theory about George Soros to basically target nonpartisan career officials.”

“This is the longest-running anti-Semitic trope that we have in history…” she continued, “the new Protocols of The Elders of Zion.” That reference, of course, was to the 19th-century forgery created by the Russian czar’s secret police that cast Jews as evil, all-controlling plotters against mankind, a book that is still published and cherished by anti-Semites to this day.

Some commentators, like Dinesh D’Souza, Alex Jones and Glenn Beck, have portrayed Soros as a Nazi collaborator.

For all his faults, that charge is silliness. During the Nazi occupation of Hungary, the future financier was a 13-year-old who, with the help of his father, who feared for his son’s life, assumed a false identity as the godson of a Hungarian official. That foster-father functionary was tasked with taking inventory at the homes of Jewish families so that their possessions could be taken by the Nazi authorities. Witnessing his protector taking notes was the extent of young George’s “collaboration.”

Nor is Mr. Soros a global puppet master intent on bending world powers to his will, as charged by conspiracy theorist Alex Jones (he of the “the Sandy Hook massacre of schoolchildren was staged” claim), convicted felon Roger Stone and attorney Joe DiGenova.

The latter (who, incidentally, led the prosecution of Jonathan Pollard) told Fox News, “There’s no doubt that George Soros controls a very large part of the career foreign service at the United States State Department. He also controls the activities of FBI agents overseas.”

No evidence of those assertions, however, was offered.

In October, 2018, Fox even banned one of its regular guests, Chris Farrell, of Judicial Watch, from the network, for falsely suggesting that Soros had funded a migrant caravan traveling through Central America.

Despite Mr. Soros’ “progressive” values and his (at best) ambivalence about Israel, it’s important to not buy into the utter vilification of the man – to realize that casting him as a fabulously wealthy aspirant to world domination is unadulterated anti-Semitism, a contemporary take on the portrayal of Jews as controlling the wealth, and thus the destiny, of the world. As it happens and just for the record, Christians hold the largest amount of world wealth (55%), followed by Muslims (5.8%) and Hindus (3.3%). Jews come in at 1.1%.

And so, Ms. Hill’s claim that making false assertions of Soros connections to smear people is thinly veiled anti-Semitism was, as they say in her native Great Britain (she became a U.S. citizen in 2002), spot-on.

Part of the bane of galus is that Jew haters will always seek Jewish malefactors to portray as emblematic of a nefarious pan-Jewish plot. And when they come up empty, they simply create demonic Jewish plotters out of thin air, like the “Elders of Zion.”

Or their version of George Soros.

Even with our own justified criticisms of the investor, we should take care to not buy into the Jew haters’ narrative and inadvertently aid those who spread libels and wish all of us only ill.