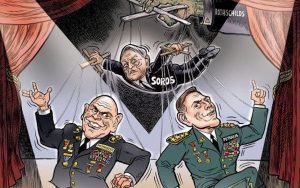 The memory of the New York Times International Edition’s offering of a Portuguese cartoonist’s depiction of Israeli Prime Minister Benjamin Netanyahu as a dog, magen David around his neck, held on a leash by a blind, be-yarmulked President Trump – had barely begun to fade.

And the cartoonist’s hero, as you might have guessed, is President Trump, whose reciprocal appreciation of the Montanan caricaturist came in the form of an invitation to last week’s White House “Social Media Summit.” The gathering, which took place last Thursday, was billed as a focus on the “opportunities and challenges of today’s online environment.”

“Honored to be invited to the White House! Thank You Mr. President!” Mr. Garrison gushed in a tweet, which, perhaps unexpected by the cartoonist, swiveled the spotlight back in his direction.

“Back,” because the cartoon that became the spotlight’s focus was one the cartoonist drew in 2017 and was denounced at the time by the ADL. The artwork depicted then-U.S. National Security Advisor H. R. McMaster and retired General David Petraeus being controlled by strings held by George Soros, who, in turn, is shown suspended from strings held by a hand labeled “Rothschilds.”

Subtlety, as noted, is not Mr. Garrison’s specialty. Presenting “the Rothschilds” as nefarious controllers of the world is one of the oldest and most persistent anti-Semitic themes out there.

That particular piece of artistry was commissioned by another of Mr. Garrison’s admirers, radio host Mike Cernovich. That would be the fellow who helped promote the bizarre “Pizzagate” conspiracy theory about Mrs. Clinton’s purported running of a human trafficking ring, which led to a credulous man firing an assault rifle in the D.C. area pizza parlor ostensibly involved in the criminality.

“The thrust of the cartoon is clear,” the ADL contended at the time. “McMaster is merely a puppet of a Jewish conspiracy.” With the recent resurrection of the cartoon last week, an assortment of commentators called out Mr. Trump for having invited Mr. Garrison to his event.

This is not, of course, the first time the president has been seen by some as coddling people with less-than-kind views about “Jewish influence.” He first fueled such speculation himself when, back in 2015, he told members of the Republican Jewish Coalition: “You’re not going to support me because I don’t want your money. You want to control your politicians, that’s fine.”

Then, in 2016, a Trump campaign commercial featured images of Mr. Soros, the object of vehement anti-Semitic scorn in Europe; Ms. Yellen, then Federal Reserve chairwoman; and Goldman Sachs chairman Lloyd C. Blankfein – all of them Jews – with the candidate warning about “global special interests” and “people who don’t have your good in mind.”

And then there was the other campaign ad that depicted Hillary Clinton labeled the “Most Corrupt Candidate Ever!” superimposed on piles of money, next to a large six-pointed star.

Then, the following year, after the violence at the white supremacist rally in Charlottesville, Virginia, there was Mr. Trump’s comment after the mayhem, that there were “some very fine people on both sides” of the Confederate statue issue – although only one side prominently yielded a crowd of marchers chanting, “Jews will not replace us!”

There are many reasons why many people don’t find Mr. Trump to be their cup of tea. Some include on their list of accusations that he harbors, or tries to encourage, anti-Semitism.

His Jewish daughter, son-in-law and grandchildren, his full-throated condemnation of anti-Semitism (“Our entire nation… stands in solidarity with the Jewish community,” he said after the Poway shooting, “We forcefully condemn the evil of anti-Semitism and hate which must be defeated”) and his unbridled support for Israel’s current government make the thought unthinkable.

As to the “evidence” to the contrary above, none of it is dispositive. Yes, it was all pounced upon by lowlifes like former KKK leader David Duke and Daily Stormer publisher Andrew Anglin to claim the president as one of their own. But, while the neo-Nazis are welcome to their fantasies, each of the instances of Mr. Trump’s alleged anti-Semitism can be regarded as, if somewhat tone-deaf, benign.

There’s no reason, though, to be so understanding about Mr. Garrison. Portraying “Rothschilds” as devious puppet-masters can reflect only one thing, and it’s not something pretty.

And so it was to its credit that, the day before the “Social Media Summit,” the White house rescinded Mr. Garrison’s invitation, thereby denying those who seek to portray the president as insensitive to Jews a new hook on which to hang their hats.

NOTE: This column was written before Mr. Trump’s most recent insults of several Congresswomen. For the record, I do not defend those ugly sentiments and would remind all that “go back where you came from” was regularly spewed against Jews by anti-Semites of the post-war period. And even if it hadn’t been, it’s un-American. One can have a rightly negative attitude toward people like Ms. Omar and Ms. Tlaib but still consider the suggestion that American citizens “go back” to their places (real or imagined) of origin to be deeply offensive. Which I personally do.