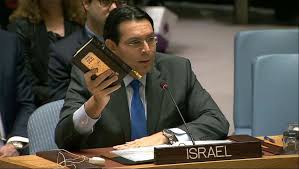 At one point in an address to the United Nations Security Council earlier this month, Danny Danon, Israel’s ambassador to the U.N., reached for a yarmulke, placed it on his head and read from a Chumash.

A video of what he then said went viral, propelled by supporters of Israel, prominent among them the worldwide Evangelical Christian community. Ambassador Danon’s words were translated into Spanish, Polish, French, Portuguese and even Turkish, and reached many tens of thousands of people. At this writing, the clip continues to gain momentum on social media.

Earlier in his speech, Mr. Danon introduced in brief the “four pillars” that, he said, link the Jewish People to Eretz Yisrael.

It was the first portion of his explication, though, the one for which he donned the kippah, and that has come to be called his “Biblical Speech,” that captured the attention of so many.

Mr. Danon quoted from Bereishis (17, 7-8), where Hashem appears to Avraham Avinu and promises:

“This,” Mr. Danon added, holding the Chumash aloft, “is our deed to our land.”

Of course, that is true. My first reaction, though, was to wonder whether it was proper, from a strategic perspective, considering our place in galus, to proclaim that truth in a most public and important international forum. Maybe, I thought, the lesser “pillars,” rather than the overtly religious one, should alone have been put forth.

But pondering the happening a bit more, it became impossible to not be reminded of the first Rashi in the Chumash (echoing two Midrashim), explaining why the Torah begins with an account of the creation of the world:

“For if the nations of the world should say to Klal Yisrael, ‘You are robbers, for you conquered by force the lands of the seven nations [of Canaan],’ they will reply, ‘The entire earth belongs to Hashem; He created it and gave it to whomever He deemed proper. When He wished, He gave it to them, and when He wished, He took it away from them and gave it to us’.”

And so, Mr. Danon’s presentation of his “first pillar” would seem, at least to me, to have constituted essentially a contemporary fulfilment of the Midrash’s predicted scenario.

The Palestinian representative, Riyad Mansour, was not present for Mr. Danon’s speech. After making his own presentation moments earlier, in which he condemned the United States for recognizing Yerushalyim as Israel’s capital and Israeli sovereignty over the Golan Heights, Mr. Mansour left the room, returning only when the Israeli representative had finished.

But other “nations of the world,” including the Arab ones – and Mr. Mansour himself, no doubt, at least after the fact – did indeed hear Mr. Danon’s words. And the Midrashim came to life.

There is, though, another important, if less enthralling, truth to remember here.

While it is important for the world to recognize the fact that, geopolitics and nationalism aside, Eretz Yisrael the land is indeed bequeathed to Klal Yisrael, we Jews need to remind ourselves of something else: The bequeathal, while eternal, is not unconditional.

This past Shabbos in shul, we read the “tochachah,” or “admonition,” in parashas Bechukosai. For the same reason that it will be read in a low voice and quickly, I will not excerpt it here. But we all know what it says, that it conditions Klal Yisrael’s right to inhabit Eretz Yisrael on our acceptance of Hashem’s laws. And we know, too, that we were expelled en masse from our land twice.

The latter three of the pillars cited by Mr. Danon are unrelated to shemiras hamitzvos. But the first one, the main one, the one that reflected that first Rashi, very much does depend on Jewish behavior.

That most vital point didn’t belong before the Security Council or the world. But it well belongs in every Jewish heart and mind.