The Emphasis on Empathy 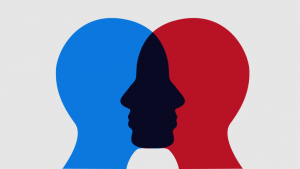 I suppose it’s not so strange that I put the two experiences together. They happened a mere day apart and both involved buses.

The first incident astounded me. As I stood in a line of people waiting to board an end-of-the-day bus at the Staten Island Ferry terminal, a young woman just walked up to the front of the line and, with nary a glance at anyone behind her, boarded the bus. Had she joined the back of the line as is normative, the seat she graced with her occupancy would have gone to someone else, perhaps one of the senior citizens who ended up standing during the ride.

The lady had no obvious physical impairment. She just seemed oblivious to the fact that other people occupy the universe, some even in her immediate vicinity.

I think I know what the line-cutter would have answered if asked how she would like it if someone stepped in a line in front of her. She would explain that, yes, she would have been angry, but that isn’t what happened; it was she who was entering the line out of turn, not someone else.

Empathy-impairment is an impressive thing.

We don’t start life off empathetic. Rav Yaakov Weinberg, zt”l, once mused aloud to me that there’s nothing more self-centered than a baby, and that’s probably why Hashem makes them so endearing; otherwise we might not properly care for the selfish little people.

But who can – emphasis on “can” – grow into empathic adults.

I remember how, as a little boy, I tested a magnifying glass I had received by focusing sunlight with it onto pieces of paper, charring them. And how I then – ugh – “graduated” to weaponizing my educational tool by using it to incinerate ants. Some experts claim that killing insects as a child presages the eventual emergence of a serial killer. So far, though, baruch Hashem, I haven’t much felt the urge to murder; when I have, I have managed to overcome it.

In fact, today, when an insect finds its way into my home, I capture the invader and escort him or her safely to the great outdoors. (All right, not mosquitos; but they are aggressors.)

After all, how would I like it if someone chose to squash or flush me away?

Being concerned with the wellbeing of an insect is a low rung on the empathy ladder. The ultimate and most powerful concern for “the other” is for other people.

Which brings me to the second bus incident. The next morning, I boarded a mass transit vehicle that takes a rather convoluted route. It was the first time, apparently, that the driver had driven the route and before any passenger could stop him, he turned into a one-way street. A dead end.

It was a narrow street, and the “three-way turn” that the driver of a car might execute wasn’t an option. Backing up would be tricky.

I waited for the expected New York reaction, passengers’ grumbling and shouting of insults at the hapless driver. A pleasant surprise, though, awaited me. Not only didn’t my fellow travelers vent their collective spleen, many of them rushed to reassure the mortified man at the wheel not to feel badly. One man offered to stand behind the bus and direct its delicate backing out of the cul de sac, which was successful.

Everyone knew we would miss the ferry we had hoped to catch that morning. But everyone just cheered the driver, who was clearly happy with his lot – of passengers. Who, instead of being self-centered, demonstrated empathy.

People gauge gadlus ha’adam by many things. But the most essential marker of human growth may well be how far one has progressed from the selfishness that defines us at birth toward true empathy. The severely empathy-impaired, like the young woman on the bus line (and psychopaths), are essentially infants.

For members of Klal Yisrael, the import of empathy is evident in Rabi Akiva’s statement (quoted by Rashi) that the passuk “Love your fellow as yourself” (Vayikra, 19:18) is a “great principle of the Torah.” And in Hillel’s response to the man who insisted on learning the entire Torah on one foot: “What is hateful to you do not do to your fellow. That is the whole Torah; the rest is the explanation; go and study it” (Shabbos, 31a).

But dedication to an “other” is, in its most sublime form, expressed as selfless dedication to the Other. We are born selfish; and meant to strive toward concern for our fellows, but, ultimately, for the will of Hashem.