Rabbi Yechiel Eckstein – What They Missed 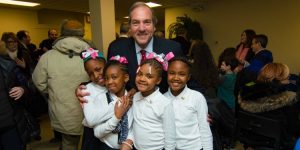 Although I never met him, I thought I understood who he was. At the levayah on Thursday, I learned how wrong I was.

I thought I understood him, because his work over the decades single-handedly created the environment for some of the work I do for the Simon Wiesenthal Center, at least insofar as evangelical Christians. At the levaya, the speakers shed light upon other important and admirable dimensions to his life.

I never had imagined him to be a gartel-wearing, Shlomo-singing, guitar-playing type with boundless happiness and energy, well before anyone heard of neo-Chassidus.

I had thought that the claims about how much money he had raised for Israel and other causes – about $1.5 billion – were the boast of a marketer. The large number of organizations that testified to the extent of his support over the decades erased that mistake. The scope and scale of whom he helped was enormous.

I had thought that whatever he distributed was a function of how successful he had been in tapping into conservative Christian support for Israel. I learned that I had reversed things. What he distributed was primarily a function of his love for Jews, Israel, and humanity (including a campaign for poor Muslims in Morocco during Ramadan), especially including individuals, not just large entities. Finding the donors was secondary.

I learned that he was one of the very rare individuals who was successful in a demanding vocation, but still managed to tune out all else when devoting himself to his children.

I was surprised at how many who spoke did not fully grasp how important a non-monetary contribution he made to the Jewish State, firming up the support of tens of millions of ardent supporters of Israel in the evangelical community. The only one who got that right was Nir Barkat, the former mayor of Jerusalem. That support is invaluable; no amount of money could have bought it. That support, bederech hateva, will remain an important component of Israel’s arsenal in fighting the war to delegitimize it.

For our readers, an important nuance of the above has to be added, that I believe even the former mayor missed. Christians who have learned for a variety of reasons[1] to support Jews and Israel sometimes are hard-pressed to figure out why G-d wants them to bless people whose values are often so contradictory to their own. The secular and heterodox Jews they run into are passionate about abortion rights and gay marriage, and don’t seem very keyed into Scripture. Evangelicals can live with the contradiction, because they trust G-d. But cognitive dissonance still exacts a price. We learned that many centuries ago. That’s why giants like R Aharon HaLevi wrote Sefer HaChinuch. They realized that committed Jews will faithfully observe all of HKBH’s commandments, even if they could not understand them, but that offering explanations for those mitzvos would make them much easier for people to observe! R. Yechiel Eckstein, z”l, made it much easier for conservative Christians to identify with a Jewish state without grimacing at times.

Rabbi Eckstein introduced millions of Christians to nuance within the Jewish community. From him they learned that Orthodox Jews – the Jews who believed, like they did, that Torah was given by G-d – were different from others in many ways. They saw in his behavior and his values the fruits of obeying G-d’s Word. That made it easier for them to see that G-d’s continued covenant with all his people made sense.

Decades after Rabbi Eckstein began the bridge building, it had become common for evangelicals to openly write about their appreciation of Orthodox Jews, as distinct from others. They knew they would never convert us, but they delighted in that those who cherished G-d’s commandments lived better lives because of it, even if they as Christians had been “freed” from the Law.

Others continued the work. Most notably, ybd”l Rabbi Daniel Lapin diligently went from community to community, showing conservative Christians than not all Jews were politically liberal, and that Jews who valued Scripture were more likely than others to share some of the same political leanings that they did.

One of those who eulogized R. Eckstein charged the audience with continuing his work. Some undoubtedly will see that the International Fellowship of Christians and Jews continues to flourish. All of us, though, can play a role in the kiddush Hashem that we can make in front of the many Christians who do not hate us, and in fact look to us to demonstrate that how wonderful and spiritually charged a Torah lifestyle can be.