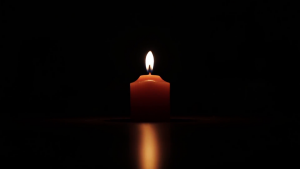 I’m always struck by the contrast this time of year between, on the one hand, the garish multicolored and blinking lights that scream for attention from so many American homes and, on the other, the quiet, tiny ones that softly grace the windows of Jewish ones. I think there may be cosmic meaning in Chanukah’s tendency to roughly coincide with a major non-Jewish holiday season.

For, while Chanukah is often portrayed by some Jewish clergy on radio programs and in newspapers as nothing but a celebration of religious freedom (or even, bizarrely, as some sort of salute to religious pluralism), the true meaning of the neiros Chanukah is clear from the many classical Jewish sources about the holiday – from the Gemara to the sifrei Kabbalah to the works of Chassidus. The celebration is entirely about the struggle to maintain Jewish integrity and observance within a non-Jewish milieu, to resist assimilation into a dominant non-Jewish culture.

The real enemy at the time of the Maccabim was less the Seleucid empire as a military power than what Seleucid society represented: a cultural colonialism that sought to erode the beliefs and observances of our mesorah, and to replace them with the glorification of the physical and the embrace of much that the Torah considers unacceptable. The Seleucids sought to acculturate the Jewish people, to force them to adopt a “superior,” “sophisticated,” overbearing secular philosophy. And so, the Jewish victory, when it came, was a triumph not over an army but over assimilation. The Maccabim succeeded in preserving the mesorah, and protecting it from dilution.

The overwhelming gloss and glitter of the non-Jewish celebration of the season are thus a fitting contrast to the still, small, defiant lights of the Chanukah menorah.

And in times like our own, when the larger Jewish world, l’daavoneinu, is so assimilated, and intermarriage so rampant, nothing could be more important for American Jews than Chanukah’s message.

Some try to make lemonade out of the bitter fruit of contemporary Jewish demographics, choosing to celebrate the incorporation of the larger society’s perspectives and mores into “new forms of Judaism,” and to view intermarriage as a wonderful opportunity for creating “converts” – or, at least, willing accomplices to the raising of Jewish, or Jewish-style, children. But they are dancing on the deck of a Jewish Titanic.

Lowering the bar for what constitutes Jewish belief and practice does not make stronger Jews, only weaker “Judaism.” And intermarriage is a bane, not a boon, to the Jewish future.

Over so very much of history, our ancestors were threatened with social sanctions and violence by people who wanted them to adopt foreign cultures or beliefs. Today, ironically, what threats and violence and murder couldn’t accomplish – the decimation of Jewish identity – seems to be happening on its own. Where tyranny failed, freedom is threatening to succeed.

Poignant meaning shines forth from the Bais Hamikdash’s menorah’s supernatural eight-day burning on a one-day supply of oil. For light, of course, is Torah, the preserver of Klal Yisrael.

Even the custom of playing dreidel is a reminder of that symbol of Jewish continuity. The Seleucids, it is related, had forbidden not only various fundamental mitzvos and hanhagos, they also outlawed the study of Torah, which they understood, consciously or otherwise, is the engine of Jewish identity and continuity. The spinning toy was a subterfuge adopted by Jews when they were studying Torah; if they sensed enemy inspectors nearby, they would suddenly take out their dreidels and spin them, masking their study session with an innocuous game of chance.

The candles we light each night of Chanukah recalling that menorah miracle reflect a greater miracle still: the survival of Klal Yisrael over the millennia. All the alien winds of powerful empires and mighty cultures were unable to extinguish the flames of Jewish commitment. “Chanukah” means “dedication.” It doesn’t just recall the Bais Hamikdash that was rededicated bayamim hahem, but calls on us to rededicate ourselves baz’man hazeh.

We do that by keeping ourselves from melting into our surroundings, and resisting the blandishments of those who insist that there is no other way. We know how to put the dreidels away and open the sefarim.

And with our determination, our mitzvos and our limud haTorah, we can prove worthy descendants of those who came before us, and continue as a people to persevere.

The great and powerful empires of history flared mightily but then disappeared without a trace. Their lights were bright but artificial.

Ours, small as they may be, are eternal.