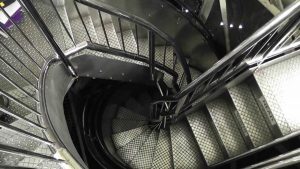 I pass the large lady twice each workday, and no longer pay her much mind, unlike the tourists on the Staten Island ferry sailing with me, who have journeyed hundreds or thousands of miles to get a glimpse of – and, of course, a selfie with – the Statue of Liberty.

But when we moved to New York 24 years ago, we visited the statue with our children. The visit yielded one of those “kids say the funniest things” quotes, one we invoke to this day.

We marched up the 150 or so steps of the double spiral staircase from the statue’s base to its crown. It was an increasingly claustrophobic experience, as the passage grew narrower with our ascent, but with each step I marveled at the fact that I was actually walking inside the gift from France and symbol of freedom across the globe, seeing it from an entirely new perspective.

Impressively, even the youngest member of our family, a bright and energetic then-three-year-old, managed to scamper up the steps with his little feet.

His memorable comment, delivered with puzzlement, when we reached the top: “Where’s the slide?”

If he was distressed by our laughter and explanation that, unlike the culmination of other climbs he had made, there was no slide here, he didn’t show it. And while he may have wondered about the point of it all, good soldier that he was (and is – today as a member of Rav Shimon Alster’s kollel in Cliffwood, New Jersey), he dutifully marched with us back down.

So “Where’s the slide?” has become the Shafran family’s version of the saying, attributed to cartoonist Allen Saunders, “Life is what happens to us while we are making other plans.” Fixation on some end can obscure what one is experiencing now.

Yiddishkeit certainly focuses us on both the past and the future. As Jews we are enjoined to remember and try to emulate the Avos and Imahos, to recall Mattan Torah, the Beis Hamikdash and more. And we are ultimately enjoined to defer the impermanent indulgences of Olam Hazeh for the only meaningful and ultimate fulfillment of the future, Olam Haba. But none of that contradicts our need, at the same time, to recognize the import of the moment, the opportunity that the present alone provides.

We often find ourselves so focused on the slide that we don’t notice where we actually are, so absorbed in the later that we are oblivious to the now.

My wife and I try to get away for a day or two each summer in search of a waterfall we haven’t yet seen. Several years ago we hiked up a steep trail to experience Kaaterskill Falls, in upstate New York.

About 100 miles north of New York City, the falls have two tiers, with a combined height of 230 feet, higher than Niagara Falls. We didn’t know it at the time, but the falls have been the site of several fatalities, at least eight since 1992.

According to Rob Dawson, a state forest ranger, the last four people who died at Kaaterskill Falls were either taking or posing for pictures. They were focused, quite literally, on creating mementos of their having reached the falls – or, more likely of late, on transmitting images of themselves there to their friends and relatives on social media.

It’s understandable, of course, for a person to want a photograph of an achievement or event, and usually, baruch Hashem, the endeavor isn’t fatal. But reading of the tragedies reminded me of Saunders’ adage, and made me wonder if our obsession with documenting things hasn’t overly encroached on the wonder of actually experiencing them.

Think of all the time, effort and trouble that go into creating chasunah photos and videos. Leave aside how often most people really look at them after the first time. Just think of how much the recording of a simchah can deprive the principals and celebrants of enjoying the moment. (Please, professionals, no angry letters! I don’t mean to, chalilah, devalue your skill and work, only to spur thought.) And with the ubiquity of cellphone cameras, how much time people spend staring at little screens depicting joyous occasions rather than being parts of them.

There were no cellphone cameras when we navigated the Statue of Liberty’s innards; we hadn’t bothered bringing my Minolta. But even though we have no photos of the experience, and our little boy may have been disappointed by it, the trip to the crown, even sans slide, remains most memorable and vivid in my mind.