Moral Breakthrough At Stanford: PTSD In A Time Machine 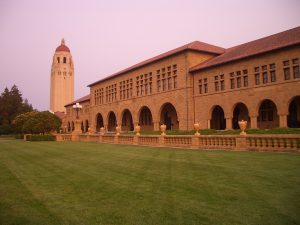 Stanford student Hamzeh Daoud took the easy way out, after threatening Jews with physical violence. In going down, he added a new term to our lexicon, and an important tool in evading moral responsibility. The term will take its place alongside such important contributions as “snowflakes” and “micro-aggressions in sucking the resolve and strength out of Western Civilization. He blamed his anger mismanagement on his suffering from “transgenerational trauma.”

Daoud, 20, who served in the Undergraduate Senate at Stanford, wrote in a Facebook post last month that he will “physically fight zionists on campus next year if someone comes at me with their ‘Israel is a democracy’ bulls**t … and after I abolish you’re a** I’ll go ahead and work every day for the rest of my life to abolish your petty a** ethnosupremacist settler-colonial state.” Under pressure, he later substituted “intellectually fight” for the offending words. As calls for expulsion and prosecution mounted, Daoud resigned his position as a residential assistant, and played the “transgenerational trauma” card. His grandparents had been among those who fled during Israel’s 1948 War of Independence. He was still suffering from long-term PTSD. The nakba made him do it.

Surely he has given us much to think about. It may be the greatest gift that some of his like-minded relatives have given the West since inventing plane hijackings and suicide belts. It should follow from his thinking that if some Jewish students at Stanford were to proclaim that Daoud was an unnecessary burden on the ecosystem, which would be far better off without him, that they should be excused their verbal trespass as grandchildren of those who suffered far worse things in Auschwitz than fleeing their village. Any chance that that would happen? Cop-killers might find refuge in a claim that they have still not gotten over the horrifying effects of an ancestor’s trans-Atlantic passage in the hold of a slaver, or even a forebear’s discourteous treatment at a traffic stop. In truth, Daoud’s argument could unseat all of criminal justice. What if – just what if- a person’s crime of passion was nothing more than a flare up of a repressed transgenerational memory? You know – the time some prehistoric predecessor stepped out of a cave, and had to clamber up a tree to escape the advances of a hungry woolly mammoth? It takes a long time to get over things like that, you know.

Stanford administration was relieved. It took an easy, cowardly, and – of course- politically correct – way out, rather than expelling him, which is exactly what would have happened to anyone threatening violence against black, Hispanic, Muslim, or LGBT students. It just doesn’t happen to people who threaten Jews. (And, after all, he didn’t really threaten Jews. Just those terrible Zionists, who of course are unrelated to Jews.) After looking into the matter and reading Daoud’s statement, the administration concluded “that the student does not pose a physical threat to other members of the community.” They did nothing more.

Now, whether or not Daoud himself will be a threat is not for my conjecture. But we do know this about calls to violence. Eventually they are heeded, unless they are sharply and decisively repelled. Americans understood this when they reacted with wall-to-wall disappointment to the President’s initially weak reaction to Charlottesville last year. The fact that Stanford made do with a slap on Daoud’s wrist will certainly empower the other haters waiting in the wings, if not now, then in the future. (Daoud’s Jewish supporters in Jewish Voice for Peace and in Students for Justice in Palestine – who launched a campaign of support for Daoud – have nothing to worry about such escalation. To be sure, none of their grandchildren will be Jewish. Jewish self-hatred and disloyalty are part of a fast-track to disappearance as Jews.)

Daoud signed his statement, “From a Muslim, Third-Generation Palestinian Refugee.” There is some irony – others would call it cultural appropriation – in donning the mantle of “refugee” while he is drinking deeply from wells of privilege at the West Coast’s version of an Ivy, rather than sharing the privation of some hundreds of thousands of genuine refugees internally displaced in Syria. But that misses the real point, which is how he and other Palestinians deal with the grievances of the past. The term transgenerational trauma originated in the study of second-generation Holocaust survivors. The findings – and the term – are controversial. It is a matter of fact, however, that the reactions of Jews to the Holocaust and Arabs to the events of 1948 could not be more different. Jewish survivors struggled and succeeded in building new lives and families, and adapting to the countries to which they moved. More importantly, they took a fledgling third-world state and built it into the only successful democracy in the Middle East, pausing every now and then to stave off the murderous designs of her neighbors and absorbing millions of refugees who came in successive waves. The Palestinians could have done the same, but preferred to don a laurel of victimhood, teaching their children never to give up the attempt to throw the Jews out, and basking in the glory of self-imposed poverty and hopelessness.

If there is transgenerational trauma, it is to the rest of the world that deals each day with the inflated rolls of UNRWA and its perpetuation of victimhood. Perhaps Daoud will help convince some in the West to stop supporting those who allow too many people to feel sorry for themselves, rather than giving their children a chance at a future of security and success which they would have if they came to the negotiating table.