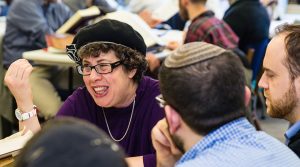 There now seems to have arisen the latest recurring chapter in the never-ending saga of situations where radical-left rabbis in America expect and demand that the Israeli Chief Rabbinate recognize them and their “conversions” as valid Orthodox conversions.

In the newest tweak, a letter has been produced by which the Rabbinate did not recognize a conversion authenticated by a Rabbi Akiva Herzfeld.  For some in the left-wing media, this is a new cause celebre: Wow!  The Israeli Chief Rabbinate will not recognize conversions by Akiva Herzfeld, who graduated from an “Open Orthodox” seminary!

But this is no news story worth the ink. This is no scandal.  Because few, if any, normative mainstream Orthodox rabbis in the United States would recognize any “conversion” conducted by that rabbi, nor would his written attestations make the slightest difference to us.  If a man walked into my Young Israel shul at a service where there are nine men at the prayers, one short of a minyan (quorun) for reciting Kaddish (a memorial prayer recited for a deceased loved one), and it were my Dad’s soul for whom Kaddish needed to be recited that day, I still would not recite that Kaddish prayer if that tenth man were to tell me that he had been “converted” to Judaism by that rabbi.  Because that still would leave me with nine Jewish men in the room, plus a very sweet guy who is not Jewish.

Time and again these columns have warned the Jewish public and particularly the universe of non-Jews contemplating conversion to Judaism  — in Israel, in America — that the normative mainstream American Orthodox rabbinate, no less than the Israeli Chief Rabbinate, does not recognize the validity of “conversions” conducted by people of certain theological distortions.  It does not matter that some rabbi says “But I am a rabbi!  I have ordination!  Here, look at my certificate!”

Just this past week, a handful of new Reform rabbis were ordained in California.  At their ordination, the keynote speaker not only attacked Jews in general and Israel in particular — and was known to the rabbinical institution for his long and nasty history of attacking Israel — but he even further attacked the Judaic theological primacy of endogamy: that a Jew must marry a Jew.  Instead, he advocated — at a rabbinical ordination program — intermarriage of Jews with non-Jews.

So when a Reform rabbi comes to Israel and says “I am a rabbi,” that does not automatically mean that Israel should be rolling out the red carpet at the Kotel (Western Wall) and giving Judaism’s holiest site over to her or his theological misdirection. There are American rabbis who hate Judaic rituals like mikvah.  There are American rabbis who are world leaders in convincing non-Jews throughout Europe and on American campuses to boycott Israel, to persuade their universities and companies to divest shares of corporations who do business with Israel, even to sanction Israel. Israel rightly even has refused to allow some of the haters in. A rabbi who advocates for BDS against Israel indeed should be kept out of Israel — just as America, England, Canada, and other countries bar certain noxious public nuisances from entering within their borders.

Chovevei Torah began as a fascinating experiment.  Many thought it would become an Orthodox flagship seminary of “Modern Orthodoxy.”  Then again, a century earlier, many of the earliest founders of the Jewish Theological Seminary (JTS) were Orthodox rabbinic leaders who mistakenly thought JTS would become the Orthodox flagship seminary of “Modern Orthodoxy.”  Somehow, JTS became the seminary of “Conservative Judaism,” and it now ordains people who are so far removed from the founders’ visions that leading faculty of JTS finally resigned.  Today Conservative Judaism is akin to Reform Judaism, and they both are quite of a similar mindset on virtually all the key hot-button theological issues of the day, with only the last vestiges of differences.  And the history of the past century evidences that Conservative Judaism will adopt any radicalization of Jewish theology within twenty-five years or so of Reform first breaking the standards of Judaism.

Likewise, early in its evolution Chovevei Torah’s founder and theological navigator decided to brand its theology as a new denomination: “Open Orthodoxy.”  It was not the Israeli Chief Rabbinate that called YCT “Open Orthodox.”  It was not the Orthodox Union nor the Rabbinical Council of America nor Agudah. It was they who stepped out of normative mainstream Orthodox Judaism and denominated themselves as a new theological breakaway: “Open Orthodoxy.”  And they now ordain rabbis.

Among their rabbis are rabbis who publish in Jewish publications advocacy for intermarriage with non-Jews.  Should the Israel Chief Rabbinate recognize them or their conversions?  I would not.  I do not.  None of us does.  Nor do I live in a vacuum.  I live embedded in American Orthodox rabbinics.  Such a rabbi’s “conversion attestations” have absolutely no meaning to us.

Others among these YCT-ordained “Open Orthodox” rabbis are married to wives who publicly tell newspaper interviewers that they do not believe in G-d.  Does your shul’s rebbetzin believe in G-d?  Would any normative mainstream Orthodox congregation hire a rabbi whose wife publicly parades that she is an atheist and does not believe there is a G-d Who created the world in six days and rested on the seventh, Who took the Jews out of Egypt and gave us His Torah laws at Sinai?  How good must her chulent recipe be to get her husband hired at a congregation of such ilk?  Would you want her teaching Judaism to your children?

Chovevei Torah ordains rabbis who marry non-Orthodox cantors and rabbis, and some of them even then go off with them to their temples. Chovevei Torah ordains rabbis who publicly attack the kosher food industry in the pages of non-Jewish American publications, evoking noxious images and toxic language that conjure up the worst memories of the battles to save kosher ritual slaughter from anti-Jewish efforts to ban shechitah (kosher slaughter) in the 1950s.

All because a man or a woman is ordained with a piece of paper to be an “Orthodox rabbi” by an “Open Orthodox” ordination seminary — namely Yeshiva Maharat or Chovevei Torah — that does not mean that her or his “conversions” will mean anything theologically to the vast and overwhelming majority of American Orthodox rabbis.

The Orthodox Union will not allow the Maharat graduates into any pulpits, notwithstanding their ordination.  The Rabbinical Council of America does not admit anyone whose defining credential is ordination from Chovevei Torah. The National Council of Young Israel does not recognize Chovevei Torah ordination as acceptably qualifying for a Young Israel pulpit. “Open Orthodoxy” is repugnant to actual Orthodoxy.

None of this has anything to do with the Israeli Chief Rabbinate.

In the case of Akiva Herzfeld, surely he is a nice fellow. So are many other people — Jewish and non-Jewish — and “nice” is not the same as “recognized Orthodox rabbi.” His theology speaks for itself, representative of the very reason that normative mainstream Orthodox rabbis in America do not regard “Open Orthodoxy” as a valid expression of Orthodox Judaism (even if they have arrogated the term “Orthodox” for their own purposes).

Here is an Akiva Herzfeld sample, equating two events: (i) the Maccabees’ fight to liberate the Holy Temple (Beit HaMikdash) in Jerusalem from Greek occupation, and (ii) the political movement to recognize homosexual marriage in the state of Maine:

“While the Greeks looked much stronger, the Jews had a powerful weapon on their side: their hearts. . . . The Jews fought for their religious liberty, and this motivated them despite the odds against them. . . . We light Hanukkah candles each year to remember the ancient miracle. . . . This Hanukkah, I celebrate the past and the present. With my very own eyes, I have seen a great miracle this year right here in Maine. A small group of people, homosexuals and their supporters, stood up for their equal rights in marriage. . . . Vast numbers of people stood against them.

“A few years ago, the gay rights supporters were defeated at the polls in Maine, and the sacred ground of their pure hearts was crushed. They continued to fight because they knew that justice was on their side. This year they overcame the odds, and finally won. My conversations with friends in Maine helped convince me of the rightness of the same-sex marriage cause. I signed a letter in support of ‘Yes on 1’ together with other rabbis in the state, including Rabbi Jared Saks of Congregation Bet Ha’am, the Reform temple in South Portland, and Conservative Rabbi Rachel Isaacs of Beth Israel Congregation in Waterville. The truth of their hearts helped me overcome my wall of religious textual evidence that helped justify arguments for the other side. . . .

“This Hanukkah as I light my menorah, I think of our modern battle that was won in Maine for equal rights. We have witnessed a miracle, as a small group of people of faith won victory over strongly entrenched, wrong beliefs. It is a miracle of love. Soon, some people consecrating their love in religious ceremonies of marriage will ask for God’s blessing. Our society has already blessed them.”

So why blame the Israeli rabbinate for not recognizing American “conversions” that American Orthodox rabbis also do not recognize?