Moving Commentary 8: Love Up Close and From a Distance 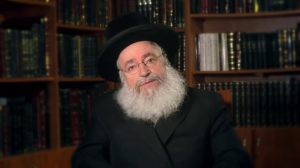 R. Yehuda HaLevi wrote about journeys on which his heart took him – back to the splendor of Israel before the Destruction. כל תענוגים בבא בסרך / All the delights of the world found their way to the Land. Today’s visitor to Israel can see more of Israel’s beauty in an hour in a car than the author of Kuzari could have ever imagined. I have always loved the sheer variety of landscape and scenery packed into our tiny country. Yesterday I took a similar trip on an emotional plane. More specifically, back-to-back shiva calls took me to very different expressions of love.

The first was to Maran R. Asher Weiss, shlit”a, who lost his wife a few days ago. I fully expected the crowd to be large, given his prominence (and uniqueness – this is not the place to explain). In my experience, most people who take the time to be menachem aveil/ comfort the mourner do so in the (accurate) belief that they have an opportunity to provide a very special kind of chesed. They understand how their presence – and how drawing out words from the mourner about the deceased – helps the grieving process like nothing else. Hence, they feel (deservedly so) a sense of obligation to help out.

I saw something different on the faces of the people around me. Even those who were many years his senior (for all his accomplishment, he is relatively young – still in his early 60’s) looked at him and spoke towards him with love. I use the word deliberately. It was more than admiration – and certainly well beyond obligation.

The love was reciprocated. R. Asher sat there, his eyes clearly reddened from crying, very much in charge. Because his network is so diverse, and he touches so many different groups and people, there were many who looked different from the large collection of roshei yeshiva and Torasan umnasan/ full-time learners. R. Asher reached out to them in particular, calling them by name, and engaging them in conversation. (I had travelled there together with my friend R. Reuven Tradburks, the RCA representative in Israel. I pointed out to R. Asher that the first notice I received of the petirah – minutes after that of R. Asher’s own organization – was from the US Modern Orthodox RCA, and was a testimony to how effective he is in bridging the distance between communities.)

Someone slipped him a piece of paper. He read it to the crowd. It showed that the gematria of his wife’s full name equaled the famous line of R. Akiva. Surrounded by tens of thousands of his students, he was approached by his wife whom he had not seen in many years. Not knowing who this strange woman was, they tried shunting her off to the side. Rabbi Akiva stopped them. “Leave her be! What is mine and what is yours is all really hers!” R. Asher quipped, “I could have told you that without the gematria.” He then spoke lovingly of his wife. How when her cancer recurred six years ago, she did not tell him until all tests were concluded and surgery had to be scheduled. How even when she flew to NY for the surgery and required a full week of pre-op, she insisted that he not join her till the day before. How she engineered – despite countless hours he spent at her bedside – that he never missed a single scheduled public shiur throughout the ordeal.

There was a lot of love going around.

At the shiva of Ronen Lubarsky Hy”d, a different kind of love was in evidence. R. Tradburks and I drove to Rehovot directly from R. Asher’s home. Lubarsky was an elite Duvdevani combat soldier, sent to a Palestinian refugee camp near Ramallah to apprehend a few terrorists who, according to army intelligence, were planning a terrorist attack. The response of residents is to throw things down upon them – refrigerators, furniture – from the roof. In this case, it was a marble slab from a third floor window. It struck him in the head; he succumbed to his injuries two days later.

The army set up a tent for the mourners in the parking lot behind their apartment building in a very Russian neighborhood. Most of the crowd was secular Russian – family and friends. Army buddies were there, along with an army presence standing guard, and special officers sent to bereaved families to help them at their time of loss. One very haredi-looking fellow arrived to drop off food. Ronen’s father and brother wore yarmulkes; few others did. We introduced ourselves briefly as not knowing their son and brother, but wanting them to know that people thousands of miles away felt for them and understood that Ronen’s sacrifice was for all of us. They were clearly appreciative.

The couple we sat down next to were clearly frum. We quickly learned that they had sustained a similar loss some eleven months before. They were now committed to take what they had learned in their own post-shiva experience and share it with others who had lost children. This was their first foray into this activity, and they were understandably nervous. They were not in the employ of the army or any organization. They acted entirely out of commitment to those who had made the ultimate sacrifice, and the loved ones they left behind to grieve.

At some point, the mourners vanished. When we left a short time later, we quickly understood why. Two very official cars had pulled into the driveway. The President of Israel had come – as he does to all families of soldiers killed in the line of duty – to pay a shiva call. They had moved into their apartment to gain some privacy so they could talk together – the heart of the Israeli head of state reaching out to the hearts of the bereaved family.

It was a poignant moment, not to be missed. People who would otherwise never have met, taking on the pain of strangers. Pain in the loss of someone who himself had put himself in a position of danger in order to protect the lives of people he never knew. A country reaching beyond anonymity to say, “We understand that the sacrifice was for all of us. We never ran into you before, but we can say, ‘We love you.’”

Heading back to Yerushalayim, there was more of the beauty that R. Yehuda HaLevi only conjured up in his mind’s eye. The agricultural lands were alive in a thousand shades of color. A few months ago, the vines looked like stick figures, with arms held aloft, as if asking why they stood there, exposed and denuded. Now, in the spring, the answer had come, and the vines were all laden with emerald bounty. The emotional scenery had also been rich and variegated. I had seen the love that comes from closeness and relationship, especially towards a world-class talmid chacham who touched the lives of many thousands. I had also seen the love that reaches out from a distance, bridging language and cultural differences, but that found at its core the connection between Jew and Jew.

All love, all ahavah, comes from the same place. It is one of the realities found within G-d. When we consciously pick it up and lay it at His doorstep, we bring ourselves closer to Him as well. May He bind up the wounds of Klal Yisrael, and allow us to join Him in the final celebration of return.