A Tale of Two Speeches 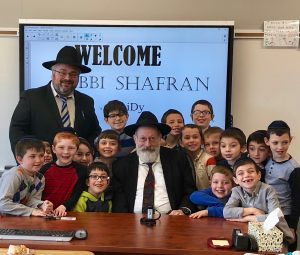 I had the honor of making two public presentations in recent days, one to second grade students at the impressive Yeshiva Beth Yehudah in Southfield, Michigan; and the other, to students and members of the public at the University of Maryland.

The first gig was dearer to me, since the members of my audience were people not set in their ways and thus open to my message, which was about what makes kids kids and grownups grownups. (The boys shared various ideas and I, mine: Awareness of Consequences – hey, it’s never too early to learn a new word.) But the class has a wonderful Rebbi and really didn’t need my own input.

By contrast, the audience at the second presentation, which was sponsored by the Gildenhorn Institute for Israel Studies, included many middle-aged and older members, less open to changing their attitudes, which are largely and unfortunately detached from the Jewish mesorah. They were proud Jews, to be sure, but with an assortment of misguided notions of just what living Jewish really means.

And yet, from the sentiments conveyed by attendees who approached me after my participation in a panel discussion of whether there is a divide between American Jews and Israel, the presence of an unabashedly Orthodox participant in the day-long program was appreciated. And I am grateful to Professor Paul L. Scham, the institute’s executive director, for inviting my participation. Especially since other parts of the day included a strident speech by the president of the New Israel Fund and what struck me as an attempt to upholster the deck chairs on a theological Titanic by the head of the American Reform movement.

On the panel, I attempted some humor to convince the audience that underneath my black suit (and sefirah-overgrown beard) was a normal human being. Then I made a serious case, that a connection to authentic Judaism empowers dedication to the Jewish presence in Eretz Yisrael – and that the demographics of the American Jewish community, which indicate a clear waning of non-Orthodox movements and a waxing of Orthodoxy, heralds a stronger pro-Israel future American Jewry.

And I took the opportunity to assert that the true preserver of the Jewish people, and the true ensurer of its integrity and unity is our mutual religious heritage.

In that context, I highlighted groups like Partners in Torah, and the way they non-judgmentally bond Jews through the study of traditional Jewish texts. I cited the example of my wife, who has for years studied weekly by phone with an intermarried Jewish woman in Arizona whom she has not yet met.

I knew I wouldn’t likely convince those present who were long invested in Reform or secular Jewish culture. But planting seeds, I learned from my years in chinuch, is always a worthy thing. Sometimes seedlings sprout down the line.

The best part of such conferences, though, is the opportunity they present to speak with Jews whom I would otherwise not likely ever meet. I cherish those chances to engage fellow Jews very different from me in friendly conversation. (And there’s always the amusement afforded by the reaction of the inevitable question about my college alma mater; when informed that I just managed to graduate high school and thereafter studied only in yeshivah, the questioner seems shocked that I speak English competently.)

The most memorable conversation I had at this particular conference was with a lady somewhat older than I and with a very serious demeanor who recounted an experience she had had over Pesach, on the street of a Florida city where she had spent the holiday.

She described how she went for a walk on the first day of Pesach, in clothing suited to the climate, and saw a man, whom she described as “a Satmar Chassid in a big fur hat,” coming toward her from the opposite direction.

My “justification mode” kicked right in and I prepared to explain to her how there are different norms in different communities, and that some Jewish men, out of tzenius concerns, don’t address women directly, and how, in other circumstances, surely, the gentleman would have acted differently…

It was worth all the time and shlep and speeches just to hear that account.