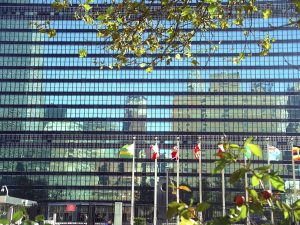 The countries that voted this morning in the United Nations General Assembly to demand that the U.S. rescind its recognition of Jerusalem as Israel’s capital and its plan to move its embassy there once again showed their true and ugly colors.

The General Assembly has long been a ludicrously anti-Israel forum, a grandiose soapbox where nations, including more than a few whose regimes routinely oppress, torture and murder their own citizens, wax righteously indignant at Israel’s audacity in defending herself against her many bloodthirsty enemies.

Today’s vote, however, forged a new low in the world body’s antipathy toward Israel.  Not only does the majority of the General Assembly seek to deprive Israel of the right to determine her own capital, but it seeks to prevent our own country from respecting that right.

In 1995, Congress passed a law explicitly establishing the position of the United States that “Jerusalem should be recognized as the capital of the State of Israel,” and requiring that the American Embassy in Israel be moved to Jerusalem.  Earlier this month, President Trump announced the implementation of that law.

We are proud of the steadfast friendship toward Israel and recognition of reality that Congress and President Trump have demonstrated.  We applaud President Trump and Ambassador Haley for their courageous articulation of American values in the lion’s den of the United Nations.

And we remain ever hopeful that other responsible nations will come to recognize the special status of Jerusalem not only to the state of Israel but to the Jewish people throughout the millennia.