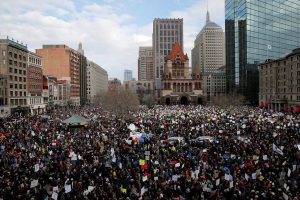 The fallout of what has most alarmed some about President Trump’s immigration executive order may turn out to be a blessing.

There are certainly reasons to question the order, which restricts immigration from seven countries, suspends refugee-admission for 120 days and bars all Syrian refugees indefinitely—and is, at this writing, halted by a federal court.

There are the humanitarian concerns that have been highlighted by much of the public and many media; and the fact that immigrants from problematic lands are already subject to very strict, multi-layered vetting procedures. And then there is the fact that no Americans have died as a result of terrorist acts in the U.S. by immigrants from any of the seven targeted nations.

What’s more, the blacklist doesn’t include Saudi Arabia, Egypt, the United Arab Emirates and Lebanon – the countries that yielded the 9/11 attackers.

But the most disquieting concern about the executive order was raised by, among others, former CIA Director and U.S. Defense Secretary Leon Panetta.

“We’ve fed ISIS a major argument,” he contended, “that I think will help them in recruiting, and that increases the chances of a potential attack in this country.”

He went on to explain that Islamic State operatives and recruiters will seize upon the president’s targeting of some Muslim-majority countries to make the case that the West is at war with the religion of Islam rather than with the scourge of terrorism, a contention that was strongly rejected by President George W. Bush and President Obama.

That fear of the executive order playing into terrorist hands resonates strongly with many, as it did with me in the days after the order was signed. Ensuing events, though, led me to a very different place.

One doesn’t have to harbor particularly positive feelings about the mass protests that came in the wake of the executive order to recognize their impressive magnitude: Almost immediately after the order’s signing, 10,000 protesters gathered in Manhattan’s Battery Park, another 10,000 in Boston’s Copley Square, thousands more in front of the White House, and many hundreds in major airports and city spaces across the nation. And protests persist to this writing.

I don’t like large noisy demonstrations, even in support of ideals like human rights. Mobs remind me of, well, other mobs, like those of the past and the present that were or are informed by things other than humanitarianism – things like animus for the West, for Israel, for Jews. They are ugly organisms, amalgams of evil individuals bound together by hatred. Even the innocuous roar of citizens protesting some insult to the environment or new regulation, a sound that occasionally rises 13 floors to my office in lower Manhattan, makes me shiver.

Maybe it’s in my genes, or the residue of some vicarious memory of what my father, hareni kapparas mishkavo, recounted to me about how the Jews in his Polish town in the 1930s had to stay inside and lock their doors as Pesach approached, when groups of marauding churchgoers, spurred by angry sermons they had heard, would move down the streets looking for Jews to attack.

Still and all, aside from the inevitable anarchists and rabble-rousers dedicated to nothing more than anarchy and rabble-rousing, many – I suspect most – of the protesters of the president’s order were people of sincere good will expressing sincere concern for other people, of other religions and nationalities, and for refugees fleeing persecution or war-torn lands.

What I came to realize was that the sight of such mass protests can’t have been entirely lost on the Muslim “street.” There might, in other words, be a silver lining to the immigration order kerfuffle in the vocal opposition (justified or not) it elicited from a broad swath of American citizens.

I imagine an Islamic State recruiter trying to convince a confused Arab or African teenager seeking some “higher” calling to join a terrorist cell targeting Americans. “Trump, that kufr!” Malevolent Mohammed rails at his charge. “He hates ‘the prophet,’ hates Islam!” But the boy has seen images (these days, even dusty desert villages are “on the grid”) of American citizens – the very people he is being urged to murder – standing up for Muslims. It’s got to at least confuse the kid.

Some readers (probably many) will see an overactive imagination here. But there have indeed been Muslim extremists who, exposed to unexpected Western good will, have turned their lives around. Is it irrational to hope that the reaction to the recent presidential order might serve to help others do the same?

Maybe only a few will be impressed, and there will always be bad people. But every ex-terrorist-wannabe counts.