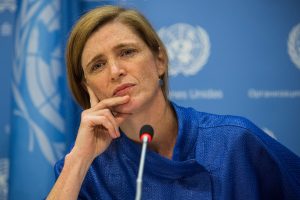 Samantha Power first burst into public consciousness as the author of A Problem from Hell: America and the Age of Genocide, a series of case studies chronicling the virtual acquiescence American policymakers in mass slaughter — from the Armenians at the hands of the Turks to the Holocaust to Rwanda — and the elaborate justifications offered for doing nothing. The book grew out of her experiences as a war correspondent in the Balkans observing the ethnic-cleansing of Srebrenica and Kosovo.

Her outburst at the United Nations Security Council on December 13 against the Russians for their lead role in the mass civilian casualties in Aleppo was thus fully in keeping with her passionate academic work. “Are you truly incapable of shame? Is there literally nothing that can shame you?” Power challenged the Russian UN ambassador, teary-eyed and voice-quivering.

The only problem with her denunciation is that Ms. Power is the public face of a U.S. administration that might as well have been using her own work as handbook for justifying inaction. Those justifications have constantly shifted from 2006. First, President Obama confidently predicted that Assad would fall without U.S. intervention. Later he dismissed opposition forces as a ragtag group of “doctors and lawyers” who had no chance of defeating Assad’s army.

The president threatened Assad not to cross his “red-lines” and employ chemical weapons against civilians. Assad called his bluff. When ISIS first arose, Obama dismissed it as the “JV team.” Subsequently, the ISIS threat was deemed so overwhelming that it justified allying with Russia and Iran to defeat it. Yet Sunni ISIS drew most of its initial support from the fact that Sunnis felt themselves to have been abandoned by Obama to the tender mercies of Assad and Iranian-backed Hezbollah.

“Between action and inaction, the administration chose inconsequential action [– i.e., actions] certain not to effect the outcome,” charges Leon Wieseltier. Even a non-fly zone, such as that enforced to protect Kurds and Shias from Saddam Hussein’s revenge after the first Gulf War, was more than Obama would countenance.

Nor was Obama’s passivity just a matter of apathy to the death of half a million human beings and eleven million more turned into refugees. It was a direct consequence of Obama’s primary foreign policy goal – reaching a nuclear agreement with Iran and rapprochement between the United States and the mullahs. Iran let the Obama administration understand that any talks were contingent on American non-intervention in Syria, and Obama chose to recognize the Iranian “equities” in Syria and the survival of its ally Assad All the shifting justifications afterwards were just more of Ben Rhodes’ messaging into the media echo chamber.

How ironic, then, that Iran, Russia and Turkey recently informed Secretary of State Kerry, that U.S. participation would neither be required nor welcome at their tripartite discussions on the future of Syria. There is nothing that Putin enjoys more than rubbing Obama’s nose in his own impotence and irrelevance.

NO WONDER MS. POWER wept in denouncing the Russian atrocities in Aleppo: She had become the accomplice to genocide she once decried. What a relief it must have been for her to return to the more traditional diplomatic role of being an “honest person sent to lie for one’s country” in announcing the U.S. abstention on Security Council Resolution 2334.

Power began offering, as a sop to Israel, a denunciation of the body’s consistent discrimination against Israel and obsession with it. Members, she noted, “summon the will to act only when it comes to Israel,” a clear reference to the Security Council’s inability to stop the slaughter of Sunni Muslims in Aleppo by Russian, Iranian, and Assad forces.

She then proceeded to lend a hand to the most momentous act of anti-Israel discrimination ever by the UN – one that by labelling all Israeli settlement beyond the 1949 armistice lines, including in Jerusalem, flagrantly illegal will breathe new life into the international BDS movement, make life miserable for Jews — or at least that dwindling percentage of Jews who still support Israel — on university campuses, and create the potential for Israeli political and military figures and citizen living beyond the 1949 armistice lines, to be hounded as violators of internantional law any time they set foot outside of Israel.

The U.S. abstention, Power claimed, was consistent with long-standing U.S. policy. Not true. It was not even consistent with the Obama administration’s own policy. Then U.N. ambassador Susan Rice vetoed a similar resolution in 2011 on the grounds that it “could encourage parties to avoid negotiations.”

Numerous U.S. administrations have urged Israel to freeze settlement activity in Judea and Samaria. But none have deemed that activity en toto illegal under international law. Security Council Resolution 242, the basis of all subsequent Middle East peacemaking, specifically contemplates the return of “territories” captured in the 1967 War, not “all” territories or “the” territories. And it refers to the right of each country in the region to live within “secure and recognized borders free from threats or acts of force.”

That wording was precise and deliberate. No one contemplated in 1967 that Israel would or should ever return its holiest sites. And the Joint Chiefs of Staff made clear to President Lyndon Johnson that Israel had been indefensible prior to its lightning victory in 1967 and it should not be pressured to commit national suicide by returning to those borders – aptly named by Abba Eban as the “Auschwitz borders.”

In 1994, the U.N. ambassador Madelaine Albright announced that the U.S. would veto any resolution labelling Israeli settlement activity as illegal under international law on the grounds that the issue of sovereignty over the West Bank was a matter that could only be determined through negotiation.

Finally, in April 2004, President George W. Bush provided Prime Minister Ariel Sharon with a letter making clear that any final settlement must be take into account changes on the ground in the nearly forty years since the 1967 War, including the creation of large Israeli settlement blocs and the transformation of Jerusalem. True, the Obama administration refused to recognize that letter or its conclusions from day one, even as applied to Jerusalem. But in doing so it was departing from the policy determinations of the previous administration, not upholding them.

Prior to 1967, there was no internationally recognized sovereign in the West Bank or East Jerusalem, and certainly no Palestinian state whose lands could be occupied. Under the League of Nations mandate, which created a homeland for the Jewish people in the area to the West of the Jordan River, and which was subsequently incorporated in Article 80 of the U.N. Charter, Israel has by far the best claim of any nation to the West Bank.

But for Power, delegitimizing Israel’s existence must have been a welcome diversion from thinking about Aleppo and the moral bankruptcy of the administration whom she serves.