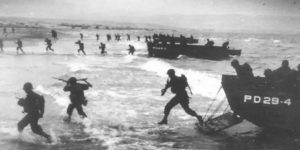 I just completed the week of mourning for my dear father, Rabbi Simcha Bunim Shafran, hareni kapparas mishkavo, who passed away last Tuesday. He left this world surrounded by progeny and students from Yeshivas Ner Yisrael, on whose campus he lived, with my brother and his family, over recent months.

I hope to write about my father, as I have in the past, in the near future as well.

May all the news we have to share be good tidings, like the birth yesterday of a new child, a boy, to our beloved daughter-in-law Leah Gittel Shafran and our esteemed son, Rabbi Mordechai Shafran, in Baltimore. Baruch Hashem.

My Hamodia column of last week is below:

On June 5, 1944, Erwin Rommel, the greatest German general of World War II, left occupied France to return to Germany for his wife’s birthday the next day. He was expecting an American invasion of Northern France, but a storm in the region, and the chief German meteorologist’s prediction that the weather would not be changing soon, led him to conclude that an invasion was not imminent.

Mrs. Rommel’s birthday is, of course, more remembered by history as D-Day, when American troops landed at Normandy, the largest seaborne invasion in history and the beginning of the liberation of German-occupied northwestern Europe from Nazi control.

The following year, when U.S. President Harry Truman, British Prime Minister Winston Churchill and Soviet Premier Joseph Stalin issued the Potsdam Declaration, an ultimatum calling for the Japanese to surrender, a questionable translation of a Japanese word in Japan’s response may have led to the atomic bombings of Hiroshima and Nagasaki.

A translator rendered mokusatsu – which literally means “kill with silence” and may have been intended to signal a simple reluctance for the moment to respond – as “reject.” President Truman took Japan’s reply as a statement of defiance, and ordered the bombings that took the lives of an estimated 200,000 people, half of them after months of agony.

More than thirty years earlier, the Titanic sunk, and more than 1500 people drowned in the North Atlantic Ocean. Ship lookout Fred Fleet, who survived the disaster, told the official inquiry into the tragedy that had he had binoculars, he would have spied the iceberg that sank the ocean liner in time to avoid it. Binoculars had in fact been on board, but were in a locked cupboard. The ship’s former Second Officer, David Blair, who had been removed from the ship before it sailed, neglected to leave the key with his replacement.

A birthday party, a mistranslated word, a missing key – each proved momentously consequential.

As did, more recently, a click on a computer keyboard. The consequences were not – at least as far as we know now – as momentous as the party, word or key. But history may have been changed by the click all the same.

Back in March, Clinton campaign chief John Podesta received an email warning, ostensibly from Google, informing him that someone “just used your password to try to sign into your Google account.” The message continued: “Google stopped this sign-in attempt. You should change your password immediately.”

An aide, suspicious of the message, sent it to a Clinton campaign computer technician to check it out.

“This is a legitimate email,” the aide, Charles Delavan, replied. “John needs to change his password immediately.”

And with a subsequent click on the “Google” message, a decade of emails that Mr. Podesta maintained in his personal account — a total of about 60,000 — were unlocked for the use of possible Russian hackers. Mr. Delavan, in an interview, said that his bad advice was a result of a typo: He knew this was a “phishing” attack, an attempt to fool the recipient into allowing access to his account. He had meant, he said, to type that it was an “illegitimate” email or that it was “not legitimate.”

Whether the pilfered emails, which included embarrassing exchanges about various people and things, played a truly pivotal role in eroding Mrs. Clinton’s apparent lead during the weeks before the election cannot be known. But that they drew great and negative attention isn’t disputable.

And neither is the truism that historical happenings can hang on what seem trivial, almost random, things. To some people, that is just evidence of the folly of the cosmos, the meaninglessness of life. To those of us, though, who realize that human life and history have ultimate meaning, and that a Divine hand guides both our personal lives and the collective one of the world, such “trivialities” are not trivial at all.

We tend sometimes to lose ourselves in the turmoil of our hishtadluyos, the efforts we make, as we are enjoined to do, to effect desired outcomes – personal, communal, political. And we begin to think, in the backs of our minds (or, worse, even in their fronts) that our actions per se directly bring about the results that follow. It is that sort of imagining that fuels the wild passions some exhibit about politics.

An antidote to that misguided magical thinking, a reminder of Who is always ultimately in charge, consists of contemplating just how easily the world can change through no intentional action of our own, or of any mortal.