Living Under the Reign of Antiochus: A Response to Dr. Aaron Koller 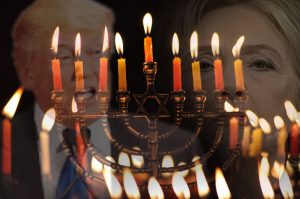 This article originally appeared in Times of Israel.

Dr. Aaron Koller’s essay, Living under the reign of Ahashverosh, is of great interest – not only politically, but religiously as well — for Dr. Koller asserts that the Biblical story of Purim was not a miracle and was instead the product of wise maneuvering through a lucky set of circumstances:

In Esther, no God intervened, and in a sense, none was needed. Through political maneuvering, good fortune, and careful planning, the minority was able to assert its presence and defend its rights. It should be added that the next administration enthusiastically supported minority rights (see Nehemiah 1).

Coming from someone who identifies himself as Orthodox, these words are clearly quite problematic.

Dr. Koller paints a modern-day Purim picture of Jews living under a government whose foolish and hedonistic leader is swayed toward Jew hatred by an evil adviser, until salvation arrives and a new government of religious tolerance takes over. As we say in Hebrew, “ha’mavin yavin“.

As Jews committed to our tradition and broad thinking, let’s try to imagine an alternative narrative, occurring as a contemporary version of the story of Chanukah, a la Dr. Koller’s presentation:

The Jews, who live in security and many of whom are steadfastly devoted to their faith, practicing it with the blessings of religious freedom, are now physically endangered and are ordered by government decree to compromise their religious principles.

Under this new and oppressive state of affairs, Orthodox rabbis and synagogues must perform and accommodate homosexual weddings upon demand or face lawsuits and legal censure, as the highest court in the land, whose balance of power has just been altered, stripped religious functionaries and institutions of protections to maintain faith-based policies that may be perceived by non-practitioners as discriminatory. Such protections were already ruled as unconstitutional as regards private businesses, such as bakeries and florists, which decline to accommodate “non-traditional” weddings, and which may thus be harshly penalized or shut down for non-accommodation. Hundreds of thousands of people who may very well be sympathetic to militant Islam and anti-Semitism are now pouring into Jewish population centers around the nation, and Jews with relatives in the Land of Israel are in a state of panic, for a powerful neighboring terrorist country that poses an existential threat to the Holy Land and to surrounding states is intent on rapidly building an arsenal of nuclear weapons as soon as a 10-year period of restraint terminates, with this terrorist country’s leaders having many times articulated their intent to obliterate the Jews of the Land of Israel.

The above perils to Jewish practice, safety and life are wrought at the hands of a political leader who has been implicated in dozens of scandals involving criminal corruption, whose political party has grown increasingly inimical toward Jewish government policies and leadership in the Land of Israel, whose foundation is under current investigation for various illegal dealings, and whose closest confidant/spouse was impeached from office for crimes of perjury and obstruction of justice. (This confidant, who is viewed as a national hero by the leader’s supporters, also committed acts of moral turpitude while in office and is alleged to have done so on numerous other occasions as well, and was disbarred from the practice of law in his own state and fined by his state’s bar association.)

Furthermore, the leader’s primary policy advisor and most powerful and influential aide is said to have family ties and old personal connections with Islamic radicals. And email leaks from the leader’s support team revealed further corruption and deceipt, as well as racist and bigoted private remarks by the leader.

The leader, who is considered by many to have blood on her hands due to the deaths of four of her own countrymen whom she refused to protect from Islamic militants in Libya, and who has been suspected of involvement in the deaths of numerous former confidants and adversaries, is believed to be wont to sell out her country and her people to the highest bidder, including heads of antagonistic nations who despise her countrymen yet who donated to her foundation and were then granted audiences with the leader. The leader is known to speak out of both sides of her mouth, and she has now again failed to provide the most basic security and meaningful assurances to her subjects, as she lobbies for a massive influx of populations that may cultivate and harbor terrorists.

The country’s Jews looked across the ocean to their brethren in France, who have suffered an untold number of terror attacks by homegrown Islamic militants living among France’s large Middle Eastern populations. The country’s Jews believe that, like their counterparts in France, they will be faced with frequent hostility and will be targeted with threats of physical attack should they wear yarmulkes in public or read from Hebrew Scriptures and prayer books while riding mass transit, as they will soon face an influx of hundreds of thousands of people from cultures known to breed hatred of Jews. Like the Jews of France, the Jews in our story are now terribly fearful for the safety of worshipers at synagogues and students at Jewish schools.

The Jews despaired, for their country’s leader sold out to their enemies for self-enrichment, fame and an ideology of tolerance before safety, and she sacrificed the nation’s religious rights on the great altar of pluralism. Furthermore, and above all, the Jews are not able to trust the leader, whose positions appear to change at a whim based on factors of personal enrichment and special deals.

But God heard the prayers of those Jews who were steadfastly devoted to Him and who proudly upheld their Mosaic traditions in the face of societal pressure and political correctness, and God sent a new leader, who will appoint a judiciary that protects the religious rights of practicing Jews and of all people of faith, and who will prevent a mass influx of large populations that may potentially harbor emissaries of militant Islam, and who will stop the antagonistic neighbor of those in the Holy Land from ever developing weapons of mass destruction. Against all odds – with far less funding and a much smaller staff than the aforementioned political leader, and in the face of government agencies and the mass media vigorously supporting the aforementioned leader and providing her with special protection and preferential treatment – did the new leader nonetheless ascend to power. It was a miracle of “the mightier being defeated by the weaker, the more numerous falling to the less numerous…”

The Jews breathed a sigh of relief, as the new leader pledged to provide security and to take principled stands, rather than pursuing a hazardous social/ideological agenda and following the money, as had been the practice of the now-defeated leader.

There are often many ways to look at something, and for the masses who voted for Donald Trump, the above Chanukah-themed scenario makes just as much sense as the modern-day Purim tale of Dr. Koller.

Although I am not by nature a Trump Republican, and I voted for a different candidate in the Republican primary, I share with so many other Jewish and non-Jewish Americans a sigh of relief and a feeling of satisfaction and thanksgiving that Mr. Trump won the general election.

My vote for Mr. Trump over Mrs. Clinton n the general election was not a reflection of these candidates’ personal merits, dispositions, or “likeability”. I knew that I was not voting for Rosh Yeshiva or Chief Rebbetzin. Rather, I voted solely on the issues: combatting terror, protecting religious rights and traditional values, building the economy, fighting crime, and, for me, the security of the State of Israel.

In a deep, brilliant shiur about Purim, Rav Yosef B. Soloveitchik zt”l addressed the issue of societies that lack religious/moral principles and boundaries:

The hedonic society is, more or less, a democratic Western society, in pursuit of pleasure and happiness. That society’s world philosophy and outlook can be broken into a number of component parts. This democratic society is in pursuit of pleasure, insists on minimum government interference in private life, resents controls, demands unrestricted freedom in matters which do not affect the community, particularly, maters of sexual morality, hates discipline imposed from above, not even by teachers, is opposed to any constriction…

…There is also another society. There is another path which human beings take in order to escape from the finiteness awareness and in order to engage in self-defeat, not only in an illusion but simply in a delusion. The second path, along which frightened man runs in his wild flight from finiteness and death, leads in the opposite direction… Man, traveling along the second path, tries to calm the fear of finiteness through a big lie, through convincing himself that he is more than man. This is done by intentionally magnifying, a hundred fold, and exaggerating and lying about human ability and power to solve both scientific and metaphysical problems of humanity, and by painting, in iridescent colors, the eschatological age which should be brought about by man alone, through his wisdom and creative efforts.

Then something happens… By idolizing man and setting him up as a deity, it inevitably leads to the formation of idolatrous cults, from time to time, like the cult of Stalin… Society, mankind, humanity is idolized, defined and set up as the omnipotent deity… The idol is the class, not the individual… In the name of some man-made doctrine or code, they appeal for sacrifices… Arrogant man becomes a tyrant, and the arrogant society which he establishes turns into a tyrannical society.

As a rule, orgiastic society eventually succumbs to a tyrannical, arrogant society…Orgiastic man overemphasizes the importance of freedom. He simply lacks the courage, the vision, to have the power of anticipation. He lacks the predictive element in history. He does not experience history, since he just lives for the present. Little by little, his power is eroded, and he is replaced by the irrational (tyrannical) man.

The Rav proceeds to explain that Shushan was the seat of orgiastic society, drunken with unbounded enjoyment and self-gratification. Hence does the story of Esther give exceptional attention to the ornate furnishings of the palace of Achashverosh, the detailed cosmetics regimen of the women, the eunuchs of the king’s harem, and so forth, so as to portray Shushan as the apex of indulgence in pleasure and hedone.

I fear to ponder what can eventually happen to American society, originally structured by some sense of Biblical values, yet moving over the past many years toward becoming the embodiment of unbridled permissiveness, along with dire failure to take principled stands. While tyranny does not appear to be on the specter, a collapse of the values that have sustained American society, and their replacement with trends of self-gratification and tolerance of everything, do not portend the positive. Under such a state of affairs, tyranny may be a long-term eventuality, God forbid – be it government-imposed tyranny, or, more likely, tyranny on the part of third parties, such as terrorists, in the face of a weak government that is too fearful to be “judgmental” and act decisively and effectively to protect its people.

Jews, and all citizens of America, should strive to restore traditional values to society, and should realize the risk to safety and the threat of terror that lurks around the corner and seeks to overtake us, should we not be vigilant and take action, including by electing those who will face the challenges and not hold off due to political correctness. May God protect us all.