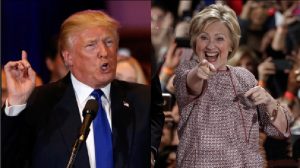 To the great surprise of no one, I expect to pull the lever (which is to say, press the electronic button) for Trump. I have a set of reasons for so doing: his support for Israel, his [or, more accurately, his advisors’] economic and foreign policies, and whether the Supreme Court will be populated by justices bent upon determining if legislation is Constitutional, or by justices bent upon changing the law to conform to their own opinions. [As we have seen, justices of the latter variety are far more dangerous to religious communities of all types.]

But what I’ve noticed is that no matter which candidate you support, someone is going to tell you that it is religiously untenable to do so, and that it completely contradicts any claim you might have to being a moral, much less religious, person. The conversation all-too-often turns to direct attacks… and not against the candidate or the candidate’s positions, but at the other party in the discussion. All of these are direct quotes from online comments:

If you support Trump, it’s a “shanda” because you are supporting a “neo-fascist,” a “Nazi” guilty of a host of crimes. You are “attacking Judaism” and, of course, “promoting anti-Semitism.” Orthodox supporters in particular must be racists motivated by “deep resentment… against black folks for their total lack of gratitude or even conscious recognition” of Jewish support for civil rights.

If you support Clinton, you are an “un-kosher Rabbi” who endorses “an anti-Israel Treif candidate for President… with the Chazzer Feesel Clinton.” If Rabbi Menachem Genack of the OU supports Clinton, “can we now trust the OU on kashrus?”

If I seem to have more anti-Trump material, this is true. As Scott Adams of Dilbert fame points out, Clinton supporters are more likely to steal the sign off your lawn, deface your bumper sticker, or accuse you of racism and hate speech. They are more prone to use insults and labels on social media. [The anti-Clinton examples above come from a single individual.]

But my point is that it is equally inappropriate on any side, especially coming from a frum person.

Is there an exemption from the obligation to be Dan L’Kaf Zechus, to judge every person favorably, because there’s an election campaign going on? If you are incapable of seeing why a rational, intelligent, Torah-observant individual might have completely rational reasons for supporting both candidates, the problem lies within you, not the target of your ire.

Certainly, there are serious issues involved. But in the end we know Lev Melachim B’Yad Hashem, that “The heart of a king is like a stream of water in the hand of Hashem, wherever He wishes, He will direct it.” [Proverbs 21:1]

Life and civilization will go on. Yes, elections address important issues, but a blatt Gemara addresses more important issues. And somehow we manage to fight over the latter while building friendship rather than enmity. It should be that way with every argument!