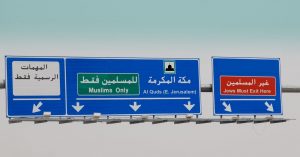 Yes, yes, I get it. “Ethnic cleansing” conjures images of Nazi expulsions and murders of Jews, or the 1990s Bosnian war, when Serb and Croat forces intimidated, forcibly expelled or massacred one another to ensure Serb-free or Croat-free territories.

But, like many charged terms, the expression has come to be applied as well to more benign, but still pernicious, attempts to remove populations from areas where they have lived for years, in the interest of creating a mono-ethnic state.

And that is precisely how Israeli Prime Minister Benjamin Netanyahu used the term when noting that Palestinian leaders envision a Jew-free Palestinian state. As recently as 2013, Palestinian Authority president Mahmoud Abbas said in Cairo that, “In a final resolution, we would not see the presence of a single Israeli – civilian or soldier – on our lands.”

Israel, Mr. Netanyahu reminded viewers of the brief video in which he made his comment, has nearly two million Arabs living inside its borders, while the Palestinian leadership “demands a Palestinian state with one pre-condition: no Jews.”

“There’s a phrase for that,” he continued, “It’s called ethnic cleansing. And this demand is outrageous.”

“It’s even more outrageous,” he added, “that the world doesn’t find this outrageous.”

The loud, wild howling you may have heard in the wake of the video’s release was the reaction of much of the world to that observation of the Palestinian emperor’s new (and old) clothes.

Unsurprising were Palestinian and other Arab expressions of anger over the suggestion that it was somehow impolite to insist that Jews finding themselves in a future Palestinian state be forcibly removed.

And only slightly less surprising was U.N. Secretary General Ban-Ki Moon’s pronouncement that the Israeli leader’s remarks were “unacceptable and outrageous.”

Even ADL head Jonathan Greenblatt was critical of the “ethnic cleansing” remark. “Israel has many legitimate concerns about Palestinian policies and behavior,” he wrote, “However, the charge that the Palestinians seek ‘ethnic cleansing’ of settlers is just not one of them.” He didn’t, however, explain why it wasn’t.

Disturbing too was the fact that the U.S. State Department joined the chorus of lamentations. Spokeswoman Elizabeth Trudeau responded to a question at a press conference by saying that “We obviously strongly disagree with the characterization that those who oppose settlement activity or view it as an obstacle to peace are somehow calling for ethnic cleansing of Jews from the West Bank.”

Even those who believe in the wisdom (or just the inevitability) of an eventual “two state solution” to the Israel-Palestinian conflict, even if they believe that Mr. Netanyahu was imprudent to have used the loaded phrase, have to admit that, all said and done, it wasn’t inapt.

If you read this column regularly, you know that I am not among the relentless critics of the Obama administration. I feel that the president has been, in concrete actions, as supportive of Israel (if not some of the Netanyahu government’s policies) as any American leader, if not more so. And in fact, not long after the Netanyahu video contretemps, the American administration reached agreement with Israel on a 10-year Memorandum of Understanding that constitutes the single largest pledge of military assistance in U.S. history, totaling $38 billion over 10 years, including $33 billion in Foreign Military Financing funds and an additional $5 billion in missile defense funding.

Even Mr. Netanyahu, despite having asked for yet more (the shuk doesn’t stop at Machaneh Yehudah), was clearly satisfied with the agreement. He could have declined to sign it until after a new administration takes office in three months, but apparently felt that he was better off in Mr. Obama’s hands than in those of his successor.

But my feeling that too many of us view the Obama administration with grossly jaundiced eyes doesn’t mean that there aren’t times when it is deserving of criticism; this is one of them. Even if it views settlements in Yehudah and Shomron as “obstacles” to peace (and the expansion of at least some arguably are), the administration was misguided to regard Mr. Netanyahu’s words as unhelpful. They were very helpful.

If only because they discomfited so many, forcing them to fidget as they tried to justify the unjustifiable: the removal from their homes of people of a certain ethnicity – not to mention one whose members, over the course of history, were exiled repeatedly and callously by a long parade of tyrants, dictators and thugs.