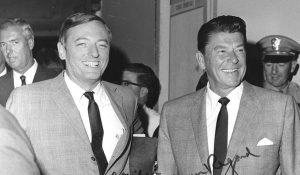 If the phrase “alt-right” puts you in mind of a computer keyboard, you are (blessedly) not following the presidential campaign.

Even if you are aware of the phrase, though, you may not have a good handle on what it means. For good reason. Many don’t. It’s a hazy phrase.

The term, which is shorthand for “alternative right,” has been in circulation for several years, but it enjoyed a recent moment in a particularly bright spotlight when presidential candidate Clinton, in a speech, sought to make a distinction between mainstream Republicans and what she characterized as holders of a “racist ideology,” i.e. the “alt-right,” who she says are a major base of support for her opponent.

The “alt-right” movement – if it can even be given a label implying some unifying philosophy – means different things to different people, as it includes disparate elements.

What those elements generally share is a dedication to family values; a reverence for Western civilization and rejection of multiculturalism; an embrace of “racialism,” the idea that different ethnicities exhibit different characteristics and are best segregated from one another; and, consonant with that latter credo, opposition to immigration, both legal and illegal.

Mrs. Clinton referenced the alt-right because her rival Donald Trump recently named a new campaign chief, Stephen Bannon, the former executive chairman of Breitbart News, a conservative website some have associated with the group.

The alt-right’s “intellectual godfather,” in many eyes, is Jared Taylor. Although he characterizes himself as a “white advocate,” he strongly rejects being labeled racist, contending that his “racialism” is “moderate and commonsensical,” a benign form of belief in the “natural” separation of races and nationalities. He contends that white people promoting their own racial interests is no different than other ethnic groups promoting theirs. He has said, “I want my grandchildren to look like my grandparents. I don’t want them to look like Anwar Sadat or Fu Manchu.”

Pointing to the homogeneity of places of worship, schools and neighborhoods, he insists that people “if left to themselves, will generally sort themselves out by race.”

Certain of Mr. Taylor’s beliefs may resonate with some Orthodox Jews. We may rightly eschew racism (seeing black Jews, for instance, no different from white ones), but we tend to be less than enamored of some elements of various minority cultures; we deeply value ethnic cohesion, preferring to live in neighborhoods among “our own kind”; and we have serious problems with certain elements of “progressive” western civilization and multiculturalism.

Mr. Taylor, in fact, welcomes Jews. He has said that we “look white to him.”

That sentiment though, is not typical among others under the alt-right umbrella.

Even a nuanced rejection of non-western cultures inevitably attracts genuine racists and haters, and devolves into rejection of the eternal “other”: Jews. The American far right has always embraced, inter alia, one or another form of Jew-hatred. More balanced members of the alt-right refer to their “1488ers” – a reference to two well-known neo-Nazi slogans, the “14 Words” in the sentence “We Must Secure The Existence Of Our People And A Future For White Children”; and the number 88, referring to “H,” the eighth letter of the alphabet, doubled and coding for “Heil Hitler.”

And even Mr. Taylor has permitted people like Don Black, a former Klan leader who runs the neo-Nazi Stormfront.org web forum, to attend his conferences. He may or may not endorse Black’s every attitude, but neither has he rejected his support.

Back in the 1960s, the John Birch Society, then dedicated to the theory that the U.S. government was controlled by communists, was condemned by the ADL for contributing to anti-Semitism and selling anti-Semitic literature. The brilliant and erudite William F. Buckley Jr., the unarguable conscience of conservatism at the time, recognized the group’s nature, and the threat its extremism posed to responsible social conservatives. In the magazine he founded, National Review, he denounced and distanced himself from the Birchers in no uncertain terms, contending that “love of truth and country call[s] for the firm rejection” of the group.

It is ironic that it has fallen to the Democratic presidential contender to make a distinction between responsible Republicanism and the current loose confederacy that includes haters.

In the wake of Buckley’s denunciation of the alt-righters of the time, some National Review subscribers angrily cancelled their subscriptions. Others, though, were appreciative of Buckley’s stance. One wrote: “You have once again given a voice to the conscience of conservatism.”

That letter was signed “Ronald Reagan.”