Pursuing Peace and Straightening the Record 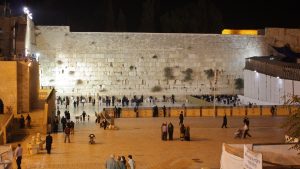 The recent op-ed by Yair Sheleg, “Israel’s battle for peace between religion and state,” is troublesome in several ways. While he portrays himself as a dispassionate analyst, it is clear that Sheleg’s essay intends, on the contrary, to inflame passions—and he is not above inverting the record in order to do so.

The editor’s note added by JNS.org is revealing. In lieu of “haredi,” the writer used the pejorative term “ultra-Orthodox,” prompting this editorial disclaimer. In an era when we express sensitivity and consideration towards minority populations, we allow them to choose the terms of their own identity and avoid negative bias. The writer affords the haredi community no such consideration, using a modifier, “ultra-,” that is universally negative when used to describe a movement or community. The Israel Democracy Institute claims to be nonpartisan; the director of its Religion and State program belies that, at least with regards to Jewish religious affairs.

Second, the premise of the op-ed directly contradicts Sheleg’s statement to the media, made in his professional capacity. His opinion piece claims that “the ultra-Orthodox have launched a new offensive;” speaking to the New York Jewish Week, however, he noted that “the ultra-Orthodox are in a defensive position” (our emphasis added), merely wishing to preserve the status quo that has governed Israeli practice since its founding.

In this case, the pejorative term “ultra-” is both offensive and inaccurate. Consider our own example. One of us holds a doctorate in not-for-profit organization systems, and served as executive vice president of the national Young Israel movement for more than 25 years. The other earned a BSE in computer science from Princeton University, architects a family of prominent Jewish websites, and, not incidentally, identified with the Conservative movement into adulthood. Both of us live in the United States, where we frequently interact with Reform and Conservative leaders and members both personally and professionally. Neither of us exemplifies the stereotypical image evoked by the term “ultra-Orthodox.” Groups like Women For the Wall, the women’s group acting to preserve traditional practice at the Western Wall, are certainly not led by “ultra-Orthodox.”

The vast majority of religious nationalist leaders and members all strongly oppose the changes advocated by Sheleg—and, given his position, he is surely well aware of this. Thus the “ultra-” label is not merely pejorative, but a facile attempt to reframe the conversation to avoid the real issues.

Why are the American liberal movements pushing for major changes at the Western Wall at this time? The question gains potency given a demonstrated lack of need. More than a decade ago, these movements were allocated space at the Robinson’s Arch section of the Kotel; three years ago, then-Religious Affairs Minister Naftali Bennett unveiled a new, greatly expanded “Ezrat Yisrael” platform in response to demands from these same movements.

Since that time, this space has never been filled. Not once. Most of the time it sits completely empty; only when the Sephardic chief rabbi of Jerusalem, former Sephardic Chief Rabbi of Israel Rav Shlomo Amar, conducted a private service there did the leaders of these movements respond with possessive outrage.

To anyone with even minimal knowledge of the differences in belief and practice of traditional and non-traditional Jews, the reasons for the disuse of Ezrat Yisrael are not difficult to discern. Neither movement prays for the restoration of the Holy Temple upon the Temple Mount, and the overwhelming majority of liberal Jews do not pray daily at all. They are not coming on aliyah, neither are Israelis interested in their revisions of Judaism—there are less than 100 liberal congregations in all of Israel, serving less than 0.4 percent of the Jewish population.

Liberal leaders themselves acknowledge that they are demanding the government spend millions of dollars and irrevocably compromise archaeological sites simply for “recognition.” If so, one must ask why they are willing to disrupt the attitude of American Jews towards Israel in order to make these demands at this time.

Recent Pew Research Center surveys provide the answer: the American liberal movements are collapsing here in their North American home. They claim to represent the dominant voice of American Jewry; certainly, they must accept primary responsibility for the 70-percent intermarriage rate among non-Orthodox Jews, and the failure of the plurality of Jews under age 50 to identify with any Jewish denomination. Only 25 percent of American Jews are members of a Reform or Conservative congregation, and their median age is 55. They have lost the next American-Jewish generation.

Why are these movements spending an inordinate amount of time and money to change Judaism in Israel, rather than educating and influencing their youth, working to guarantee that their grandchildren care about Judaism? If they truly care about the Jewish future, they will not besmirch Israel with unfounded accusations of limitation on Jewish practice, but encourage their own to visit or even live there, and learn for themselves—both about Israel, and about Judaism.

This is all the more true when it comes to Sheleg’s second topic, the issue of Jewish conversion. The State of Israel adopted traditional standards to determine Jewish identity in order to preserve Jewish unity: so that the grandchildren of Orthodox and liberal Jews might marry without serious investigation of each individual’s Jewish heritage. The liberal movements have already necessitated this in America, with sometimes tragic consequences. Importing this to Israel will permanently divide the Jews of the Jewish state.

In the end, it is clear that Sheleg’s statement to the media is notably more accurate than his opinion piece: there is no “ultra-Orthodox offensive,” but rather an effort by liberal movements to enact drastic changes in Israel to draw attention away from their self-inflicted decimation at home in America. It is incumbent upon them not to try to change Israeli Jews in a way that draws them away from Jewish tradition, but to change American Jews in a way that draws them towards it. That should be, after all, the goal of any Jewish movement.

Rabbi Yaakov Menken is the director of Project Genesis – Torah.org, and the co-editor of Cross-Currents.com, an Orthodox online journal. Rabbi Pesach Lerner is the executive vice president emeritus of the National Council of Young Israel.