The Power of a Place 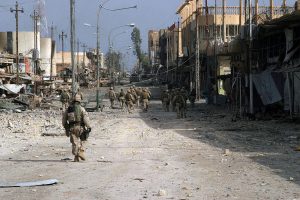 Somewhere on earth there may be a more fractious, violent, convulsed and combative place than the Iraqi city of Fallujah, west of Baghdad. But it’s not likely.

Currently, Fallujah is in the news because ISIS, which has controlled the town since 2014, is engaged there in a battle with Iraqi government forces, and has been shooting civilians who try to flee the conflict.

But carnage has long been the city’s calling-card. Sectarian strife between Sunnis and Shiites has raged for centuries. Fallujah was where, in 2004, Iraqi insurgents ambushed a convoy containing four American private military contractors, dragged them from their cars, beat them, set them on fire and dragged their charred bodies through the streets before hanging them from a bridge spanning the Euphrates River.

When U.S. troops left Iraq in December 2011, Fallujans celebrated and burned an American flag. In 2013, protests erupted again in Fallujah, this time against the Baghdad government. ISIS urged Sunnis to take up arms to fight Shiites, and, soon enough, Fallujah fell into the Islamic State’s claws.

Iraq, of course, includes the region that we know as Bavel. What many may not know, though, is that the name of the city called Fallujah, according to historians, comes from its Syriac name, Pallgutha, which (as in Gemara Aramaic) means “division” or “argument.”

And fascinatingly, the city is identified by a number of historians with Pumbedisa, one of the three Babylonian Torah-centers (the other being Neherda’a and Sura) where Amoraim recorded, examined and debated much of the Torah Sheb’al Peh that had been transmitted from generation to generation since Kabbalas HaTorah.

He addresses the perplexing intention of the builders of the Tower of Bavel, who joined together to build a structure whose top would “reach to the heavens” in order to “make for ourselves a name” – to in some way challenge, k’vayachol, Hakadosh Baruch Hu Himself, as the meforshim explain. How, Rav Charlop asks, could human beings ever be so foolish as to even consider opposing their omnipotent Creator?

In some unconscious sense, however, the Mei Marom suggests, the builders sensed that the spiritual essence of the land on which they lived permitted human beings to somehow prevail “against” Hashem. What they actually sensed, though, he explains, was the fact that the mesivta dirakia, the Heavenly beis medrash, would look to earth, especially to Bavel, for halachic decisions (Bava Metzia, 86a); that lo baShamayim hi, the “Torah is no longer in Heaven” (Bava Metziah, 59b). That, in the end, the Tanna’im and Amora’im’s majority decisions would determine halachah.

The tower-builders, suggests the Mei Marom, detected but misunderstood the power of their place. Yes, it held the seeds of the highest expression of human independence. But that fact was not destined to manifest itself for many hundreds of years, when Bavel would become the seat of the interpretations of the Amora’im. The builders sensed something true, but were deluded in their comprehension of it.

It’s interesting to note, too, that, middah k’negged middah, the seeds of the most mundane, crass discord were Divinely sown among them, in the form of different languages and the diverse perceptions that came as a result. The people, until then unified in their undertaking, came to disagree with one another, to argue, to fight, and, eventually, to disperse to lands far and wide.

When Jews were exiled to Bavel, however, kedushah imbued the atmosphere of conflict that permeated the land. Not only were halachos decided but even argument about them became sublime. Chazal engaged in disputes – holy, transcendent ones, over the fine points of the mesorah . Whereas, earlier, disagreement devolved into strife and violence, the chachamim of Bavel engaged in a different type of warfare: “milchamta shel Torah” – “the war of Torah.”

The war, in other words, that goes on in every beis medrash to this day. Talmidim lock mental horns, “fighting to the finish” with their minds. But the disputants, “waging war” as they do, are, in truth, amiable partners; their conflict is not personal but rather a joint venture in the cause of emes. As the Gemara puts it: “[Those who are involved in Torah-study] become like enemies to one another [when they engage in dialectic], but then become beloved friends” (Kiddushin, 30b).

So, as we witness the barbarism in Fallujah today, we might pause to imagine how the city once was, at least for a time, a place where strife was sublimated, and conflict rendered holy.