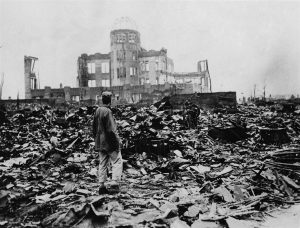 The saintly aura that has enveloped Ronald Reagan in the minds of many who consider themselves social conservatives and independent thinkers – and I count myself among them; and I voted for Reagan in both 1980 and 1984 – has eclipsed the memory of his infamous 1985 visit to the military cemetery in Bitburg, Germany. Elie Wiesel famously told Mr. Reagan, “That place, Mr. President, is not your place.”

Bitburg comes to mind in the wake of the announcement that President Obama will be visiting Peace Memorial Park in Hiroshima, Japan, more than 70 years after the United States dropped an atomic bomb on the city – and then, three days later, another, on Nagasaki – killing upward of 200,000 people and leaving unknown numbers with illnesses born of radiation exposure. Mr. Obama will be the first sitting president to visit the site, and is being criticized by some for his plan to do so.

The wisdom, propriety and necessity of President Harry Truman’s decision to unleash nuclear destruction on the Japanese cities on August 6 and August 9, 1945 have been debated for decades. Japan had attacked the U.S. first, at Pearl Harbor, had starved, beaten and executed American prisoners of war and seemed undeterred by Germany’s May 7 surrender to the Allies.

Truman maintained that the bombings, by accelerating the Japanese surrender, saved countless American lives. “The Japanese began the war from the air at Pearl Harbor,” he proclaimed. “They have been repaid many fold.” And the bombings had been ordered “in order to shorten the agony of war, in order to save the lives of thousands and thousands of young Americans.”

Some historians, however, have judged these decisions harshly, maintaining that there were other paths toward Japanese surrender, and that the loss of life at Hiroshima and Nagasaki was unconscionable.

For its part, the White House has stressed that the visit is not intended as an apology, but rather is a symbolic gesture to promote Mr. Obama’s nuclear nonproliferation message and highlight the reconciliation between wartime enemies that are now close allies.

Nonetheless, knee-jerk Obama-bashers and knee-jerk “progressives” alike have registered their respective disgruntlements. The former have long characterized the president’s acknowledgments of U.S. misjudgments as unwarranted and unpatriotic apologies; they claim that the president’s very presence at the site is an unspoken expression of regret. And the latter believe that the U.S. in fact does owe Japan an unqualified and open mea culpa for the bombings.

Thus, “The Obama Administration Is Now Apologizing For America Winning World War II” reads the title of an opinion piece by David Harsanyi, a senior editor at The Federalist. And “America’s enduring Hiroshima shame: Why Barack Obama should apologize for the atomic bomb — but won’t” is the title of an essay by syndicated columnist Jack Mirkinson.

The guy in the Oval Office just can’t win.

I don’t know if pediatricians apologize to toddlers for the pain they have inflicted on them after a required inoculation. But I can certainly imagine a sensitive doctor acknowledging his small patient’s pain, including his role in creating it, while seeking to soothe the child.

Is the Commander in Chief of the United States visiting Hiroshima really much different? Even if the optics indicate something more than a celebration of how far U.S-Japan relations have come over the past half-century, even if Mr. Obama’s presence at the site is seen as an expression of anguish at the great loss of life caused by our country’s nuclear attacks on Japan, even if one believes that President Truman was entirely right in his decisions, is it somehow un-American or reckless to be perceived as pained by the incineration of two cities’ populations?

Elie Wiesel was right about Bitburg. It was not, and is not, a place for an American president. It is a cemetery for a military that fought to advance the cause of an evil regime. But, even if the Japanese regime was contemptible too, those who perished in Hiroshima and Nagasaki were civilians.

Words from the end of Sefer Yonah come to mind:

“Now should I not take pity on Nineveh, the great city, in which there are many more than one hundred twenty thousand people who do not know their right hand from their left, and many animals as well?”