Elliot Abrams Wants You To Invite Bernie To Your Seder 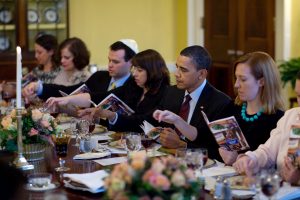 We get so caught up in the details of the seder that we can lose sight of its broader importance. When we gather bezras Hashem this Friday night, we will all orchestrate different types of sedorim. Some will be full of child-centered entertainment. Others will try to stimulate back-and-forth discussion. Yet others will have participants taking turns at sharing insights into the meaning of the Hagadah [If you are desperate, you can try my recent collection]. Some sedorim will home in on the events of the Exodus, following the Rambam. Some will follow an implicit directive of the Slonimer Rebbe zt”l to speak about anything that fine-tunes our emunah/ belief in Hashem.

All of these approaches are beautiful and important. Elliot Abram’s theme article for April in Mosaic, however, points to an overarching consideration of the seder evening that will look much bigger after reading it. The seder night is vital to the future of the Jewish people, as well as to the present security of the State of Israel. Abrams, who served in foreign policy positions for Presidents Ronald Reagan and George W Bush, does not explicity draw this conclusion, but I believe it follows. Here is the argument.

The article attempts to upend the conventional wisdom about growing white space opening up between American Jews and the Jewish State.

Everyone knows that American Jews and Israel are drifting apart—and everyone is confident of the reasons why. Israel, it is said, has become increasingly nationalistic and right-wing; “the occupation” violates liberal values; and the American Jewish “establishment,” with its old familiar defense organizations and their old familiar apologetics, has lost touch with young American Jews who are put off by outdated Zionist slogans and hoary appeals for communal solidarity.

Abrams reviews two recent books on the matter, and rejects most of the analyses of both of them, dismissing their diagnoses of problems and prescriptions of how to nurse the patient back to health.

The author rejects the contention that an ideological chasm has opened up between a new generation of American Jews uncomfortable with Israel’s irredentist policies:

Do American Jews really have “greater knowledge” about Israel today than did their parents or grandparents? Why would that be, and where did they acquire their balanced and penetrating insights—by reading theNew York Times? Is Israel really “increasingly illiberal”?

Likewise, he cannot accept the premise that until the ill-conceived policies of Bibi Netanyahu, American Jews uniformly lined up ideologically behind Jerusalem:

Concerns about exclusively Jewish problems and threats to Jewish communities abroad did not override, or sit comfortably with, the liberal and universalist impulses that remained powerful among American Jews. The American Jewish Committee (AJC) and other leading organizations had created a synthesis that was meant to substitute for Jewish parochialism. In this conception, the particular interests of Jews would be best protected not by tribalism, i.e., by focusing exclusively on fighting anti-Semitism and rescuing endangered Jews, but by creating a more just society, in which all forms of bigotry would be countered and destroyed, and by forging a world order built on peace, justice, and law…. During the 1960s, Barnett writes, the AJC’s American Jewish Year Book “often gave more prominence to the civil-rights movement than to Israel.” This cosmopolitan outlook was itself consonant with the “prophetic Judaism” that had long been the hallmark of the Reform movement; today, it is increasingly the religion of all non-Orthodox American Jews. Tikkun olam, “repairing the world” through action for “social justice,” is regarded by many American Jews as more important than actually observing Jewish rituals or supporting Israel.

Which brings us much closer to Abram’s conclusion. The problem with the theses of the two books, he says,

is their focus on external phenomena—mainly Israel and Israeli government policy—as the source of the developments under inspection. Neither sufficiently considers the alternative: that the explanation for the criticism or distancing resides not in Israeli conduct, which is actually a minor factor, but instead almost entirely in the changing nature of the American Jewish community itself.

One of the authors gets it somewhat right. Noting voting patterns in the Jewish community, he observes:

A partial exception to these electoral habits is to be found in the Orthodox community…. Listing the various ways one can analyze attitudes toward or levels of support for Israel in the American Jewish community, Waxman begins with the “denominational divide”—that is, Orthodox versus non-Orthodox—before discussing the “ideological and partisan divide.” As he correctly writes, religiously conservative Jews “tend to be more emotionally attached to Israel” than religiously liberal Jews.

He turns to a Reform rabbi as the person who most accurately has his finger on the pulse of the American Jewish community:

As Lawrence Hoffman, a scholar at Hebrew Union College and himself a prominent Reform rabbi has written: “[T]he disappearance of the sort of ethnic solidarity that prior generations enjoyed as a matter of course . . . [and] our high intermarriage rate . . . means that Jews of the next generation will increasingly be people with no childhood Jewish memories and no obvious reason to maintain Jewish friends, associations, and causes at the expense of non-Jewish ones.”

And it is not just intermarriage that bedevils American support for Israel:

Intermarriage is of course not the only way to distinguish levels of communal solidarity; religion itself is another. Half of those who identify themselves as Jews by religion say that “caring about Israel” is “essential” to what it means to them to be Jewish, while only 23 percent of those identifying themselves as non-practitioners believe that to be so in their case…. To cite Hoffman again, “the [mere] ethnicity of people without profound purpose is doomed.”

All this means that Israel must reevaluate its relationship with the Diaspora:

Where the Jewish state is concerned, should Israel and its American supporters rely more heavily on the Orthodox, whose sense of community and of closeness to Israel is intact? Turn outward and work more closely with evangelical Christians? Reach out to growing population groups like Hispanics and Asians? …[The] beginning of wisdom is surely to understand that the problem is here, in the United States. The American Jewish community is more distant from Israel than in past generations because it is changing, is in significant ways growing weaker, and is less inclined and indeed less able to feel and express solidarity with other Jews here and abroad.

So, concludes Abrams, the conventional wisdom has things topsy-turvey. Israel’s policies are not driving people away from her support. Rather, people who have drifted away are just not so likely to stay loyal to her.

Abrams does not consider the issue of how to regard such people. How do we look at the BDS-supporters, like the New Jewish Fund? Or the J-Streeters, who want to save Israel from herself by working against Israel’s policies? Or the hard-core haters of Israel who constitute the Jewish Voices for Peace? Are any or all of them simply modern versions of the turn-coats and self-hating Jews who have often plagued the community? Following Abrams’ reasoning, we needn’t make that determination. Suffice it to call them disconnected Jews. They have moved away from a meaningful connection to Jewish peoplehood and Jewish mission.[1] Their grandchildren, barring the unexpected and unforeseeable, will not be Jewish. They are irritants at the moment, and irrelevant to the Jewish future.

Abrams also did not try to identify how the Orthodox community succeeds in supplying the two elements that Rabbi Hoffman isolated – ethnic identification and loyalty, and awareness of the purpose and mission of the Jewish people.

Here is where it gets simple for us – and a boost during this week of frenetic activity. Reading Abrams through a Torah lens, we have no trouble identifying how we propel those ideas across the generational divide. It is the seder. We understand how this magic evening transmits the key underpinnings of our faith and our peoplehood to our children, and renews their vigor and clarity to ourselves.

We appreciate the takeaway from a properly run seder. We get up from the seder table with axioms of Jewish survival etched into our core beings:

We know of Hashem’s existence.

We know a bit about Him – His power, His justice, His compassion

We know of our relationship with Him – that He has chosen us for a purpose, and will never abandon us

We know that we will outlast the others, as we always have, and be here till the end of time.

We leave the seder table tired, sapped of strength, but full of confidence and resolve. Yitzchak Shamir once said that Poles absorb anti-Semitism with their mothers’ milk. We can say of ourselves that we absorb the essence of Judaism with the matzah.

From where we sit, Abrams is really telling us that about the only way we can stanch the outflow of Israel support from non-Orthodox Jews is to invite them to a seder. Bernie himself will likely not show up. We could suggest, however, that we scour the neighborhood for those with the Bern, and cajole them into joining our seder this Friday evening. Kiruv is always a good thing.

That suggestion might strike some of us as belonging to a world of fantasy. But its logic should at least enlarge our experience of the seder. Let’s not lose the bigger picture – the enormity of the opportunity that the seder night presents. Beyond all the details, nuance and complexity, leyl seder is the time when we renew the Jew within us, and make new ones of our children.

May each and every one of us merit to take in the oros of geulah this Pesach, and live to see the complete redemption.

[1] See Meshech Chochmah, Devarim 30:2 Meaningful commitment to the Jewish people is a guarantor of returning to Sinai.