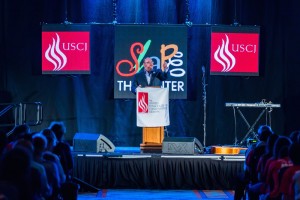 From JNS: A response article from Rabbi Steven Wernick, CEO of the United Synagogue of Conservative Judaism, and my letter replying to the response.

Branding is the way a person experiences the service or product of an organization or company. Public relations is the practice of spreading information between an individual and an organization. Our partner in the branding initiative is Good Omen—not a PR firm, but a brand consultancy firm. Rather than helping us orchestrate a “marketing blitz,” Good Omen is assisting USCJ in understanding its position in a world that changes with every generation. The essence of Conservative Judaism is not at issue; the issue is envisioning USCJ’s future in a rapidly changing generation of Jews.

I hope we can agree that Judaism is our people’s tried and tested means to refine the human condition, to provide our diverse Jewish people with a framework for living a life of meaning and purpose, and to connect us to the Divine, to our world, and to each other.

Or as my friend and colleague Rabbi Bradley Shavit Artson recently wrote in the Times of Israel, “We will win Jewish (and universal) allegiance if Judaism is robust, if Judaism augments human life, if people can thrive better because of the wisdom Judaism brings to our lives and our communities.”

Like all streams of Judaism, we seek to foster that wisdom as well as the Jewish connections and communities that support it. In this rapidly changing world, we have been challenged to maintain our numbers, but quantitative measures are only one (and I would argue a weak) way to measure success.

Where we differ is that Conservative Judaism celebrates and finds its strength precisely in the diversity of Jewish wisdom and practice you denigrate. We believe that the Jewish people have thrived throughout history precisely because of their ability to welcome a wide range of ideas and the people who hold them — all of them — no matter their denomination or lack thereof.

This is, of course, not a new idea. The Talmud provides a parable lauding God’s creative prowess: “To express the grandeur of the Holy One (Blessed be God): for a person strikes many coins from a single dye and all the coins are alike. But the Sovereign of Sovereigns…strikes every person from the dye of the First Person (HaAdam Genesis 1:26) and yet no one person is quite like another.” (Mishnah Sanhedrin 4:5)

And this is just one example of the fundamental Jewish idea that pluralism is a positive value. Each human being, each Jewish person, each kehilla (community) is a piece of a larger picture that when held together makes us complete. Holding diverse opinions together is exactly what God demands of us.

The goal of our branding initiative is to help USCJ assure the alignment of its shared Jewish vision, strategy, people, and program. We provide guidance, information, and tools to enhance Jewish community and support meaningful Jewish connections, not just for Conservative Jews, but for all whose Jewish journey can be nurtured by our vision. The important work we are doing, and will shortly bring to the greater Jewish world, is a thoughtful, intelligent, and appropriate adaptation to the world in which we live.

Rabbi Steven Wernick is the CEO of The United Synagogue of Conservative Judaism.

Letter to the editor: keep the focus on Jewish substance

Rabbi Steven Wernick’s response (“Rebranding helps USCJ envision its future in a rapidly changing Jewish world”) to my op-ed, “Conservative Jews deserve more than PR,” is very interesting — yet saddening. Rabbi Pesach Lerner and I wrote about Jewish substance, and he differentiated between PR and branding. Regardless of that narrow distinction, neither can save a company selling a product of little interest to consumers.

His quote from Rabbi Bradley Shavit Artson is apt indeed: “We will win Jewish (and universal) allegiance if Judaism is robust, if Judaism augments human life” (my emphasis added). It’s not about PR or branding, it’s about Judaism.

In that vein, Rabbi Wernick points out that “those impacted by Conservative Jewish communities” are “more likely” to be Jewishly educated and involved. More likely than whom — those who connect with no Jewish community at all? He makes a tremendous leap, making the bold assertion that these Jews are “highly engaged.” All the evidence at hand refutes that claim entirely.

He similarly states that we “denigrate” what he describes as a “diversity of Jewish wisdom and practice.” Yet we spoke of the beliefs, standards, and educational opportunities that the Conservative movement itself once considered mandatory. Diversity in Jewish practice is found in flourishing Jewish communities of North African, Iranian, Yemenite, German, Lithuanian, and Hungarian origin — often within blocks of each other, or side by side at the holy Western Wall.

Laxity vs. involvement is a poor-man’s diversity, and neither PR nor branding offers a rich solution.