A Shot in the Arm for German Orthodox Liturgy 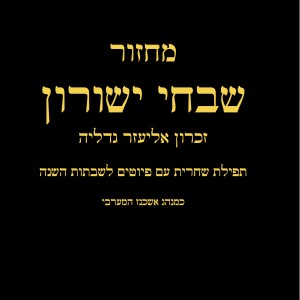 It is often sad to see. Whereas the majority of the post-World War II communities representing the traditions of European Jewry have experienced sustained and escalated growth in number and strength, German Orthodoxy has for the most part been on the decline, after its initial successful transplantation and robust blossoming in various lands after the War. The burgeoning yeshivish and Chassidish communities, whose exceptional vibrancy and mushrooming has been duly noted by sociologists and statisticians in numerous studies, stand in stark contrast with most contemporary German Orthodox communities, the majority of whose members have assimilated into yeshivish or Modern Orthodox life, usually retaining at most a mere inkling of the customs, outlook and overall uniqueness that has marked German Jewry for a thousand years. Yes, there are those who have held fast and exactingly perpetuated the German Jewish traditions, but they are the clear minority.

What happened? Why is it that a Satmar chossid who moves out of Williamsburg will undoubtedly move to Kiryas Yoel/Monroe, and a yeshivish family that leaves Flatbush (Midwood, to be proper) will move to Lakewood or the like, as they feel a need to be part of a community where their specific traditions are preserved and lived, whereas German Orthodox Jews so often willingly assimilate into other Orthodox milieus without second thought, hardly retaining much of their heritage? Or, better yet, why is it that Chassidish and Sephardic talmidim at Litvishe yeshivos retain their distinct ways, while they absorb and fully immerse themselves in the high-caliber learning at these yeshivos, whereas the same retention of original group identity is not usually found among German Jews who enter the “outside” yeshiva system or other differing venues of Orthodoxy? (No, this article is not an attack on German Orthodoxy. On the contrary, I am pained by its decline and the deterioration of its beautiful legacy. A sizable percentage of my own lineage is of German extract; I am not an outside critic.)

I believe that the issue ultimately boils down to the historical, centuries-old religious destruction wrought by the Reform movement (and the general phenomenon of assimilation) in Germany – destruction whose impact was more profound and far-reaching than perhaps realized.

In Rav Breuer: His life and Legacy, Dr. David Kranzler and R. Dovid Landesman explain the abject levels of ignorance in many Orthodox communities in Germany during the previous century, as a direct result of Reform’s successful dismantling of the traditional chinuch (Jewish education) infrastructure. The former homeland of so many Gedolei Ha-Rishonim, preeminent Medieval Torah authorities, was reduced to a locus in which many Orthodox rabbis had no choice but to tell their congregants stories, rather than deliver shiurim, note the authors of this important book. Whereas the monumental efforts of luminaries such as Rav Samson Raphael Hirsch, Rav Azriel Hildesheimer, Rav Dovid Zvi Hoffmann, Rav Salomon Breuer and others had a seismic impact on their immediate communities and institutions and far, far beyond, there was so much damage that needed to be addressed, such that it was simply not possible for these and other stars of German Orthodox renewal to totally undo the systemic religious destruction and deterioration throughout the country.

The effects of Reform impacted German Orthodoxy at the highest levels, as evidenced most glaringly by major pre-War German communities’ engagement of Torah authorities and rabbinic leaders from the East, the most notable of whom were Rav Yechiel Yaakov Weinberg (the Seridei Aish) and Rav Markus Horovitz. (Rav Weinberg distinguished himself in Germany well before being elevated to rabbinic leadership there, yet German Orthodoxy itself had at the time not produced many others in his likeness.) There were few yeshivos in Germany and a handful or two of major indigenous Orthodox leaders, as the impact of Reform was pervasive on so many levels, including that of Torah scholarship.

It is against this backdrop that we can perhaps view the relatively recent stagnation and atrophy of much, but certainly not all, German Orthodox life. It is clear that for the better part of the past few centuries, the highest echelons of Torah learning were to be found in Eastern Europe; many families in Germany, including those of Rav Shimon Schwab and a good number of others in Frankfurt am Main (as well as the family of one of my rebbeim, from Baden, Germany) sent their sons to the East for yeshiva study. In fact, I remember my maternal grandmother, whose father originally hailed from Beelitz, Germany, relating to me how she recalled her father telling her as a girl about the many prestigious yeshivos in Lithuania. The center of Torah had moved definitively to the East, as assimilation and Reform did their best to minimize it in the West. Hence can we perhaps understand the relatively recent and contemporary trend of large numbers of German Orthodox Jews shifting affiliation toward the yeshiva movement and its lifestyle, as once these people got a taste of higher Torah learning in their original communities, they gravitated to its obvious epicenter and did not take along with them their native group identities, perhaps lacking the confidence or appreciation to retain their own mesorah (tradition) while simultaneously steeped in a first-class Eastern European learning environment. And, in the opposite direction, those German Orthodox Jews who were not exposed to a more advanced or intense Torah learning experience may not have fully grasped the profound significance of holding fast to one’s own unique traditions and Torah leadership, and therefore following the crowds out of German Orthodox kehillos (congregations) was not well recognized by these people as the abandonment of an important mesorah.

In any case, it is painful to witness the voluntary dissolution/implosion of much of German Orthodoxy. The more one learns Torah and studies liturgy, discovering therein the beautiful, deep and ancient bases and traditions of German Jewish religious practice, the more acutely one acknowledges the loss.

However, there is yet a bright side of the picture. While it is true that some German Orthodox Jews and congregations have heroically and steadfastly resisted the forces of this internal assimilation, thereby preserving their heritage and even their weltanschauung, there is now a renewed interest on the part of many to perpetuate and disseminate the legacy of German Orthodoxy.

The main organ involved in this effort is Machon Moreshes Ashkenaz/The Institute for German Jewish Heritage, whose network of shuls, publications, nusach (liturgical rendition) projects and educational programming has achieved great popularity and acclaim. Yet there are also individuals throughout the globe, whose private initiatives to perpetuate and enhance the heritage of German Orthodoxy have yielded first-rate works that should not go unnoticed.

The latest such work is Machzor Shivchei Yeshurun, which features a complete, year-round selection of Western Ashkenazic piyyutim, with rich, historical background and thematic commentary, as well as halachic insights and explanations of various minhagim. This exquisite work, co-published by Goldschmidt Basel AG/Rodelheim, is the product of Rabbi Dovid Roth, along with his team of experts, and it carries the important approbations of Rabbi Binyamin Shlomo Hamburger, who heads Machon Moreshes Ashkenaz, and Rabbi Arie Folger, whose masterful Western European rabbinic leadership is accompanied by his vast and intense knowledge of that region’s liturgy and customs. Each of the approbations is a detailed and elaborate essay about the origins and halachic significance of piyyutim – each a unique must-read piece. (I also urge readers to consult Rav Soloveitchik’s discussion of piyyutim on pages 76-77 here, and elsewhere.)

Machzor Shivchei Yeshurun also features a beautiful and elaborate exploration of the structure and categorization of piyyutim, including charts that make it all quite simple (even for people such as I, for whom the world of piyyutim is pretty much like a foreign country). This 796-page mega-volume includes annotations and extensive supplemental notes, references to variants and other traditions, source citations and a lengthy appendix, and is presented in the form of a complete Shabbos morning siddur, so that mispallelim (worshipers) need not use a separate sefer of piyyutim in addition to their siddur. It’s all there, from Adon Olam/Birchos Ha-Shachar through the end of Mussaf, and everything that is recited in between, with brand new and beautifully formatted text. (Please click here to view a few sample pages. The introductory price is $18 for pickup purchase from local distributors; the online price includes shipping.)

May the author of Shivchei Yeshurun and his team see great success with this important publication, and may the entirety of our people appreciate and perpetuate our sacred traditions.