Bernie’s Kibbutz and Mine 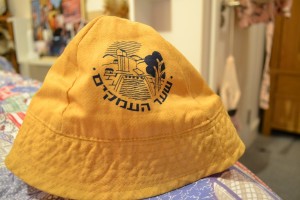 The disclosure of which kibbutz Senator Bernie Sanders spent time at in1963 was red meat for the voracious purveyors of what, regrettably, passes for political commentary these days.

Mr. Sanders – now the first Jew to win a U.S. presidential primary – lived for several months in Sha’ar Ha’amakim, near Haifa, a kibbutz affiliated with Hashomer Hatzair, the secular, Zionist-socialist movement. (It was quite an active one during part of last century; this one, not so much.)

Right-wing media seized on the socialist element, with the American Thinker featuring an op-ed with the headline, “Bernie Sanders Spent Months at Marxist-Stalinist Kibbutz.”

On the other side of the partisan divide, various blogs attacked Mr. Sanders for having been part of a kibbutz that was founded, in the words of radical leftie Philip Weiss, on “ethnic cleansing.”

For my part, the disclosure of Sanders’ sanctuary evoked memories of my own time on a Hashomer Hatzair kibbutz – beautiful Ein Hashofet, a mere ten miles from where Bernie bedded down less than ten years before I arrived in the area.

I spent only two days at Ein Hashofet, having traveled there before the start of Elul zman in Yeshivas Kol Torah to visit one of the kibbutz’s founders, my uncle Nachman.

Back in pre-war Poland, when my father, shlit”a, was a little boy, two of his older brothers became involved in a Zionist youth enterprise and surreptitiously made their way to Eretz Yisrael. My father was determined to study Torah and, after he became bar mitzvah, just as the war broke out, he left his parents and other siblings to learn in a Novardok yeshivah that had been relocated to Vilna. Eventually, the Soviets sent him and his chaverim , along with their Rosh Yeshivah, Rav Yehudah Leib Nekritz, zt”l, to Siberia. Eventually, my father emigrated to America; of his large family, only he and his two brothers in Palestine survived the war.

The kibbutzniks were very welcoming of the young yeshivah bochur who had come from America (no, he told them all, he didn’t know their cousins there) to study in Yerushalayim. I must have seemed, and definitely felt, out of place there. But I was “Nachman’s nephew,” so I got the royal treatment.

During my stay at the kibbutz, I lived on Tnuva products and some packaged foods I had brought with me. When it was time to leave, some of the kibbutzniks gave me small gifts – a Hebrew booklet about Van Gogh, a plastic Egged tik, some doodads – that (despite the place’s strict socialist ethos) they possessed. I was very touched, and remember the residents’ kind sentiments fondly to this day.

My greatest takeaway, though, was from my uncle, in the words he spoke a year later, when he visited me in Bayit Vegan as I prepared to return to the U.S. Tears welling in his eyes, he wished me well and said, wistfully, that he wondered if, had he retained his Jewish observance, his children might have remained in Eretz HaKodesh. Most of them, despite their father’s dedication to the Land, had left Eretz Yisrael to find their fortunes in other places. I didn’t know what to say, and just hugged him goodbye.

Fast-forward fifteen years. My Israeli uncle and aunt, visiting the U.S., were driven by my father, shlita, from Baltimore all the way to Providence, Rhode Island, where I and my family were living at the time. It was wonderful to see them again, and, at some point, my uncle mentioned – and there was pride in his voice – that the kibbutz had recently put mezuzos on its doors.

I noticed, too, that he had brought with him a pair of tefillin.

My uncle is now long gone from this world, but I’m reminded of the Gemara about a man who betroths a woman on the condition that he is a righteous person (Kiddushin 49b). Even if the man was not known to be righteous, the Gemara says, if the woman accepts his kiddushin, they are married. Because “perhaps he mused about repentance in his heart.”

A hirhur teshuvah – a “mere musing of repentance” – can change a person. And what matters more than where we are is the direction in which we are headed.

I don’t know if Bernie Sanders’ few months on a kibbutz had any impact on him. But, as I recall my uncle’s words about his children, and those tefillin, it seems to me that his more than half-century on his kibbutz, ironically, may have yielded him a keener perspective.